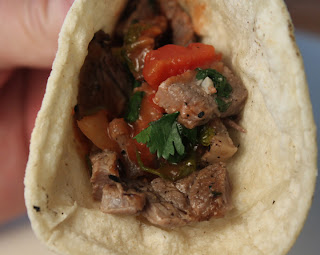 Probably the most popular of tacos, Carne Asada has been adapted by American fast food conglomerates into cheaper ground beef tacos. But the American taco pails by comparison.

The Mexican version uses more expensive steak for their tacos and the price is usually a dollar to a buck twenty-five at most taco trucks -- a great cheapskate deal. And now the Border Crossing Chef will guide you through the simple steps of making your own. I also include a tasty marinade recipe for the steak. 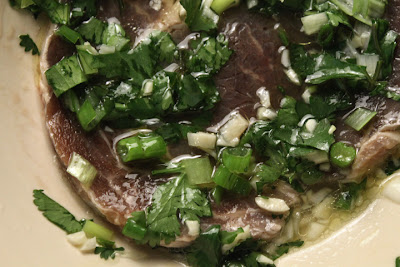 Steak tacos from the Chintzy Chef? Well it can only happen because I find one dollar three ounce rib-eye steaks at my local market and sometimes in 99c Only Stores. This small, but tasty steak, makes enough for a couple of Carne Asada Tacos. 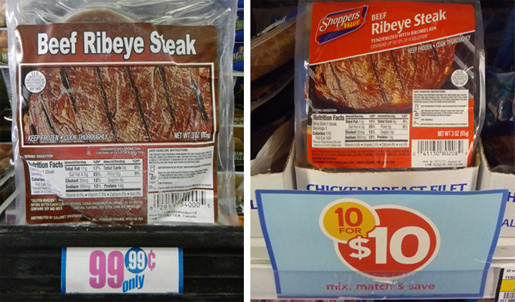 In  Latin markets they sell "flap" meat, which is thin sliced and ready to marinate. (In Latin Market meat deli cases they also have steak in the marinade, that's ready for the grill.) At regular markets you can use skirt or flank steak. 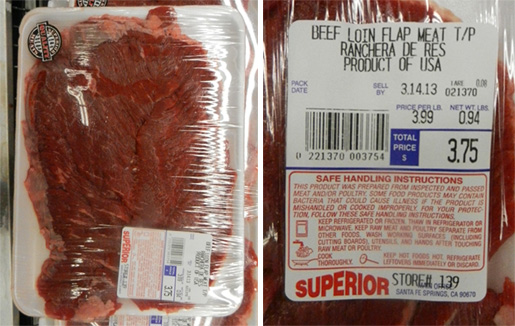 A marinade of oil, lime juice, onion, garlic, cumin and cilantro is used to flavor the steak. As for the grilling, I've seen it done a couple of ways. Mainly it's done on a flat top grill (typical stove top) or the best way, over an open flame.

For the taco preparation it's really simple, just chop up the steak when done, add to a warm tortilla and top with chopped onion and cilantro, your favorite salsa, or my Pico de Gallo (recipe here.) 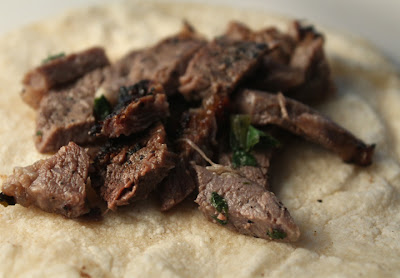 Unlike my previous taco recipes from last month, slow cooking Carnitas and fatty Chiccarones (fried pork skin), my version of Carne Asada Tacos are quick to make and easier on the palate. 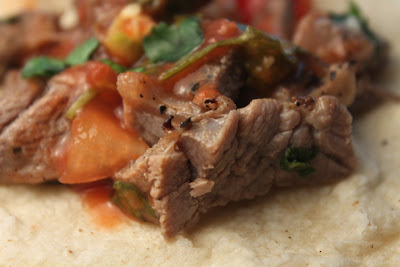 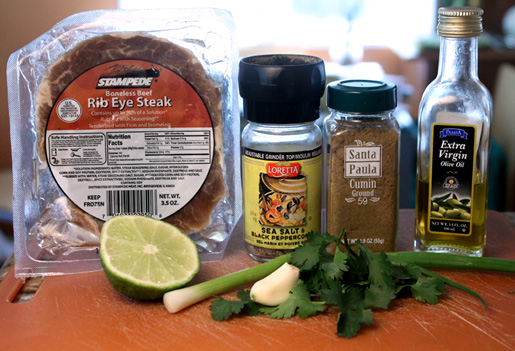 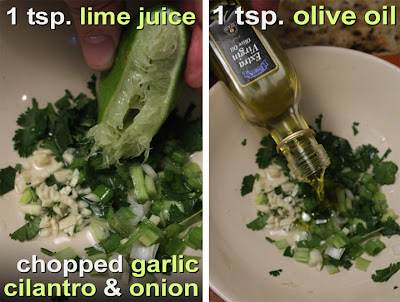 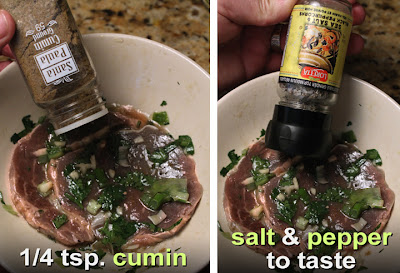 Add steak and coat both sides. Allow to marinate at least half an hour in the refrigerator. But don't marinate for more than a hour as the acidic citrus juice will start to cook the steak. 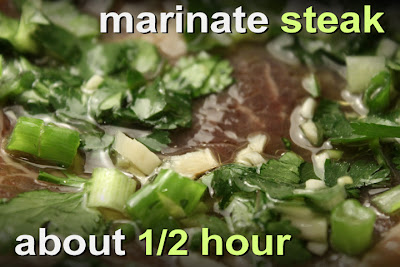 Before you cook the Carne Asada have all your taco toppings ready to serve. While the meat is cooking you can heat up the corn tortillas for tacos, or flour tortilla for a burrito. Go hear for my homemade Pico de Gallo salsa. Of course, you can use your favorite jarred salsa. A simple combination of chopped onion, cilantro and a slice of avocado is a great taco topping. 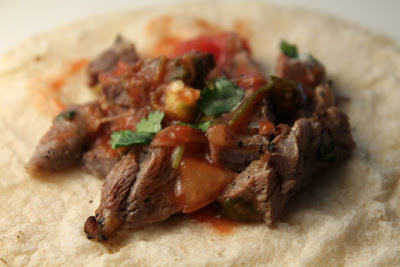 You can grill the Carne Asada several ways. I fired up the BBQ grill and cooked one side until charred, then flipped it over and finished cooking it for 30 seconds or so until done. (If you cook each side for the same amount of time then the steak will not char well, so better to have one side cooked perfectly.) 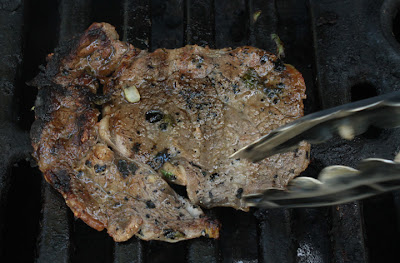 Most street taqueras just grill the marinated beef on a flat top grill. So you could just fry up the steak in a hot frying pan.

Finally a nice method is to use the oven broiler. You get a good char and it's convenient. Again I would broil one side until well charred then flip the steak and finish cooking it through for a few seconds more.

However you cook the Carne Asada, chop it up just before serving.

Hindsight
If you want to feed the family Carne Asada Tacos then you will need to get a large piece of steak, like thin sliced flank or skirt. You could use sirloin or tri-tip but will need to slice the large steaks thinner. An easy way is to semi-freeze the pieces for an hour or so in the freezer to firm up the meat to make slicing easier.

If you are just frying up the steak on your stove top you could chop up the meat into bite-sized pieces first -- that's the way they do it at most taco trucks and taquerias.

As for the marinade ingredients just increase the amounts: juice of 2-4 limes, 1/2 bunch of cilantro, about 4 whole green onions (or 1/2 white or yellow onion), 1/4 cup of olive oil, 2 tablespoons of garlic, 1 teaspoon ground cumin, and salt and pepper to taste.

I like to heat my tortillas in another frying pan over a medium heat for a minute on each side until soft and pliable. You could also microwave tortillas for 30 seconds or so.

You can make a burrito instead of a taco. Just heat up a can of pinto beans and make my  Mom's Mexican Rice (recipe here.)

Hello blogger!
What a great blog this is! I think you had a great idea and executed it nicely. I really like your simple recipes and the .gif pictures of food being prepared are simply genius. They really make your blog stand out.
I think that it would be really worth to share your recipes with more people and I believe I could help to get you a fresh audience.
I am searching for passionate writers to join our community of bloggers - glipho.com
Please check us out and drop me a line at hubert@glipho.com
Best, Hubert

Definitely interesting.Your gif photos are pretty enticing! thanks for sharing.

Searching for "flap meat marinade", I found this site..
I've been happily bouncing from page to page for the last 1/2 hour or so..Great information, presented in a fun manner.. Glad I found you.. :O)

Wow sounds like a impressive but super easy way to have a fiesta! Got a family get together this weekend gonna try it!