The 99 Cent Chef will travel for food. I was invited to shoot a segment for Public Televisions' KCTS in Seattle, Washington last week. 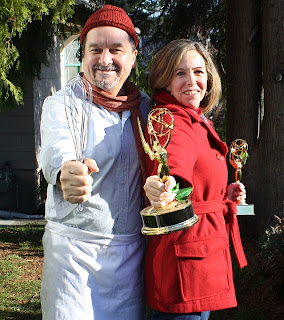 Emmy-awarded journalist Jenny Cunningham was our kind host and responsible for the visit. I was to prepare appetizers for her book group to be filmed from start to finish. Was it a disaster? Or a success? Either way you will enjoy the next five days as I assemble a video diary of my fun time in cool Seattle -- and post it here. I don't know how many short videos are on the way, but come back and you will know about as much as I do.

Over the next 5 days the videos will include: "Breakfast in Seattle", "Dining in Ballard at King's," "Throwing Salmon at Pike Place Fish Market," "Great Figgy Pudding Caroling Competition," and "KCTS Cooking Show."

The Chef, his wife, and hosts Jenny and Kevin mingled with carolers competing on Pine Street in downtown Seattle. The real winners are the 10,000 or so scarfed revelers wearing floppy-horned reindeer and Santa hats who get to hear multiple caroling groups on every corner singing and performing Christmas classics - some performed straight, others tongue-in-cheek. The Chef had his camera to record this once-a-year festive street party and is happy to share it with you.


My Seattle video diary continues with brew pubs, blue-cheese burgers and furry hats! The Chef gives you a two-minute tour of Ballard, a waterfront community just Northwest of downtown Seattle. It's bohemian - similar to L.A.'s Silverlake neighborhood, and I liked it immediately.


Jenny and Kevin keep things moving; it was a grab-a-pint/burger-and-go tour. We landed in King's, a dark pub with a long bar serving Hamms on tap for $2.50 a pint, and a rustic dining room that extended outdoors. I ordered a B & B Burger, it comes with blue cheese and bacon, a great combination on a chilly day. Also, I ordered sweet potato fries - I think I am over it; you can't eat these fries with ketchup, so I'll stay with regular potato from now on. Hale's Creme Stout was my local beer of choice. It's served with a creamy head and the flavor is thick, sweet and bitter. Delicious. Ballard Ave is a great street to browse.
Ballard Ave. - Seattle Diary Part 3


Bears are not the only mammal that can snag a flying slippery salmon -- just watch The Chef display his catching skills in Seattle's famed Pike Place Fish Market, where salmon tossing is a lively tradition.

Located on Elliot Bay, Pike Place Public Markets' colorful food stalls hold bins stacked with every variety of Washington apple: from Aurora and Jazz, to Pink Ladies and Honeycrisp. This is the place to get locally grown, gold-hued Chanterelle mushrooms, black truffles and of course, all manner of seafood, especially salmon. My wife wisely selected a tasty variety of Washington apples for our holidays -- all I got was this video! I hope you enjoy it.
Throwing Salmon - Seattle Diary Part 4


The KCTS show, About The Money features The Chef's segment called "Gourmet For Less" which aired Friday night. I'm featured in a book club party atmosphere -- cooking 4 recipes behind the scenes in the kitchen: Roasted Red Pepper Hummus Martinis, Vietnamese Banh Mi Sandwiches, Stuffing Cupcakes With Cranberry Frosting and Mini-Banana Puddings. Host Jenny came up with the theme and we managed to pull it off.


Lights, camera, makeup, and cue laughter! In this last Video Diary from Seattle I take you behind the scenes of shooting my cooking segment for Public TV's KCTS, Channel 9. Our intrepid problem-solving, and new 99 Cent Players, producer/hosts Jenny and Kevin helped in-and-outside of the kitchen to make the shoot entertaining and fun. They deserve a heartfelt 99 thanks. More thanks to the cameramen and crew at KCTS for making this Chef look good. And final thanks to my wife Amy for the companionship and sous chef kitchen duty!

Good videos Chef! Looks like Seattle was a blast.