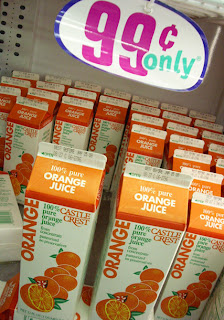 I picked up a few one quart cartons of 100% pure pasteurized orange juice and a couple of 12 slice packages of Pepper Jack cheese yesterday at this 99c only Store. A pretty damn good deal. The orange juice is great in a breakfast smoothie -- just blender a banana, a cup each of orange juice, soy milk, yogurt, a few cubes of ice and a small carton of strawberries ( all the above are 99c only Store items.)
Also, the Chef has been known to knock back a tumbler of 99 cent airline bottled gin and juice (orange) during grueling midnight blog sessions. 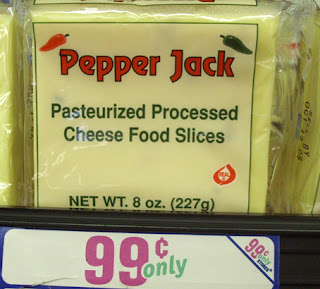 As for the Pepper Jack, the Chef likes his quesadillas -- add two slices of pepper jack folded into a flour tortilla (a 99c only Store staple) and sautee until the cheese melts. This Pepper Jack uses jalapeno peppers and gives a hot kick; it also melts divinely. Both Deals of the Day have been available off and on, the last couple of months. Look for them at your local 99 Cent Store.