Well, seeing is believing and here it is, a 15 inch Vegetable & Shrimp Egg Roll for 99 cents. Actually, when you line up this package of 3 Egg Rolls end-to-end they total 15 fried inches of Chinese appetizer.

And this Deal of the Day is not bad. I've been curious about these Egg Rolls I've seen in the frozen food section of my local 99c only Stores since forever it seems -- they often stock them. Frozen fried food is not on the top of my noshing list, but I finally had to take the plunge and try it out. 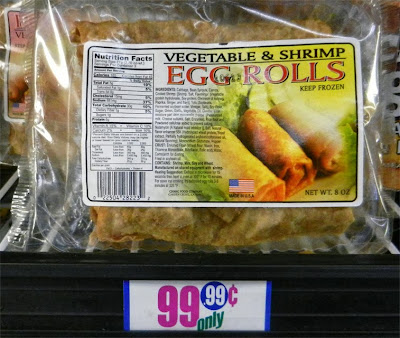 There are no package directions on how to prepare them. Ideally you would heat them up in the oven to get a crisp skin, but I hate to waste so much fuel; so I just microwaved them a minute and a half, then finished them up on a stove top grill for another 5 minutes -- rotating each Egg Roll to get an even crispness. This technique is the fasted way to get a crunchy wonton shell with a steaming hot center. I also set out a small bowl of soy sauce for dipping. 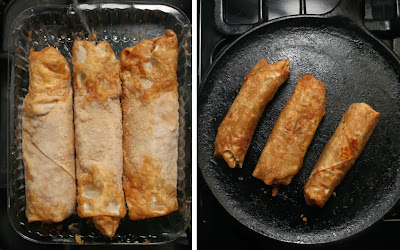 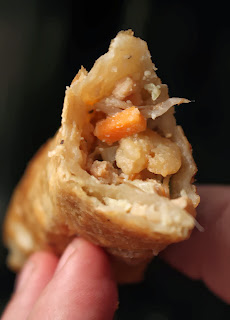 The fried outer dough tastes like your typical Chinese appetizer fare. The ingredient list is long but basically you get plenty of steamed cabbage, carrot and green onion, with a few bay shrimp. Actually the bay shrimp are so small they should be called "inflatable pool shrimp." But I didn't expect much seafood for 99 cents.

The filling was moist, slightly sweet, and the veggies were shredded and substantial; that is were you get your money's worth. The carrot and cabbage even had a little crunch. Also on the ingredient list was mozzerella cheese and cheese curds! Not much but you hit little pockets of the stuff, so there is an overall creamy texture. 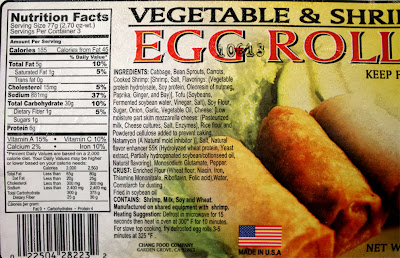 As a convenient way to get Chinese takeout on the cheap this is one way to go. So on The 99 Cent Chef's Deal of the Day rating scale of 1 to 9, 9 being best, I give this 3 pack of  Vegetable & Shrimp Eggs Rolls a 6. You could probably even get away with serving them at a party. 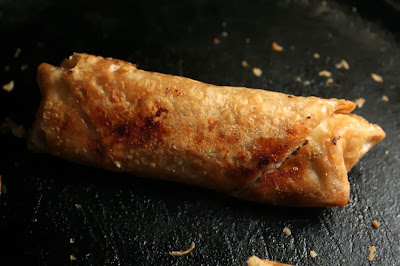