Sometimes the journey is as interesting as the destination. Come along on the road to Monument Valley for a cheap$kate junket in my latest Indian Summer Vacation Video. I'll be riffing on Hollywood cowboy John Wayne and stirring up the pot about the Washington Redskins football name controversy. Plus, you'll get Cheap$kate Tips and a fun point-of-view travelogue experience filmed in majestic Chefscope! 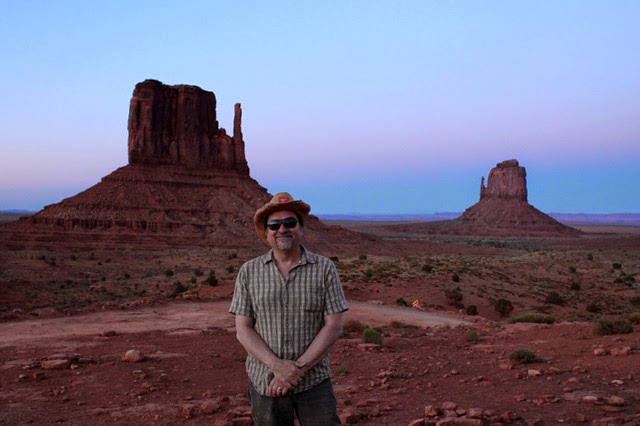 If you are traveling from California, make sure to get just enough gas to cross the Arizona state line. We stopped off the 10 Freeway in Blyth, California - right on the border. It was a lunch break at Carl's Jr. for burgers. (Oh, how I miss the days when their flame-broiled burgers were cooked to order - no longer, as the beef patty I had was as dry as Styrofoam between 2 slabs of cardboard.)

I had the presence of mind to ask the burger-joint manager if I should fill up my gas tank here, or continue driving into Arizona for gasoline. He said: My wife always points me to the border, since it's only 5 minutes away, for gas that's 50 cents cheaper than here in California. 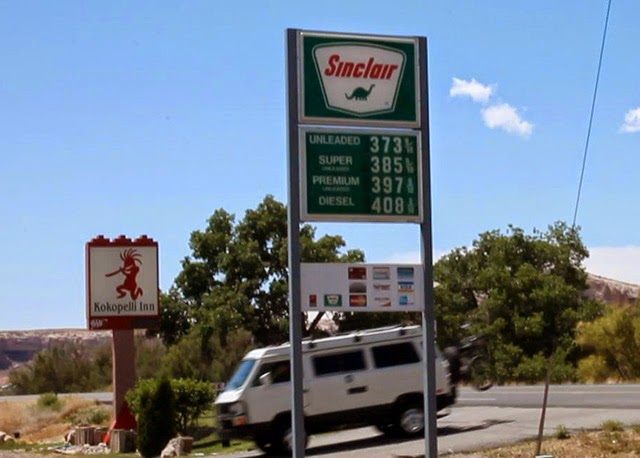 Most unleaded prices were from $3.50 to $3.60 per gallon. The above prices are on the high-end for Arizona. 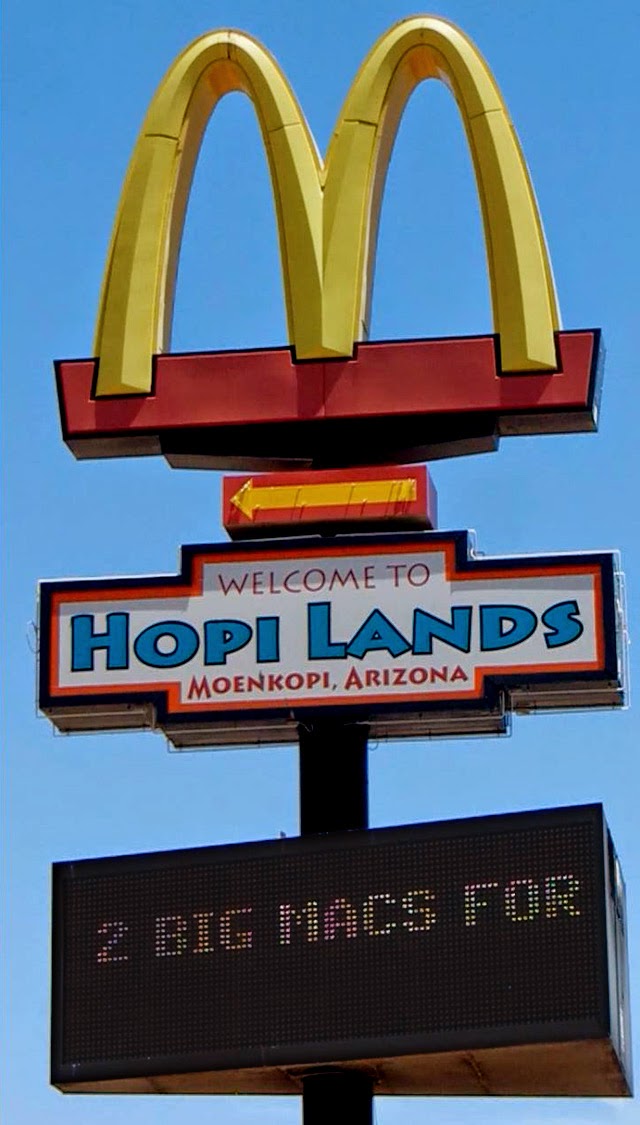 We continued on. Once we were a few hours into Nevada, heading to Flagstaff for our first overnight stay, we began to see signs of Indian life - towns with Native names and market/gas stations selling Frybread and cool trucker hats and t-shirts.

It was hot and dry the whole way, so make sure your car air-conditioner is working. My wife and I were tempted to stop many times for roadside stands selling Indian jewelry and other items, but figured there would be plenty of opportunities further down the road. But the most difficult sights to pass were the frequent highway landscape viewpoints, although I managed to camera-grab as much as I could through the driver or passenger windows, as you will see in my video at the end of this post. Although there were miles of barren road, we always managed to find convenient places to stretch and fill up. 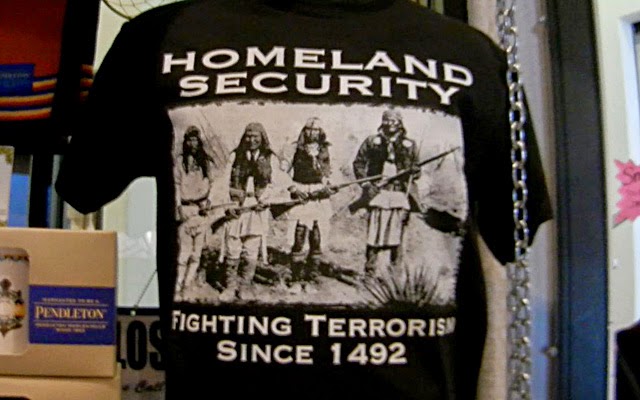 At the end of our first travel day we spent the night in a cheap motel on the edge of town in Flagstaff, Arizona. We stopped for breakfast the next morning at a boisterous Route 66 diner called Mike & Ronda's The Place (click here for Yelp reviews and the address.) Nothing fancy, just huge plates of food priced reasonably. I had a tasty breakfast of two eggs, hash browns with two giant biscuits smothered in gravy for the incredible cheap price of five dollars! Whew, I managed to finish it, but just barely. I recorded it for posterity and it's in the video - seeing is believing! 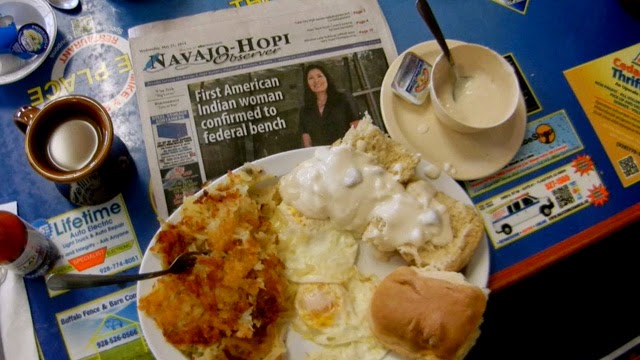 Breakfast in Flagstaff, Arizona at Mike & Ronda's The Place.

After a couple of hours on the road, the earth soon turned deep red from the erosion of sandstone. Iconic western movie vistas began to appear around turns and topping hills. 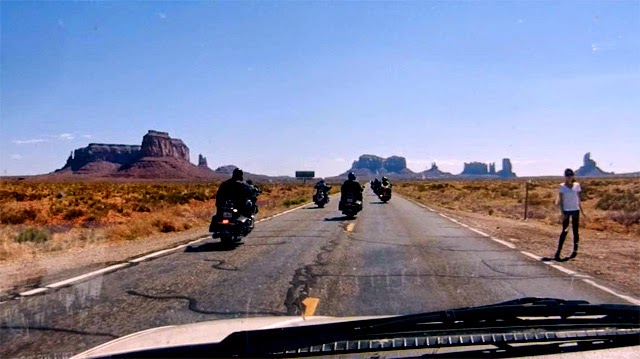 Pulling over one last time into a gas station/market, before we crossed into Utah and onto the Indian reservation surrounding Monument Valley, I noticed the cold cases lacked beer and wine. I soon found out why, or at least the law - no alcohol sold or allowed on Indian Reservations. I had a cooler with a couple of 24 ouncers and my wife had box wine. I figured as long as we keep it low key and out of sight we would not have any problems. So this is another tip for you, be cool and don't flaunt it - be respectful of local customs and laws. 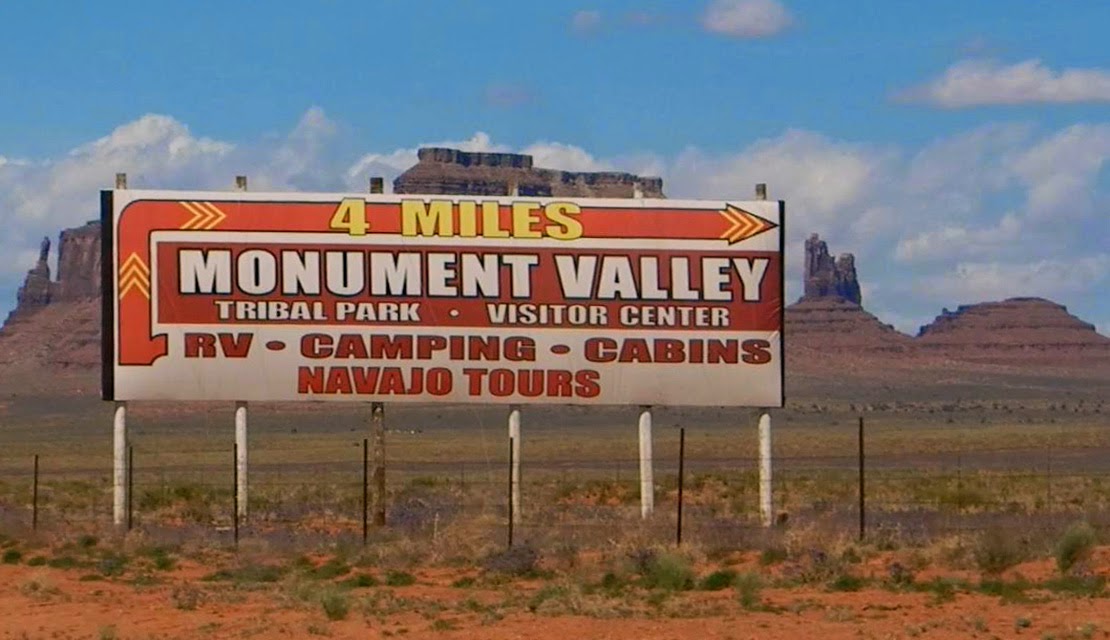 We arrived in Monument Valley around noon and checked into Goulding's Lodge and Campground (click here to see all they have to offer.). There is a large gift shop were you check in and just down the road is a well-stocked grocery store. Plus there was a screening room that was showing, later that night, John Ford's "She Wore a Yellow Ribbon" with, of course, John Wayne, and shot on location in Monument Valley. I'll never watch an old Western movie the same way again after this trip. Check out the movie trailer below.

I thought it interesting how John Ford and his old Western movies are celebrated here -- as the portrayals of Indians are often as bad guys , stilted and lacking subtlety of character. But the director put Monument Valley on the map, at least to the general public. And he insisted on shooting several films here - long before there were paved roads and common conveniences. Now the place is hopping with tourist from all over the world (especially Germans!)

It was a pleasant stay at Goulding's Lodge, about $92 dollars a night for a nice cabin. There would have been enough room for at least five. Along with a double bed, there were bunk beds and a loft space with one more mattress. Again check out my video to see what it looks like inside. There are slots for RV's and grounds for tent camping, too. This would be our last night for the rest of the week with a comfy bed. For the next few nights we'll be in a tent or Navajo Hogan. You'll soon see what I mean in later blog posts. 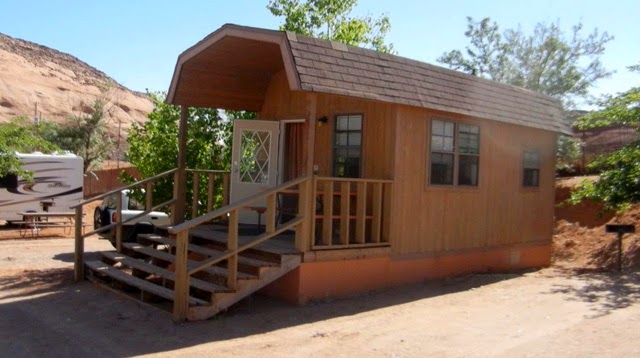 We had enough time to unpack and eat a quick deli meal before heading out on our Monument Valley tour at 3pm. Well, you'll have to come back to see that part, and believe me, it's a doozy of a video - probably the wildest one I've made yet! So hit the play button below and take a front seat ride with the Cheap$kate Excursionist, and it won't cost you a cent.

99 thanks to Amy for all the hard work planning and reserving hotels and camping slots for us, and everyone that put up with me waving my camera in their faces! Special gratitude to Mike & Ronda's The Place and Goulding's Lodge and Campground.
Posted by 99 Cent Chef at 7:56 PM

This is gonna be one cool series. I lived out west for many years as a child--from west TX, to Wyoming, to Cali, to Montana and South Dakota, and saw the desert in between. In Montana, we lived on the Indian reservation and I went to the reservation school. I looked like an Indian so I fit right in. My aunt lived in the desert in AZ and we lived with her for a few months as well. So this really takes me back. The 'last gas for 100 miles signs' were part of the landscape, as were car radiators overheating. This makes me want to come back and visit. You and Amy take some really fun vacations! TFS.