I would not bother following the package directions for this Deal of the Day. 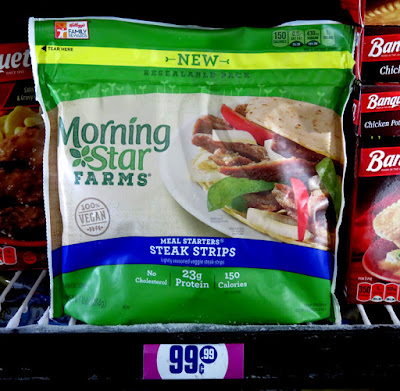 Veggie Steak Strips by Morning Star Farms needs slow braising like a cheap, tough cut of beef, not the suggested 4 minutes of microwaving with a bit of water unless you want a chewy, rubbery, and tough piece of fake meat. 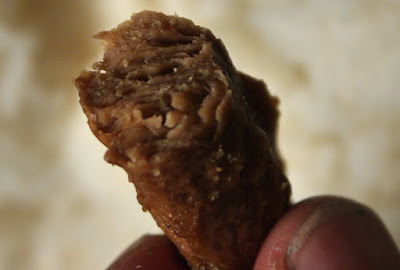 Now you don't need to braise this Deal of the Day in a sauce for hours - these Veggie Steak Strips tenderize in about half an hour - about the time it takes to make a pasta sauce, or a pot of quick-cooking legumes like split green peas or lentils. 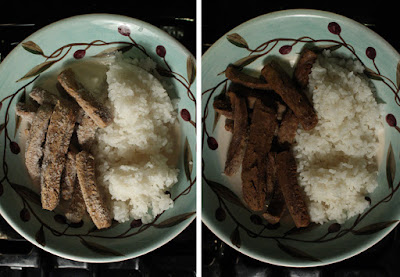 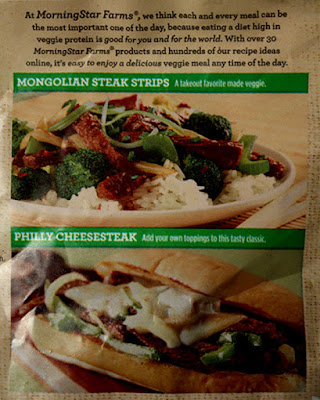 The back of the package suggests microwaving the Veggie Steak Strips and making a Mongolian Stir Fry or a Philly Cheese Steak Sandwich. Sounds good, but only if you like chewing on strips of shoe leather or rubber bands. I tried microwaving a few strips with cooked rice. The result was not pretty. While there is a slight beef flavor, the texture was way off the mark for beef steak slices. The strips stayed solid and did not shred; they were like waterlogged popsicle sticks.

The ingredient list is short for a meat substitute, made mainly from soy. Most of the beef flavor comes from spices, and the overriding taste is powdered garlic and onion, and that's fine with me. 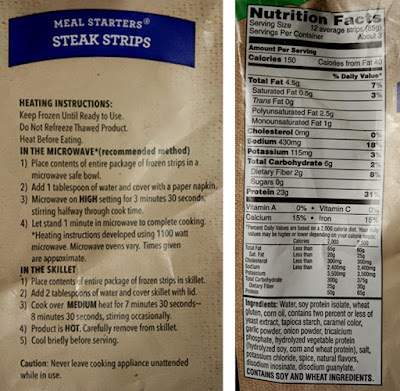 I was puzzled why the makers recommend microwaving this product. I took a different path and went the slow braising path. This is the way to go for a palatable experience.

I added some Veggie Steak Strips to my pot of dried split green peas (to see my video recipe click here.) Since dried green peas cook in about an hour, I thought this may tenderize the strips. They did, and the result was successful. The Veggie Steak Strips were a decent substitution for a ham hock or ham bone - just what a vegetarian would like.

The Veggie Beef Strips became tender just like I imagined they should be, but I was worried they would break down to mush. Well, they still stayed slightly firm and even shredded like a tough piece of meat that had been braising for a couple of hours.

It seems strange that Morning Star Farms would not make their Veggie Steak Strips tender, to begin with. I guess they think steak should be over-firm? Maybe it's all about the speed of delivery via microwaves. And that's probably why the Veggie Streak Strips ended up in 99c only Stores.

Anyway, it's best to use this Deal of the Day after it has been tenderized as I suggested earlier. I would add them to slow cooking sauces for at least twenty minutes to an hour. You can also add the strips to a steaming a pot of your favorite rice dish. 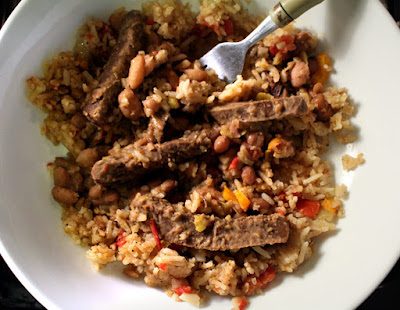 Morning Star Farms should try for veggie ham slices, but next time please make sure the veggie protein is tenderized, before freezing.

The ingredient list is pretty hefty... soy derivatives, wheat gluten and lots of odd sounding chemicals. I think maybe that’s why it’s in the 99 cents. But still! I love that place.

Yea, all vegan foods are not the same quality - always read ingredient list for sure.