Voting and Noshing for President 2020

There are regular vote polling places and then there is Downtown LA Staples Center, home of the world champion Lakers basketball team. 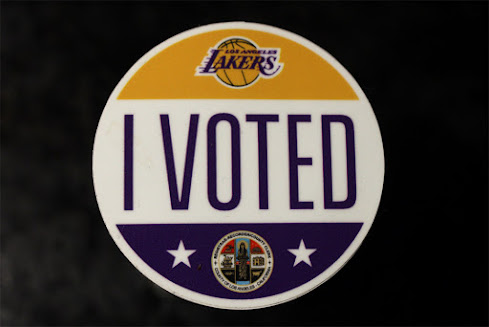 And check out below all the goodies you can pick up at Staples Center for just casting your vote here! 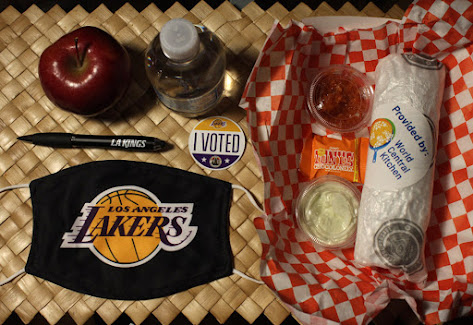 Linda and I went last Friday in the early afternoon. We found parking on neighboring streets near the main entrance. 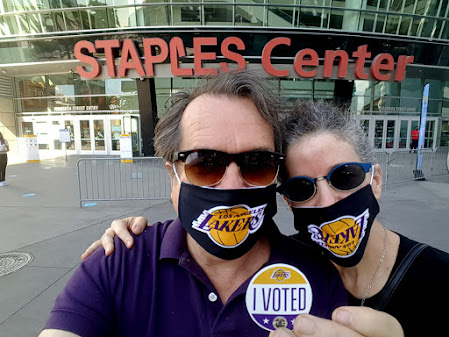 There may be stadium parking too, but we went the quickest and easiest route - we found parking meters for a dollar an hour. 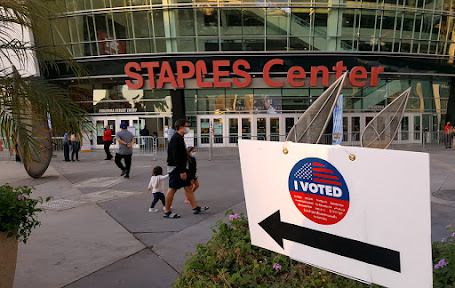 There was no line and it was so easy just to walk in and drop off your mail-in ballot. 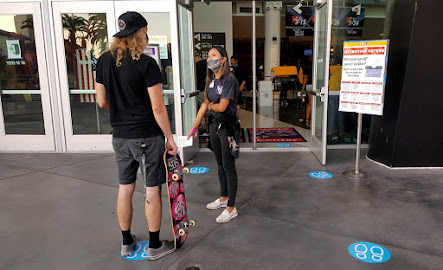 All poll workers wear a mask and are stationed throughout Staple's lobby to direct you to drop off boxes or polling stations to fill out a ballot right there. It is a large lobby and you have plenty of social distancing. 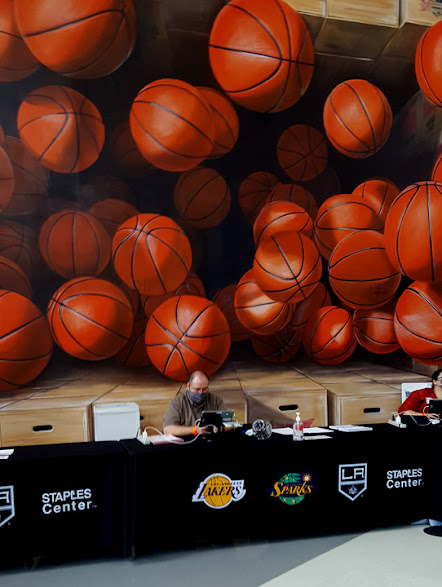 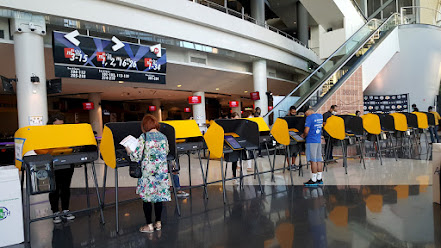 Since this is a sports arena you get stickers and a pen and that's not all - they are handing out LA Lakers face masks, too. Don't be shy, go ahead and grab 3 or 4 more for your fellow Lakers fan neighbors or family. 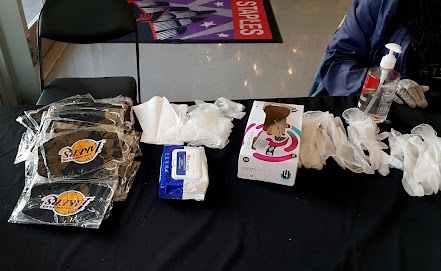 And feel free to use the hand sanitizer and disposable gloves before you use the touch-screen voting machines. 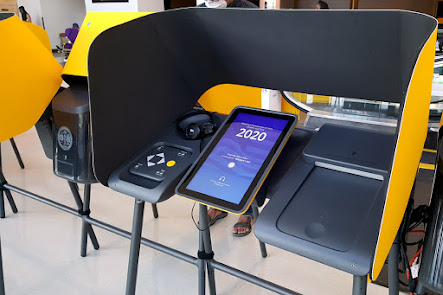 At the end of the polling area are a couple of photo-op backgrounds to use and share on your social media if you like. 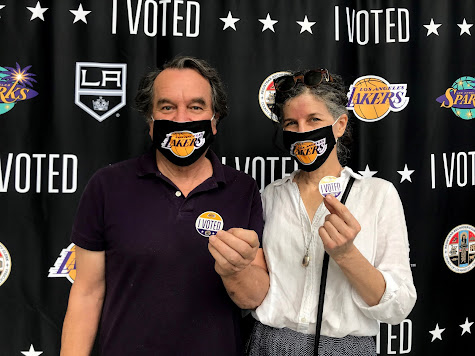 But the main draw, besides having your vote counted, was a kiosk right at the street light crossing button in front of Staple Center. Look for the Korean. American. BBQ. canopy covering a folding table. 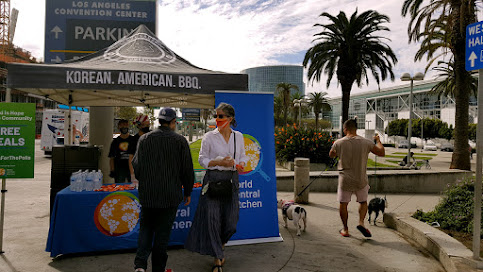 Right behind the table are food storage containers with foil-wrapped to-go burritos, sausage, and pulled pork sandwiches. At least that's what we've tried so far. 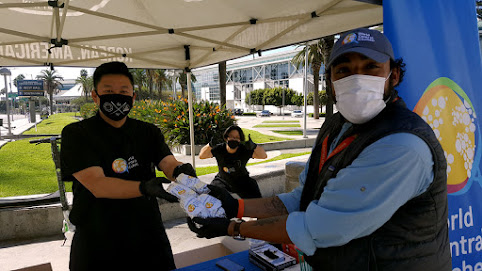 Hours usually go from about 10:30 or so until the food runs out sometimes by 4pm or a little later. I can't vouch for the hours exactly as I suspect the voting crowds will quickly surge from here on out. If you want to make sure to get a bite, the sweet spot is from 11am to about 2pm. 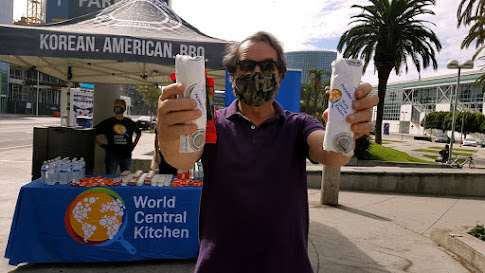 The food purveyors at the table the couple times we visited are from Seoul Sausage, a Korean BBQ inspired line of signature sausages, fried chicken, plus tasty side dishes sold around town in farmers markets, wineries, and pop up eateries. Click here for details including their latest ventures. 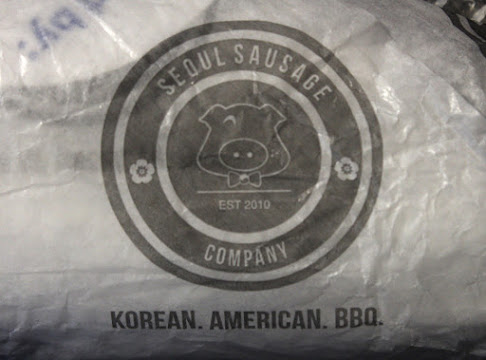 Believe me, their weiner dogs are the bomb! The sausage is sweet like Korean BBQ, course ground for extra bite, and large and juicy too. Korean BBQ meats are typically marinated in plenty of garlic, soy sauce, ginger, and sugar and honey (and more stuff) -- a killer marinade. Anyone who has enjoyed Southern BBQ will enjoy Korean BBQ. This day our sausages were pork.

These kiosk versions came with 2 sauces to slather on or dip with.

The red sauce is not ketchup or salsa, but a pickled sour grated veggie. While not as spicy as classic Kimchi, the chili and salty fish sauce flavors are still instantly addicting. 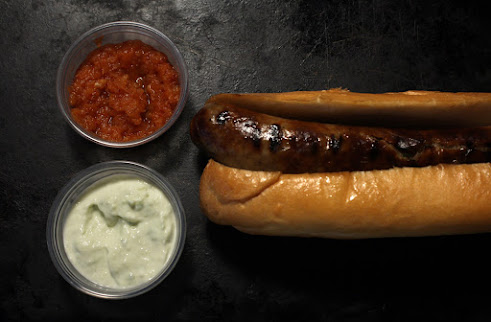 If that is too much for you then try the white garlic & sour cream sauce, with a whisper of horseradish heat. I like them both and chowed it all down...every drop and morsel. My taste buds were slam-dunked by Seoul Sausage! 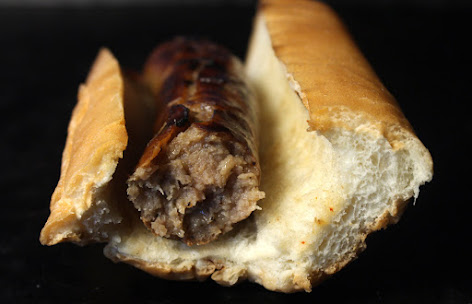 I would line up for these sweet sausage sandwiches anywhere or anytime. But beware as they go quickly at the Staple Center outdoor food kiosk. 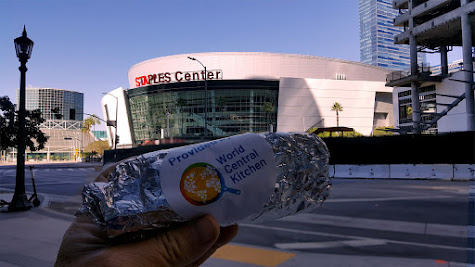 But don't worry because there is a rotating supply of other sandwiches and wraps in the food kiosk queue including a pork, black beans, and rice Burrito from Border Grill by the 2 Hot Tamales (LA chef mainstays of Latin and World Cuisines.) and a Pulled Pork BBQ Sandwich from Dulan's, one of the best soul food restaurants in South LA.

The pork, black bean, and white rice Burrito is fat and filling. There are a lot of chunks of pork that have the flavor of slow-roasting with banana leaves or green chilies - not sure which? The Burrito is loaded with white rice and black beans, lending a Cuban cuisine touch. 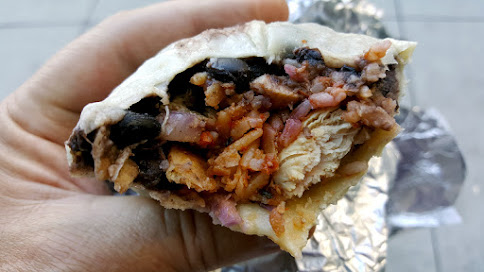 I also had a Pulled Pork (or chicken) Sandwich courtesy of Dulan's Soul Food. It's sloppy with sweet BBQ sauce on a brioche bun. And a couple pickle slices add a nice sour contrast to sweet ketchup-style BBQ sauce. 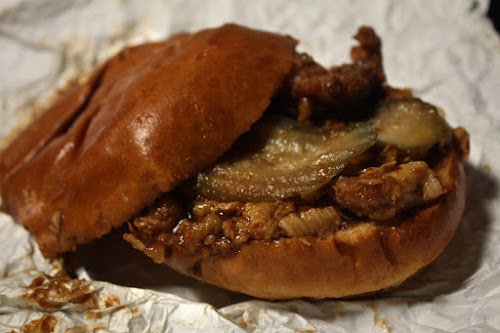 Since the meat is shredded and smokey it's hard to tell if ii's pork or chicken. Either way, the BBQ Sandwich is a knockout.

The sandwiches are grab-and-go so I was remiss gathering ingredient lists.

How did L.A get so lucky to have these talented cooks and chefs supplying voters with a tasty slap on the taste buds for taking the time to cast a ballot? 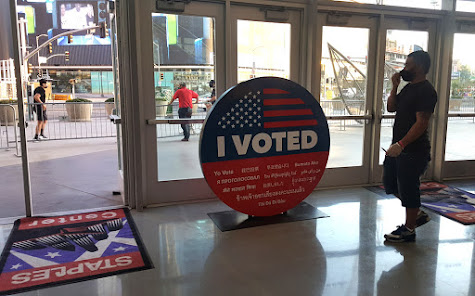 Be a good citizen and do vote, be it Democrat, Republican, Green Party, Libertarian, or whoever you choose. I'll leave you with my write-in candidate (nudge, nudge, wink, wink) I voted for !!