Deal of the Day - Savory Pork With Pecans & Green Beans 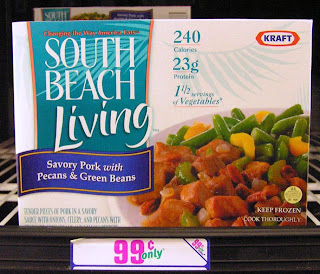 The Chef is one cheap bastard. He cringes when spending 5 -10 bucks for workday lunches. It really adds up after awhile; so part of his service to his fellow proletariat blog viewer is the Deal of the Day. Most of the 99c only Stores frozen dinners are quite bland, but the Chef has discovered a tasty one for you: South Beach Living's "Savory Pork with Pecans & Green Beans" by Kraft. 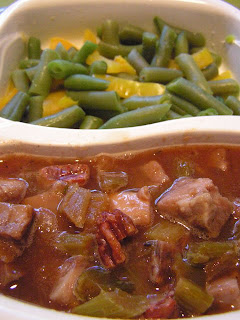 This is no typical Kraft box of mac n' cheese. The diced pork is in a brown gravy with celery and the pecan pieces give a nice crunch to typical soggy microwave fare; as for the veggie side, green beans are rescued with the addition of yellow bell pepper. Not a bad business day lunch for 99 cents. The serving amount is on the small side, so if you are used to all-you-can-eat buffets, this dish is not for you. 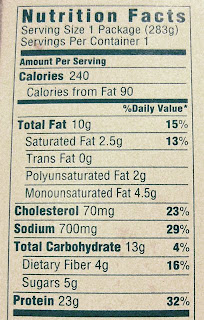 The Chef would recommend packing a slice of sourdough for the overabundance of pork gravy, but this would be breaking the South Beach Diet rules about carbs, wouldn't it? And you know how the Chef likes following the rules! So rating this dish on the Chef's new rating system,
9 cents being best, I give it 7.
Posted by 99 Cent Chef at 9:00 AM