Fresh Pasta - Deal Of The Day

Join the Chef tomorrow morning (Thursday Jan. 15th) for an appearance scheduled at 9:40 am on KTLA's Morning News Show (9-10 a.m. on Los Angeles's Channel 5) for a budget cooking segment on local TV.

Watch the Chef as he tries to cook and hold a conversation at the same time! For his local TV news debut, the Chef will try to squeeze in four recipes including: Ragu alla Mario Batali, Pita Pizzas, Eggplant Hummus and Mini-Banana Puddings (with the latest trendy dessert topping: a sprinkling of salt and bacon); all made with ingredients priced at a dollar or less. Tune in tomorrow to find out, will co-host Jessica Holmes taste the Chef's mini-banana pudding with bacon bits!?! 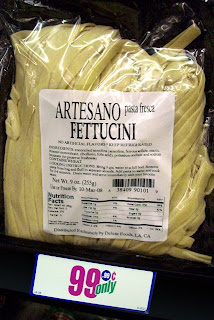 Fresh uncooked pasta has been carried in 99.99c only Stores for over five years now. Spaghetti, fettucini and linguini are sold in 9 oz. packs in the deli or frozen cold case.

While the Chef prefers dried pasta with all its varieties and al dente bite, fresh made pasta is a tasty change of pace; tender and also quicker to cook. Pair it with the Chef's "Artichoke Pesto", "Lighter Than Air Meatballs" or "Mario Batali's Ragu" recipes. 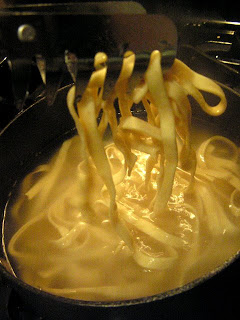 Fresh pasta needs no special treatment; just boil in salted water for about three minutes. When the pasta is pulled out of boiling water, try the following 99 Cent Chef delectable flavor enhancers -- drizzle with lemon juice and dust with freshly ground black pepper, or toss with a fistful of fresh shredded garden herbs and olive oil.

Marinated veggies from a jar, such as zucchini, eggplant, mushrooms or roasted red bell peppers make expeditious delectable vegetarian toppings. Keep a lookout for packages of fresh pasta and grab a few; it also freezes well.
Posted by 99 Cent Chef at 9:30 AM

This is so exciting (the Morning Show, I mean...although the pasta is exciting too, of course)! I can't wait to see the segment!

Congrats Billy! Hope you can podcast it.

love the pasta but missed the show. Did it go well?

The KTLA show was fun -- a little rushed, next time 2 dishes instead of 4, and will try to have an actual conversation!