For a potato substitute with a tropical Latin flavor try Yuca -- which I first tasted at Versailles, LA's premier Cuban restaurant.  Yuca is also called Cassava.

Yuca looks more like a sweet potato, with an outer waxy texture. They can grow quite large, twice the size of a Russet potato. 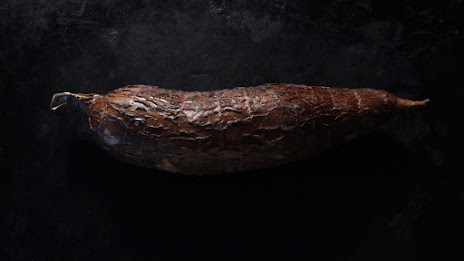 When boiled Yuca is similar to a russet potato. There is a stringy center that's easy to remove after cooking.

At my local Latin market, Yuca is often on sale for around 99 cents a pound. I've even found peeled and cooked Yuca in the frozen deli case at my neighborhood 99c only Store. 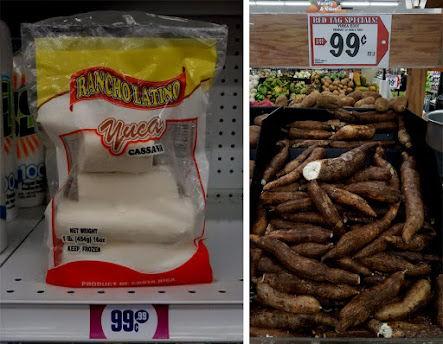 And the preparation couldn't be easier: Yuca is peeled and sliced, boiled for about 20 minutes, then drizzled with a Garlic Mojo Criollo Sauce comprised of olive oil, lime juice, garlic, and sliced onion. 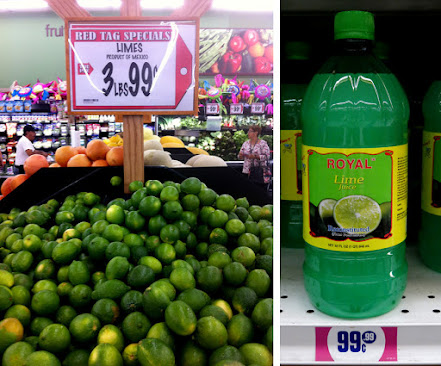 For Garlic Mojo Criollo Sauce you mix the above-mentioned ingredients and saute them for a few minutes. The tangy and pungent sauce goes well with boiled mild Yuca. 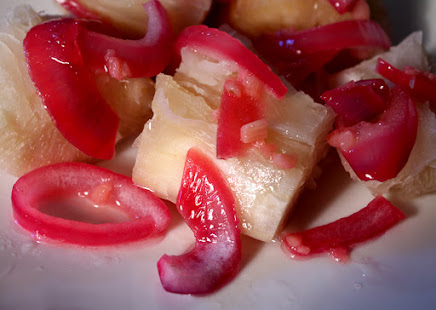 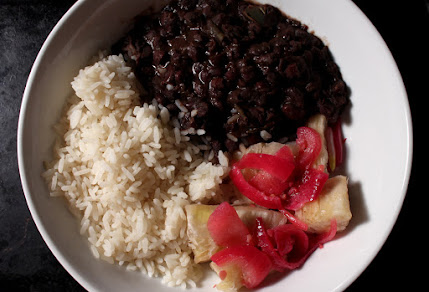 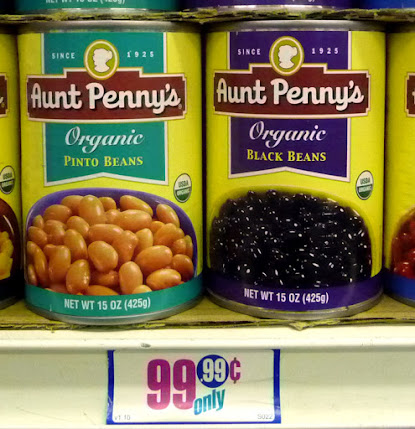 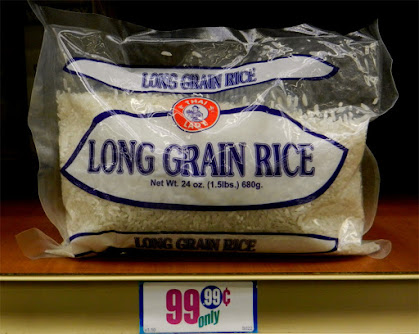 Start your meal with a Cuban Salad: thin-sliced onion with thick slices of avocado mixed with olive oil and lime juice. There you have it, a Cuban vegetarian meal.

Ingredients for Yuca (about 2 servings)

Peel and chop Yuca into large chunks. I use a potato peeler for removing the skin. Raw Yuca root is very tough like a sweet potato so be careful cutting through it. 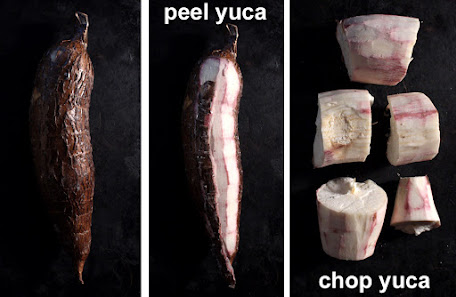 Place Yuca in a pot of boiling salted water until yuca is just covered. Reduce heat, cover, and low boil until tender, about 20-30 minutes.

When done Yuca should break apart easily like a boiled potato, but be careful not to overcook, as Yuca will turn to mush. Drain Yuca when done.

When cooked there are sometimes a few tough strings in the middle of Yuca, but they are easy to remove before serving. You can make Mojo Criollo Sauce as Yuca boils. 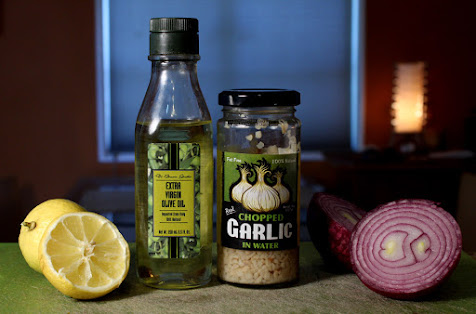 Finally, add chopped garlic and lemon juice to the pan with sauteed onion, heat until bubbling. You are just heating the garlic and onion for a minute. 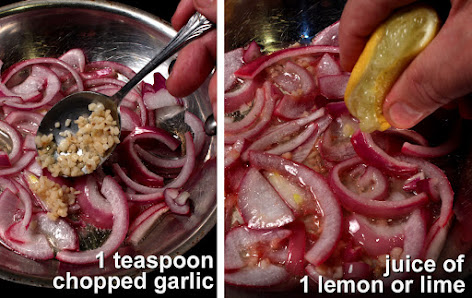 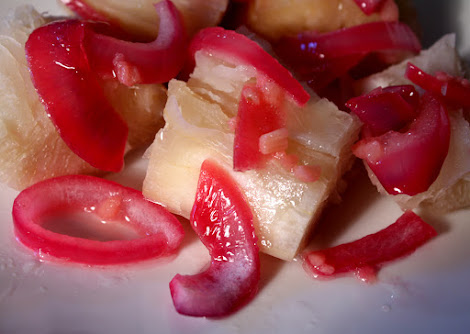 The most humble and cheapest of veggies is the tuber or potato. I can get them for way less than a dollar per pound. So there is every reason to celebrate National Potato Day. Be sure to click on any recipe name to see the tasty original blogpost recipe. 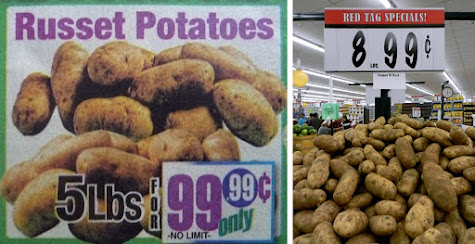 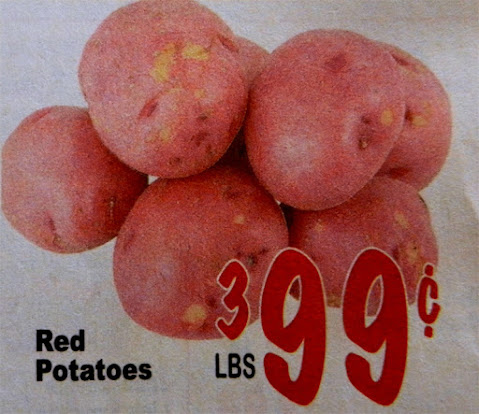 I'll start my potato recipe roundup with the most soul-satisfying Mashed Potatoes. I make mine the easy way with just boiled potatoes, milk, butter, a lot of black pepper, and a touch of salt. I always serve them with my Thanksgiving Turkey.

Here's my video below (Click on the recipe name above to see my photos and recipe text.)

Carrying on the Mashed Potato theme, my next recipe is from across the pond (Great Britain,) Shepherd's Pie. Potatoes are at their best when playing second fiddle to the main ingredient, often it's meat.

It's a hearty one-pot meal that has it all. Ground meat, green peas, carrot, onions in a bath of au jus gravy, and topped with mashed potatoes...it's so good. Once assembled, you finish the Shepherd's Pie off in the oven to get a browned topping. The prep work is straightforward, just some veggie chopping and pre-cooking the meat, veggies, and mashing potatoes. See how I do it below.

You can't get more red, white, and blue than a picnic-style chilled Potato Salad. I still make it quite often, too. My version is a Classic Potato Salad.

Again, the ingredients are cheap, simple, and easy to get. I like the added crunch of fine-chopped raw onion and chunks of celery. I make mine extra decadent with the addition of chopped boiled eggs. 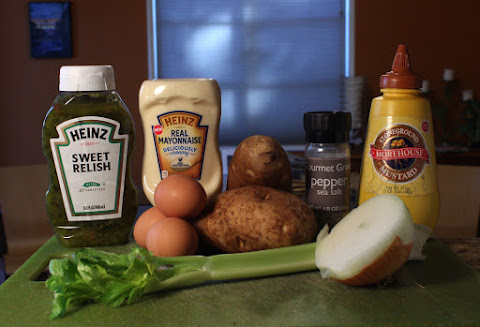 For your next picnic or backyard BBQ make a cool batch of my Classic Potato Salad.

This is one of my most controversial recipes and it's called Mom's Cajun Potato Salad. Mom came to visit me in Los Angeles and I got her to make it. My Mom lives in Louisiana and she knows her Cajun cooking. 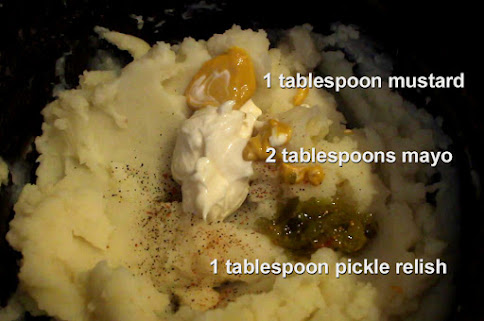 When I saw what she was doing I had to point out to her that she was making Mashed Potatoes, not Potato Salad!

Well, we had it out and she won of course, I should have know better butting heads with her. I'll let you make the call if it's mashed or salad-style after watching the recipe video below.

Originating in Central and South America, the potato comes in many varieties and colors. I like red potatoes but orange sweet potatoes are especially delish. Lately I've been grilling them more than typically baking in the oven.

You can grill them just like you would a regular Russet potato. They soften and char quickly and easily. So next time you're at the grill throw on sliced sweet potato and make Grilled Russet and Sweet Potatoes.

My Cajun nephew Zak works as a cook and learned a great Sweet Potato Hash to go with his classic Blackened Fish recipe. It's a 2'fer you can check out below.

You'll find these Breakfast Potatoes at truck stops and diners just off the interstate almost everywhere. This potato recipe sautes chunky potatoes, with a veggie mix of bell pepper, onion and garlic. They're also called Skillet Potatoes and Home Fries.  Make a big batch, they reheat fine the next day, too. 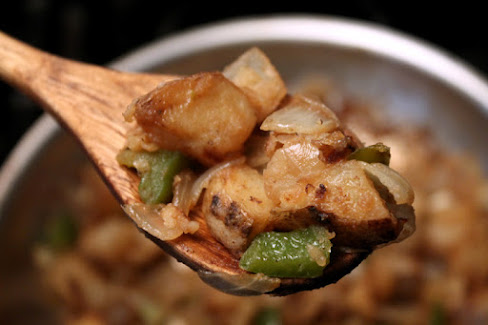 I like spuds fried, boiled and grilled, morning, noon and night. For breakfast, I'll grate a potato to make Old School Hash Browns. 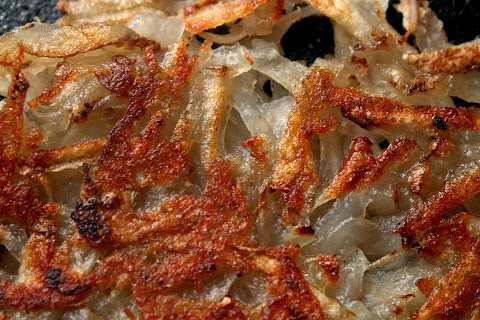 You may think I'm scraping the bottom of the barrel for this Cheap$kate Deal of the Day review of canned Corned Beef Hash. 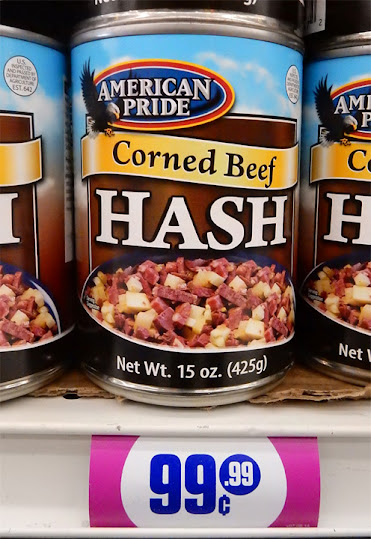 I can't argue with you here, I guess you get what you pay for. But, you know, this canned potato and meat breakfast side is not too bad...really. You can read my review/taste test by clicking right here - reading is believing! 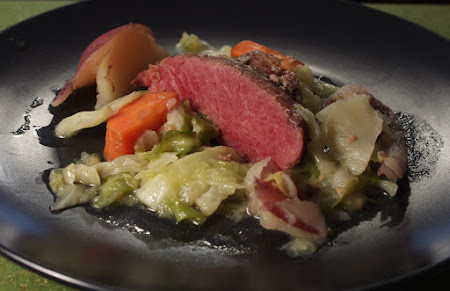 I make mine with cabbage, carrot and red potatoes. Normally expensive corned beef drops to half price or less during the holiday. I cook the corned beef first and finish up the dish by boiling the veggies in the broth until tender. 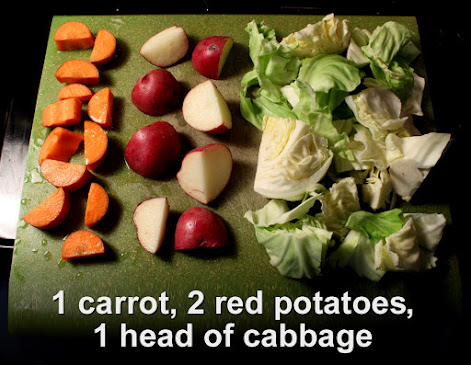 It's actually an very easy recipe to make, just watch it below to see for yourself.
Ribeye Steak and Red Potatoes may be my favorite oven-broiled combination. I usually start the potatoes first because I slice them thick.

After one side of the potatoes are browned I throw on the Ribeye. When it's cold outside the oven does double duty by warming up the kitchen, too!

A most unusual tuber is a Yuca. It looks foreboding, but when boiled it is super tender and very mild in flavor. I first had them at L.A.'s premier Cuban Restaurant, Versailles served with white rice, black beans and roast pork.

I buy Yuca from local Latin groceries and even at 99c Only Stores in the frozen deli cases all peeled and ready to reheat. 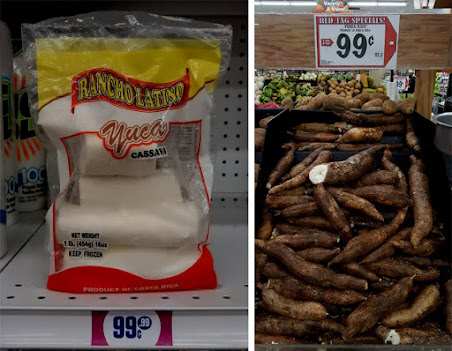 I have a most delicious and tangy recipe called Yuca and Mojo Sauce with Onion. 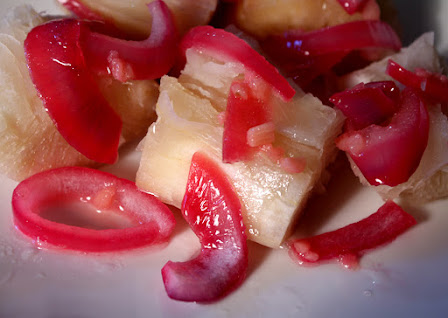 I had a neighborhood restaurant I would frequent on Sunday mornings for an expresso and a Spanish Omelet to go with my Sunday L.A. Times newspaper. 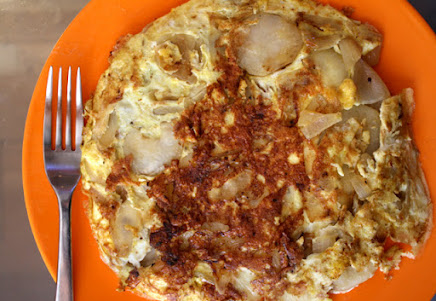 A Spanish Omelet simply scrambled eggs with sliced potatoes. You should saute the potatoes first as the eggs only take a couple of minutes to cook. 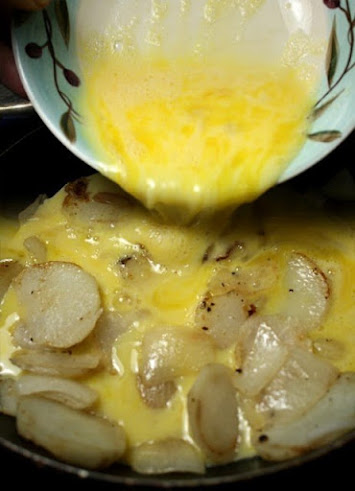 I have a great Fritatta to start your day. Again it has sliced potato, but with a Latin pepper called a pasilla or poblano. But don't worry as they are not spicy. They are more like a sweet red or yellow bell pepper. 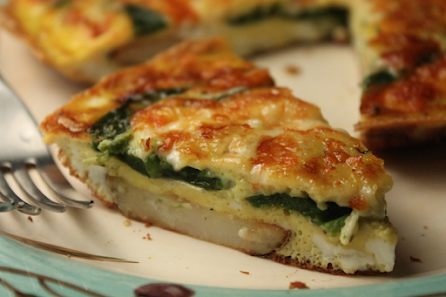 It's basically an omelet as well, that's finished with a layer of cheese and baked in the oven under the broiler to get a nice cheese-charred topping. 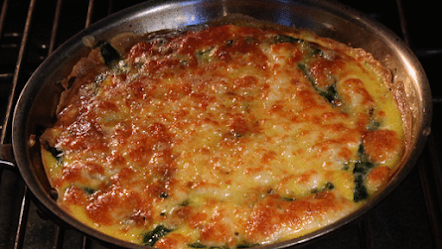 And let's not forget the French Fry, or Chips, as they call them in England.

The trick to a crispy Fry with a soft center is to fry them twice. Check out my video below of Fish and Chips and at the end of the video, I show you the frying technique.
I'm always coming up with recipes that include the common potato. So do check back for more eats that feature the most versatile spud.
Posted by 99 Cent Chef at 1:24 AM 1 comment: