The Chef has often taken home boxed meals and frozen pizza only to be disappointed. Most prepared meals seem to be missing something. The Chef's new series "Value Added," addresses this problem by simply adding one or two extra 99 cent ingredients to wack a dull dish out of the ballpark. 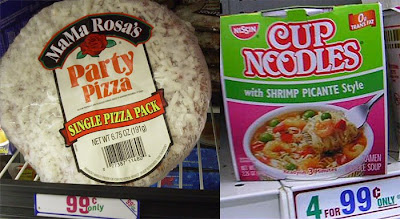 Transform a boringly bland cheese pizza with a topping of marinated artichoke hearts, or jazz up a box of dehydrated Au Gratin Potatoes with fresh sauteed sweet onion. How about a British twist on the French classic Cassoulet - pork and beans with 99 cent sausage, otherwise known as Beenie Weenies! Even the dorm room staple, dried ramen noodles, can be amped up with fresh spinach leaves, a sliced boiled egg and 99 cent canned sliced shitake mushrooms. 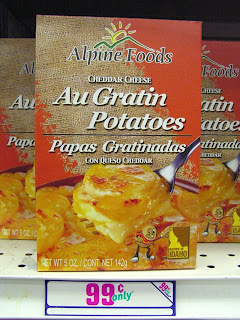 Get ready as the Chef pitches you his 99 cent boxed "Scalloped Potatoes with Sauteed Onion" Value Added recipe. By sliding in caramelized sweet onion, turn this strike-out of a dehydrated dish into a home run! -- OK, maybe a bunt. 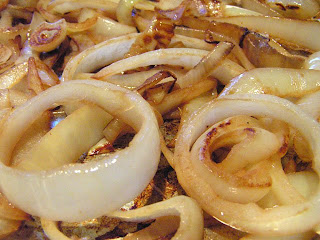 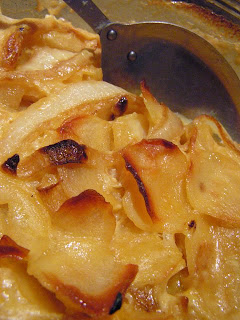 Directions
Saute onions in tablespoon of oil until tender and caramelized to a light brown, about 10 minutes. Prepare Au Gratin Potatoes per box directions and mix in sauteed onions -- the Chef prefers following the "oven" cooking directions to get a nice brown topping to the dish.
Posted by 99 Cent Chef at 12:41 AM

I love your blog!! Keep up the great work!

I wish we had a 99cent store in our city!

Dear Chef,
I just recently found your blog...that Valentine's Day photo montage was the best! I too, have been a fan of 99 only since I first moved to Vegas 5 years ago. My husband directed my attention to a gorgeous white blouse with pearl buttons and gold stitching on the cuffs and collar. Now whenever I wear it to work and receive numerous compliments...I smile to myself as I recall trying it on in the dairy section of 99 only! LOL!

Fresh & Easy just moved into our neighborhood. Kind of like a more simpler Trader Joe's. If you spend $20, they give you a coupon( via mail or in-store at checkout) for $5 off your order. I shop later in the day for food with reduced price tags at end of day sale..I just put a lot of items in the freezer to eat later so they don't spoil. Basically, I usually try to get $38 for only $15!