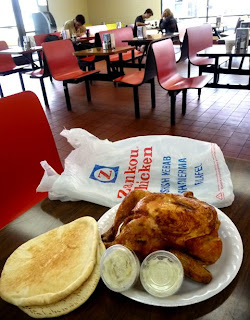 Sorry ladies, but The 99 Cent Chef is one cheap date -- just ask his wife! A favorite thrifty accompaniment to a beautiful sunset over the Hollywood Bowl is tender and succulent roasted bird from local legendary Lebanese poultry purveyor, Zankou Chicken. It's just shy of $10 dollars for a whole chicken -- that includes two pitas and two addictive and decadent garlic dips. I don't know the exact ingredients, but their garlic spread is so "crack" good you'll want to order a couple of extras (recipe here). 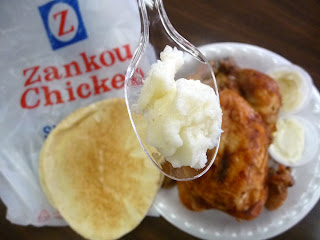 Make sure to ask to have the chicken cut for easier eating. Usually I get a couple extra pitas for 25 cents each. Bring some sliced tomato, onion and avocado and you can assemble your own delicious roast chicken pitas (a large plastic container for the chicken keeps things less messy when dining on Hollywood Bowl benches).

While satellite restaurants (really, just mini-mall formica settings) are popping up all over town, The Chef makes it a point to hit the Hollywood location, on Sunset and Normandie, a couple of times each summer during jaunts to Hollywood's musical mecca. 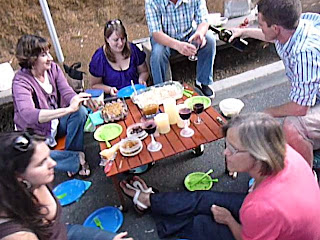 This bargain night out is the best summer deal in town. And you can bring your own picnic (some lease event nights exempted); just notice all the various spreads on the walk to your cheap seats -- everything from crusty baguette sandwiches from Patina and salads from Whole Foods to bottles of Trader Joe's "Two Buck Chuck" Chardonnay. Were else can you wine and dine enveloped in beautiful sunsets, listening to a full orchestra playing to a star-studded Broadway-quality performance of "Guys and Dolls" for 10 bucks! What a relief not having to budget in $9 watery draft beer or $8 soggy-bun hot dogs. 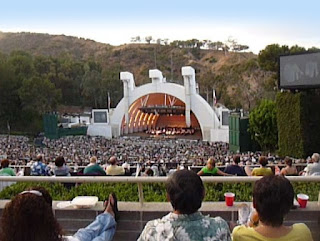 As for the "V,W, Z" cheap seats, yeah, it's a long way off, and your ears may "pop" on the way up. There are large projection screens, but I go to listen to the music, not to watch the show! The Hollywood Bowl acoustics are excellent anywhere you plant yourself.

Now parking is not cheap, upwards of $15-$30 bucks for "stacked parking", but you can take a "park & ride" bus or park at Hollywood/Highland and take a shuttle for a few bucks. 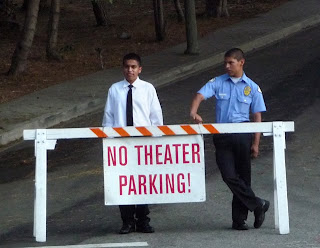 The Hollywood Bowl's website gives you excellent parking tips. The Chef used to live in off Franklin Ave. in Hollywood, so he knows a few side streets that are not restricted for free parking -- although it can be a long trek when loaded down with ice-packed chilled bottles of wine and other provisions.

During these mild warm nights, August is the best month for a Hollywood Bowl picnic. So come along for a date with The 99 Cent Chef. His new video shepherds you down L.A. thoroughfares into Hollywood's Zankou Chicken Restaurant, then speeds through Hollywood backstreets for a quick scenic walk into The Hollywood Bowl. You will feel like you are there, and you should be! You have a couple of months left to enjoy this festive L.A. summer destination that comes highly recommended by The 99 Cent Chef.


It's all about the music at The Hollywood Bowl as my video featurette below will attest. It would be 2 hours long if I put in a 15 second clip of every concert I've enjoyed there. Everyone from New Waver's ABC (favorite lyric: "I've seen the future, I can't afford it") to Rufus Wainwright drag-channeling Judy Garland singing "Come on Get Happy" (nice gams Rufus)! The programmers for The Bowl come up with great theme nights all summer long, like the recent movie showing of Koyaanisqatsi with a soundtrack performed live by the Philip Glass Ensemble with the L.A. Philharmonic. So check out The Chef's own video musical medley featuring half a dozen 15-second favorites!


Do you have some favorite Hollywood Bowl picnic cuisine ideas to share, or a favorite show you attended? Do leave a comment.

I think you can be forgiven for being a cheap date so long as you feed your wife well and have a great time doing it.

can you crack the code to that garlic dip recipe? They actually sell it at Ranch market but it's expensive

I adore Zankou chicken! My college roomie and I used to make many late night runs down Colorado Blvd for it. Unfortunately there are no Armenians in TN, so no delicious food like Zankou...

Great montage! Makes me realize I should go more often!