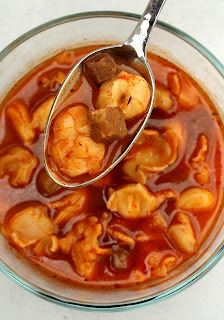 Pozole, like Menudo, is a rich chile flavored soup to soothe the system, taken the morning after indulging with too much cerveza or tequila. It's typically a stew made with cheaper cuts of pork -- like feet, ears, neck bones, etc. And it's a pre-Columbian recipe served during ancient Aztec temple ceremonies (thought to sometimes contain human sacrificed remains - thus, now made with similar-tasting pork).

But had the official chef during an Aztec ceremony served the canned soup featured in this Deal of the Day the high priest might have ripped the cook's heart out and added it to the stew! Still, with the tweaks I suggest to Progresso below, this convenient version can make a decent meal.

I'll confess, I tend to prefer Progresso's canned Italian tomato sauce -- I'm not so sure that their new Mexican soup line is off to a good start. 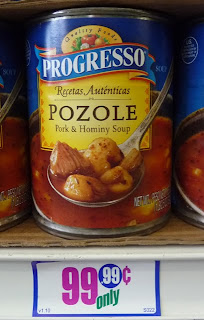 First, looking at the label on the can, you get the impression the soup contains large chunks of tender pork. But the pieces I found were smaller than the hominy shown on the label - about a third of the size, really, just pencil eraser size, and almost as chewy. Larger and longer stewed pork chunks would have saved this canned soup. The hominy needed longer cooking as well, as it was too crumbly and not tender enough.

However, the soup base is the best part. Progresso is on firm footing here. The tomato and chile have a subtle, spicy kick and a fragrant flavor of Mexican oregano and paprika herbs.

Email ThisBlogThis!Share to TwitterShare to FacebookShare to Pinterest
Labels: deal of the day, mexican, pozole, Progresso

I gasped when I saw it was canned pozole. Pozole is so cheap and easy to make from scratch.

Pozole is the bomb... Growing up in Mexico, I remember when we would eat Pozole on the 16th of September (Independence Day for all you Yanks who love 'Cinco de Mayo')... We would also have all sorts of Mexican delicacies. Our whole neighborhood would get together for the "Viva Mexico!" shout... I think my Mom knows how to make it... If not, Luchi (took care of me as a wee child) should know... And I will most definitely share if I can get the recipe

Ive had Pozole from a local Mexican restaurant. They have two versions. One has an almost clear broth the other has a red broth. Both are delicious.

I didnt expect the Progresso version to be anything like the restaurant versions but I was even more disappointed than I expected.

Although the Progresso broth was different I had no objections. I thought their broth was tasty.

My objection was it is almost all broth. The few pieces of pork are so small you hardly notice them.

Unless I see a "New and Improved" version from Progresso my first can will be my last can.