Like an Ex-President George W. Bush Jr. billionaire's tax break, or a President Obama Wall Street half trillion dollar infusion from TARP, The 99 Cent Chef's Portabella Crab Rockefeller is a rich edible windfall; one that will make you feel like you're dining in a private jet heading to a convention on the Las Vegas Strip, paid for by a lobbyist from the turgid military-industrial complex. 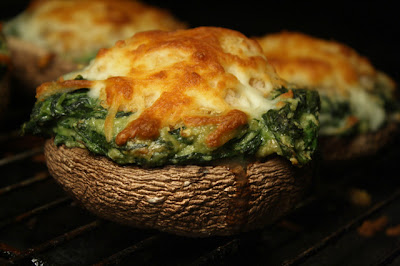 After enjoying this luscious entree, you'll eat another few meals with the dollars I've saved you; while you go back to perusing website job boards and praying for that unemployment extension bill to pass.

Or serve this at your next Tea Party gathering; your guests will be envious of all the green they'll see, and I don't mean Benjamins -- but chopped spinach, blended into a rich cream sauce with real crab, nestled into a meaty portabello mushroom and topped with melted mozzarella. And it's all made with dollar store ingredients! 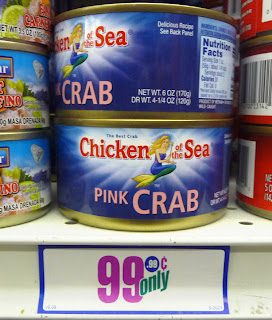 This newly minted dish is named after a high priced, members only, country club classic, Oysters Rockefeller - in which fresh baked oysters are topped with a creamy spinach sauce. I haven't seen oysters at dollar stores yet (except as canned pieces), but I often see canned crab, which makes a fine substitution.

This dish looks expensive, while easy to prepare - involving minimal chopping and some quick sauteing.

I've been picking up small packages of portabella mushrooms and canned crab at my local 99c only Store. Spinach and half & half cream comes cheap at most markets. 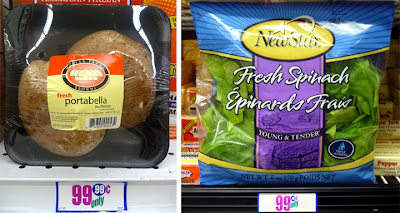 After dining on The 99 Cent Chef's Portabella Crab Rockefeller you'll feel like a million bucks, even in these cash-strapped times -- so open the humidor and light up that fat cigar you've been saving for the arrival of a new grandchild (never mind that your adult progeny is moving back in with it). 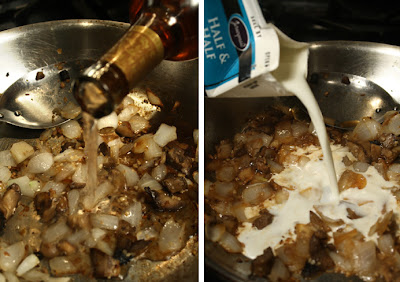 Directions
Roughly chop spinach - wash well, and cut off stems if it is a fresh bundle. Remove stems from portabella mushrooms and chop -- you can also take a spoon and gently scrape out, and discard, the feathery "gills" from the stem side for a more meaty portabella. 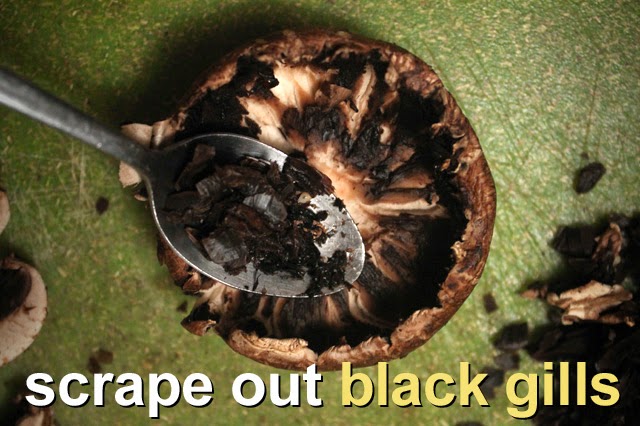 In a medium heated frying pan with oil, add chopped onion, garlic and stems. Saute until soft, about 3 minutes. Deglaze pan with white 99 cent wine. Pour in cream and mix well. Add chopped spinach and cook until soft, about 5 minutes. Finally, shake in grated parmesan and bread crumbs (or flour). The sauce will thicken when heated through another few minutes. 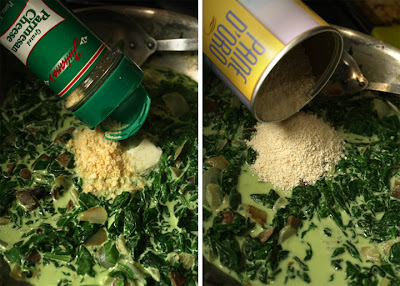 Preheat oven to 350 degrees. Drain can of crab. On a baking sheet or large pan with a grate, arrange mushrooms, cavity side up. Spoon in enough spinach and cream to fill the portobello mushroom. Stack on a couple of spoonfuls of crab. Finally top with plenty of mozzarella cheese (or your favorite). 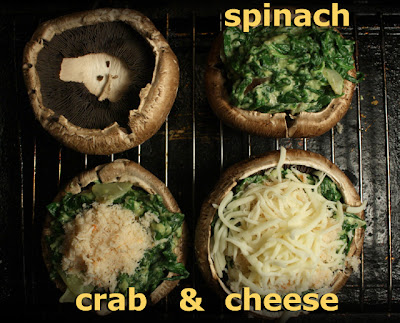 Hi Billy,
Tried this today and it is Very
Tasty! Love reading your stories
and like trying many of the recipes
you've come with. You have a
wonderful sense of humor! Best 2
you and your wife.

Thanks Wayne, just because one is light in the wallet, doesn't mean being miserly in wit!

Hi, I found your blog after watching Food(ography) after making this recipe from memory (I left a few things out), and wanted to tell you how yummy it is! I am on a special diet and could devour an entire mushroom, well I can't devour anymore, but I did take small bites. Thank you for this. You've got a great concept and great personality to match!