The Shutterbug Chef is bringing the neon-lit streets of Los Angeles to your computer screen in my latest exploration of nighttime nosheries with Restaurant Nocturnes XI. Again, I'm all over the place: from the South Bay to East L.A.., and Little Osaka (West L.A.) to the Kosher Corridor on Pico Boulevard. And at the end of this post I list all 13 restaurants I shot, along with their website link or a review.

Hop Louie is a dining time capsule built the 1940s and lodged in a movie-set designed pagoda. Located in Downtown-adjacent Chinatown, this hipster and tourist hangout keeps on keepin' on. I shot here on a Saturday night last month, as the bar jukebox on the first level was blasting Kool and the Gang's "Hollywood Swinging," while I watched a steady stream of denizens coming and going through the side door for a smoke, or plotting out their next night moves on cellphones. And the booze and chow are cheap here. Listen in on an audio clip I got of the waitress's menu picks for the upstairs dining room.

Right around the corner from one of my favorite movie houses, the Nuart, is a hot new Westside hangout serving neo-comfort food. Plan Check specializes in small plates and is located on Sawtelle Boulevard in Little Osaka. They pickle cucumbers and preserve their own Venison Salami and Duck Breast Ham, but are most notorious for Ketchup Leather -- which is simply dried strips of ketchup, kind of like a fruit roll-up, that is layered on their Wagu beef burgers. And their bar scene is happening. I was lucky enough to get chef/owner Ernesto Uchimura to give me the lowdown, which I recorded and am pleased to share with you 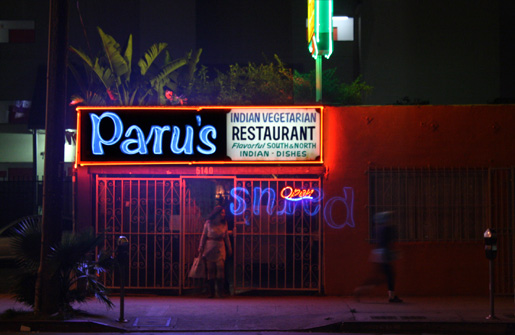 For vegan dining, Paru's Indian Restaurant has been a fixture on Sunset Boulevard in Hollywood since 1979. You have to press a buzzer to get past the imposing metal gate, but once inside you walk though a  pleasant courtyard and are greeted by the soothing soundtrack and fragrant aromas of India. I had a hard time pulling away after recording the waiter's scrumptious menu rundown, but I was on a nocturne tear, with more restaurants to shoot that night. 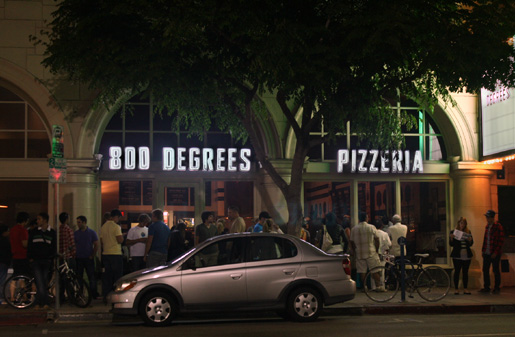 If you're looking for a boisterous atmosphere, hit 800 Degrees for pizza -- it's located in Westwood down the street from the UCLA campus. Don't worry if you encounter a long line of hungry students: the  fresh-fired Neopolitan pies are ready in just 60 seconds, due to the 800-degree ovens. Opened in January, this cafeteria-style pizza joint was created by the locally lauded Umami Burger Group. Prices start at $5.15 for a plain Pizza Marinara, and go up a dollar with each meat, cheese or veggie add-on. And the extra topping list is a long one, including Rosemary Ham, Rock Shrimp, Meatballs, Smoked Provolone, and Eggplant. Appetizers, salads and specialty pizza pies are also on the menu, and you can satiate your appetite until 2 a.m.

Come rub elbows with the 1%ers at Melisse in Santa Monica, a 2-star Michelin awarded eatery. You'll dine on a $150 per person Tasting Menu of 10 courses that includes: Egg Caviar, Japanese Yellowtail and and a Sweet Corn Agnolotti (pasta) with shaved Black Truffles. They also have a four-course Tasting Menu for $115. I'll allow the Maitre'd to give you the decadently delicious descriptions.

If your wallet is light tonight,  take the Gold Line Metro rail (my video blogpost here) for a 10-inch Huarache that only costs $4.23 -- it's made in Boyle Heights in East L.A. by the recently opened Antojitos Carmen. A Huarche's like a corn masa pizza  loaded with beans, lettuce, salsa, crema and your choice of squash blossom, corn fungus, mushroom, potato, asada, carnitas, or al pastor. Chef/owner Carmen Castellanos was a Breed Street cart vendor lauded by the likes of L.A. Times reviewer Jonathan Gold -- until the cops and food inspectors hassled her into this legitimate brick and mortar. Now you can enjoy her authentic Mexican fare night and day. 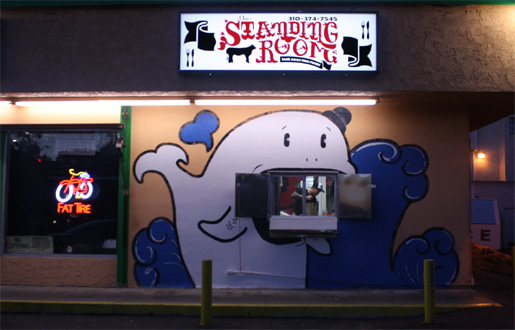 Tag along to Redondo Beach in the South Bay, where a literal hole-in-the-wall, The Standing Room, serves the Burger of the Year -- so says local paper the Daily Breeze. Opened a year and a half ago, Standing Room is located in the back of Catalina Liquor Store, where you belly up to a counter and order to go. (Outside are a couple of tables with umbrellas at one end of the parking lot.) Their 1/2 pound burgers are packed with savory flavors like: Caramelized Onions, Tomato Jam, Smoked Gouda Cheese, Habanero Cream Cole Slaw, and...well, I'll just let the chef describe the Dressed Burger to you in my video clip. 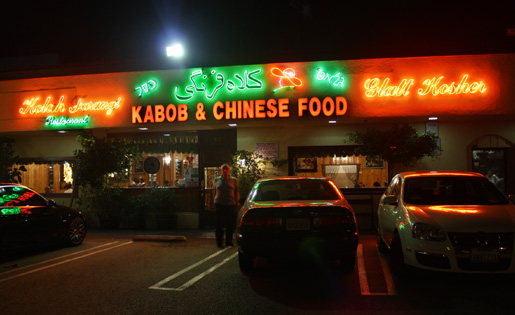 And I finish up with a tongue-lashing from the proprietor of Kolah Farangi. Located along the Jewish corridor on Pico Boulevard, this kosher Middle Eastern and Chinese eatery is one place you don't want to stop to take a picture of their cool neon facade. I could tell I was in for an earful just watching the owner pace and give me the evil eye at the doorway while I was snapping away.

I always like to end a Restaurant Nocturne video with a bang, and man is this the Big Bang. Just listen in as I try to convince the owner to let me shoot a few more frames from the parking lot. Will this Hardheaded Chef finally get his just desserts and end up in the slammer for trespassing?  Or can the Silver-Tongued Cuisiner talk his way out of another jam?  You'll have to watch the end of my Restaurant Nocturnes XI video below to hear the surprisingly dramatic finale!