The Alley Cat Chef has picked the lock of his kitchen cage with a car key and is cruising Los Angeles streets again -- for Restaurant Nocturnes XII. This Chef does not live for recipes alone, and when the moonlit street beckons, I set aside my whisk and pick up a camera.

My newest video compilation lets you in on the menu specials and nightly comings and goings at a tasty dozen restaurants, from  the Brite Spot in Echo Park, to the 1950s Googie architecture treasure Pann's, to the neo-Latin cuisine at innovator John Sedar's Playa in West Hollywood, to the beloved but endangered Henry's, a classic old school Mex/American taco joint in the Valley.

It's a fascinating tour of LA's dining scene after dark, shot with a digital still camera and turned into a time-lapse video clip suitable for framing, and after the video, the Considerate Chef gives you links to read all about the featured restaurants.

Looking to hang with hipsters on Harleys? Check out the recently refurbished Brite Spot coffee shop on Sunset Boulevard in Echo Park. I liked it when it was cheap, with coffee-stained carpets. Now there are Brussels sprouts in the breakfast potato hash, and eggs scrambles go for 10+ bucks. But the food is good, and if you've just spilled out of the nearby  Echoplex alt.music club at 2 a.m., the revamped Brite Spot is a much more appealing place to to take a date to rather than a taco truck down the street. 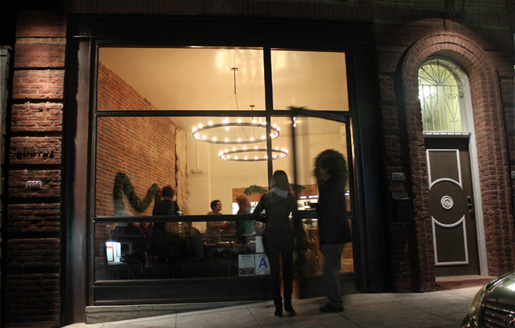 Heading west toward Silverlake, you'll find the new Cortez restaurant just off Sunset at Allison Boulevard. Opened in October by Marta Teegan and Robert Stelzner, the owners of Cookbook, Echo Park's sustainable market , Cortez serves seasonal farmer's market-sourced cuisine. (Click here to read a recent review in L.A. Weekly.)  I dropped by on a weeknight at 6:30 p.m. to find three diners at the two communal tables, but customers began to arrive as I was shooting -- and by the time I folded up my tripod, half an hour later, the place was packed. Listen in as the honey-voiced hostess gives the Frugal Fotog a rundown of the enticing entrees, and you'll know why it's become a local favorite. 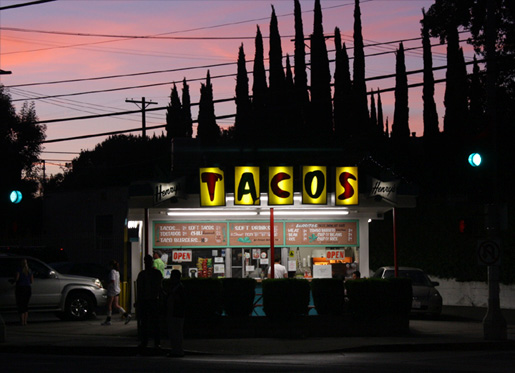 Another notable Nocturne is the L.A. classic Henry's Tacos, a Mex/American fast food joint on Moorpark Street in the Valley.  It may be over for them -- after 51 years, a landlord dispute led to this month's final closing announcement. But supporters have rallied for a brief stay of execution. Will Henry's survive -- maybe a new location down the street? The suspense is killing me, like their lauded and loaded Taco Burger!

The Googie-style coffee shop Pann's, on La Tijera Boulevard in South L.A, , with its glass walls and Space Age arrow roof, has been flipping pancakes for locals and architecture fanatics since 1958. It was recently named as one of the "10 Best Fried Chicken in Los Angeles" by the L.A. Weekly, and the food is as good as it ever was.

The San Francisco transplant Cafe Gratitude fits right in with the diet- and health-conscious crowd in thespian-centric Hollywood. The menu items at its Larchmont Boulevard location are all affirmations, as in: I AM DAZZLING, a Caesar Salad with romaine lettuce, avocado, Brazil nut parmesan and capers tossed with Caesar dressing; or I AM LIBERATED, a creamy hemp seed pesto pasta with kelp noodles, heirloom cherry tomatoes, green and Kalamata olives and  spinach topped with Brazil nut parmesan and fresh basil. Whew, I feel way better already, and all I did was photograph the place.

I finish up this 12th edition of Restaurant Nocturnes with the soothing wash of ocean waves at  Tony's, a classic  joint that has served seafood grilled, steamed or fried since the 1950s. Sure, it's located on the tourist-crowded Redondo Beach Pier, but it's not outrageously expensive, just in the $20 - $25 range for dinner, and you couldn't have a better seat to watch the sun go down while dining. For a cheaper time, belly up to the bar for nightly live music and a Happy Hour cocktail with an appetizer or one of  Tony's "Basket Items." I'll let the waitress fill you in on some tasty sounding aquatic entrees.

So, click on the play button below to take in the neon-lit eateries of Los Angeles with the Cruising Cuisiner as your guide. Best of all, you won't have to spend a cent for gas money.

Excellent tips & method about recipes, you have a wide range of indian recipes list available, helpful site - thanks
Indian Racipes

Hey bud this is random, so I own Old Tonys in the pic above. Thanks for the good review. Question; your moving pic of Old Tonys , can that be used as a cover photo for facebook ? Text me 310 283 9603 or respond here.
Thanks

I just used my "ninja" app and stole it from this page. Haha. Here's what I did with it.

Shi*, can't paste a "link. " it's on my youtube page . It's the 2nd video down called "thank you chstomers" Thanks bud.