The Midnight Nosher is back with another nighttime roundup of Los Angeles eateries. Some old some new, some hip some old school. This is my thirteenth Restaurant Nocturne compilation video. And on the way to the video at the end of this post I'll point out, with photos and animated gifs, a few highlights to you.

It's been a banner year for new restaurants in Los Angeles. I feature a couple of notables where the young chefs who run them are still in their mid-twenties, and are lauded among the best chefs in America.

Alma in downtown Los Angeles just awarded Bon Appetit's "Best New Restaurant in America." Located between a Latino taxi dancing club and a marijuana dispensary, the look of Alma's facade is low key. (Just hanging out front shooting my photos I got an eyeful watching women in impossibly tight attire and high heels tap tap by cowboy hat wearing gents taking cigarette breaks outside the club next door.) The Chef co-owner, 27 year old Ari Taymor, earned his whites working in San Francisco restaurants then moving here becoming a pop-up chef -- taking over established restaurants during off hours or slow nights in Venice and Silverlake. Listen to the maitre d' give a delicious menu description that I recorded earlier this year. 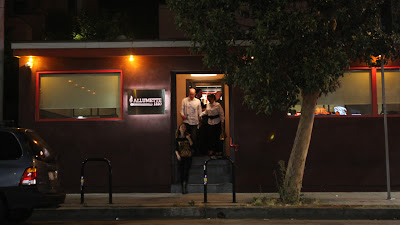 East of downtown in the Echo Park neighborhood, at recently opened Allumette (French for "matchstick cut",) it's not too difficult to get a reservation... for now. Maybe it's because of the Echo Park location that they're not booked up months in advance, although they are hipster-adjacent to Silverlake. 25 year old Chef Miles Thompson (former sous-chef for dining hotspot Son of a Gun) gets creative sourcing local, organic and sustainable ingredients. For Allumette's video segment, cocktail creator Serena Herrick guides you through a menu of highlights with a voice as smooth as George Dickel Tennessee Whiskey.

Night + Market, at the West end of the Sunset Strip, is the best deal on that end of the Boulevard. While the Thai food by Chef Kris Yenbamroong is just "the kind of stuff he would eat after school with his buddies, when he was living in Bangkok," it's food reimagined with creativity and elevated ingredients, but not elevated in price -- appetizers start at $6 and most main entrees are from $10-$14 (with some "market priced" seafood.) Finally a cheap enough hipster eatery where even the Tightwad Cinematographer can set down his camera and tripod.

But for the cheapest deal in my Restaurant Nocturnes XIII video look no further than Top Round Roast Beef. The neo-fast food joint looks like it stepped out of a 1950's magazine advertisement. This middle American-style sparking new diner was hatched by a clutch of LA Chefs. The menu is just roast beef sandwiches and fries, plus desserts of frozen custard, shakes, floats and malts. The sandwiches are $4.95 to $6.45 a piece. For being a collaborative chef-centric menu, it's stripped down but well thought-out fast food fare. The roast beef is slow roasted for over 10 hours and some of the condiments are even made in-house. How about the Beef & Cheese sandwich with house made cheese "wizz" on an onion bun, and "Dirty" Fries with gravy, provel cheese, caramelized onions and round sauce? I'm one lucky photog because this joint is located on the corner of La Brea Avenue and Olympic Boulevard, just a couple of miles from my condo. 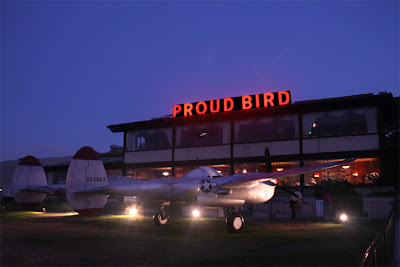 And I end with possibly the most unique restaurant in Los Angeles. Proud Bird is part museum and classic clubhouse restaurant, located just a few blocks from LAX on Aviation Boulevard. If you have a long layover at the airport (it's about a $5 taxi ride away) or are dropping off someone there, make it a point to drop by the Proud Bird sometime. 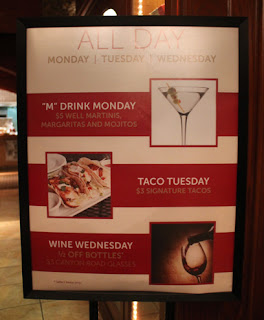 As you can see from the photo there are vintage airplanes on the grounds. I counted about a dozen. If you were an airplane model builder as a kid like I was, you could spend an hour walking around the grounds. They have everything from a WWI German Fokker to an American WWII Spitfire. And that's only the half of it. Once inside there are photo and memorabilia filled nooks and hallways dedicated to the barrier breaking WWII black Tuskegee Airmen, long distance flight aviatrix Amelia Earhart, and countless other air flight pioneers. Grab a happy hour drink special and a couple of signature tacos and roam the halls -- totally fascinating.

With 11 restaurants curated and photographed by The 99 Cent Chef, Restaurants Nocturnes XIII gives you a thumbnail inside and outside peek into the local bustling and varied food scene. Just hit the play button below and see for yourself, no reservation required.