This internet chef does not live by publishing recipes alone. Nighttime photography is also my thing. Give me a tripod, a digital still camera, four wheels and a quarter tank of gas, and I'm ready to hit the neon lit streets of Los Angeles. My Restaurant Nocturne Series is half art and half food blogging. As dust approaches, I usually have a handwritten list of about four or five restaurant destinations. On most outings I'm lucky to shoot two or three. That's the way it goes.

I go to a dining destination and it may have a bunch of cars blocking my view, or it's a slow night and nobody is eating out there. I gotta have some people entering or leaving the restaurant I am shooting, or there is no Restaurant Nocturne; I'll pack up and head to the next one on the list. Customers give scale and meaning to my nighttime photography; without them it's lifeless - that's the way I roll. 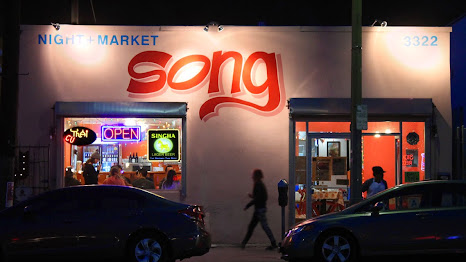 Rejected photo - will try again when there are less cars out front.

But it's all good. If I don't get it that night, I'll be back. Usually I can, at the very least, corral someone to recite the menu for my audio, either the maitre d' or, waiter or even a satisfied customer, and, sometimes if I'm lucky, the chef. And if nothing else, I know where to park next time, and I have the composition figured out, as with the photo of Night + Market Song above.

Sometimes it takes five minutes to shoot a Nocturne, sometimes I'm there for 45 minutes - all depends if and when people walk through the frame. I'm not a paparazzi (as I'm often mistaken to be) shooting celebrities out on the town.

Usually, I'm out front somewhere, on the sidewalk, or across the street with my tripod and camera. Sometimes the maitre d' will come out and shoo me away -- well, as long as I'm not on private property I can continue shooting the restaurant. Hey, I get it, I can see their point of view; customers are out to dine, not end up in someones photograph. That's the contradiction and controversy of street photography. I'm first and foremost an artist, so I have a bit of leeway - that's what I keep telling myself. (Although, when shooting in a mini-mall I am on private property, so I have to depend on the whims of security guards or parking attendants.) My final outcome is not to embarrass anyone or make the restaurant look bad. I'm just documenting Los Angeles's nocturnal dining scene, from street level.

Lately, I've been letting the appetizing audio have more time. I used to cram too many restaurant video clips into a typical Restaurant Nocturne, now I have fewer. But, I think it's important to let the menu audio breathe.

Fine dining in mini-malls, that's the way we roll in Los Angeles. For Restaurant Nocturnes XIV, most of the cafes I shot are located in grubby Los Angeles strip malls, from Hollywood to Koreatown, and Silverlake (except the last restaurant, Little Jewel.) I didn't plan it that way, it just happened. You'd be surprised at the quality of dining that's thriving in these nondescript tacky locales.

Why are ambitious and creative new restaurants popping up in mini-malls? Cheap rent, that's why.

A couple of the most hippest and written about eateries are next to a doughnut shop and dry cleaners, in the photo above. ABC's The Taste judge/mentor, Frenchman Ludo Lefebvre, opened two restaurants in the last year (along with partners, chefs Jon Shook and Vinny Dotolo of Animal,) at a Hollywood mini-mall near the corner of Highland and Melrose Avenues.

As a contrast, across the street and down half a block is the eating emporium, and decked-out Mozza, helmed by Nancy Silverton (named 2014 Outstanding Chef by the James Beard Foundation,) in partnership with Mario Batali and Joe Bastianich. 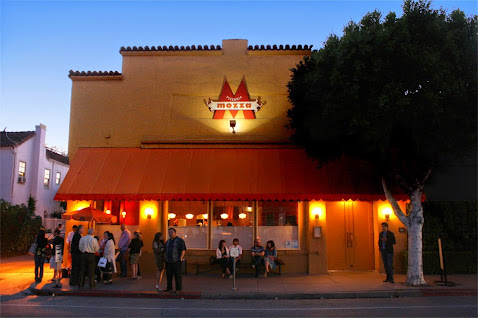 When you go to Ludo's Trois Mec down the street, just drive into the mini-mall with the donut shop -- and try finding it. There's no Trois Mec sign. The sign you are looking for is a pizza sign called  Raffallo's Pzza (sic) with a yellow "OPEN" arrow, that's your destination. Go figure. I think Ludo has a perverse sense of humor, and I like it! Controversially, he and his wife have instituted a prepaid, no-cancellation, reservation system, where you call 2 weeks ahead to get a seat. And you better call promptly when seats are released 8AM every other Friday morning, because they sell out in minutes.

Ludo's menu there is cutting edge, changes constantly, and makes Top Ten lists in all the local food media. Just listen in to the entree ingredients in my video - Eggplant Mole with Charred Onion, anyone?

Right next door to Trois Mec is Chef Ludo's version of a Paris Bistro, Petit Trois, that serves the perfect omelette with Boursin cheese sauteed in lots of butter, and Steak Frittes with a well-curated glass of wine. And recently Petit Trois is serving fois gras, since a federal judge struck down California's ban on the duck liver delicacy. The menu changes and it's not listed online, so you have to drop in to see what French cuisine is being served this month. (It's funny, but while I was gathering the menu audio there, people kept entering Petit Trois asking for the location of Trois Mec. The waiter had a ready quip to send them on their way next door.) And Petit Trois has a legible and legitimate sign...under the previous owners Tasty Thai sign. 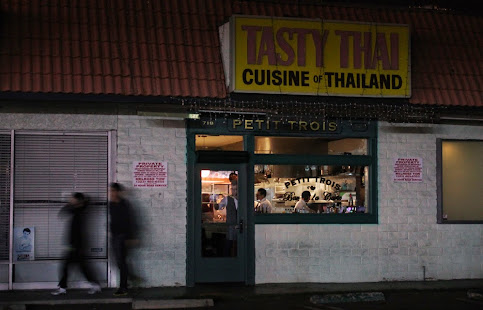 In Los Angeles's grooviest neighborhood of Silverlake is another mini-mall dining destination, Pho Cafe. Like Trois Mec there's no sign, just the deteriorating street address stenciled on it's window facade. But you know somethings going on here when the dining tables are full of fragrant steaming bowls, along with a chatty sidewalk queue out front.

Pho Cafe
Pho (pronounced like fuh, or duh with an f) is a watery, but, deeply flavored beef broth with silky noodles topped with fresh herbs. There is a selection of meat to add, like: chicken, thin sliced beef, tendon and meatballs. The Pho Cafe is a bustling neighborhood hangout specializing in this Vietnamese specialty.

Next up is Saint Martha, named after the Patron Saint of cooks and servants. The restaurant actually has a sign! It's located in Koreatown on Western Avenue, in a two story strip mall, along with all types of Korean businesses and Oriental eateries.

The exterior may be 1960's blasé architecture, but the food at Saint Martha is Modern American cooking by Chef Nick Erven. Ingredients change with the seasons, so expect the unexpected. Saint Martha has been open only a few months, but it's already on many Top Ten Lists. And make sure to listen for the tasty sounding entrees in my video below.

You want cheap, well I got it here at Al Wazir Chicken. I love Middle Eastern rotisserie chicken. And at this no-nonsense eatery with formica decor, you get a whole chicken with pungent garlic sauce and pita bread for about $10. Now, my go-to rotisserie chicken is from Zankou Chicken, an LA dining institution down the street on Sunset Boulevard, but as a backup, this is a fine substitution. 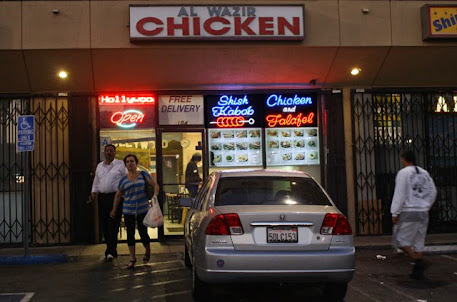 It's in my old neighborhood of Little Armenia on Hollywood Boulevard and Gower Street, and, of course, it's in a mini-mall (where I used to get my prescriptions filled in an upstairs Farmacy - since closed.) Loaded Shawerma Pita Sandwiches of marinated slow cooked chicken, beef and lamb, go for $4-$6. And there are Middle Eastern vegetarian sides of Hummas, Stuffed Grape Leaves, Baba Ghannouj and Tabouleh.

Anytime a Cajun eatery opens I'm there. And Little Jewel is my type of dining joint. The final Restaurant Nocturne is not located in a mini-mall, but is in Chinatown?!! Well, that's no big deal, located right down the street is the originator of the French Dip sandwich, Philippe the Original.

I went to high school in Louisiana so I am well versed in small, neighborhood markets and gas stations with a sandwich deli in the back. This is the real thing and Chef Marcus Christiana-Beniger stocks the market with all manner of hot sauce and Creole seasoning, pickled veggies, Zapp's Potato Chips, Camellia Beans, Community and Cafe du Monde Coffees, and even packages of ramen for the locals. He know his stuff, as he was born, raised and worked in restaurants all around New Orleans. 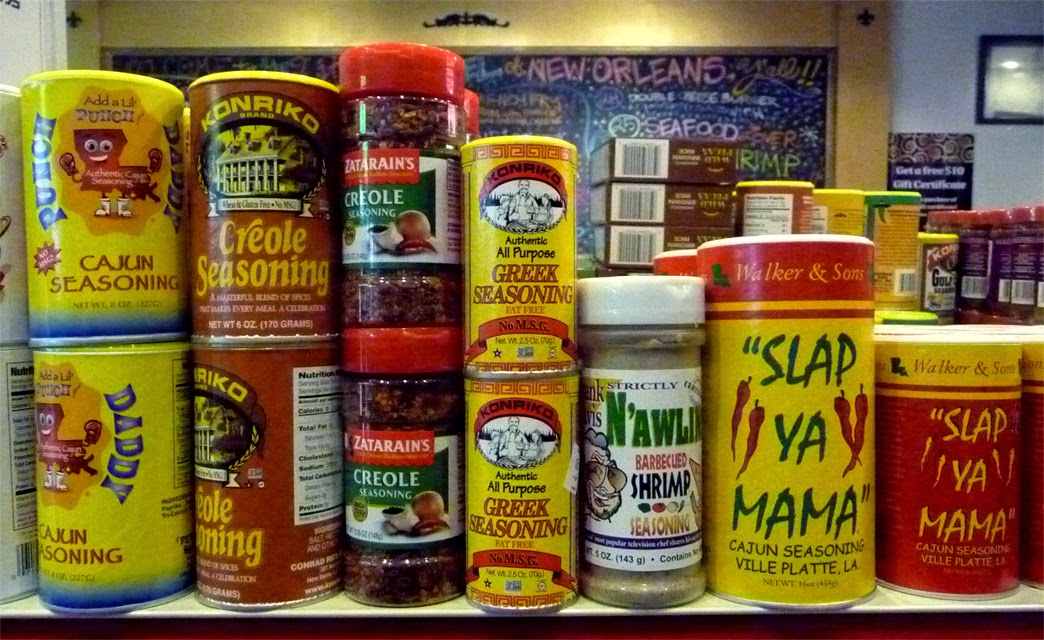 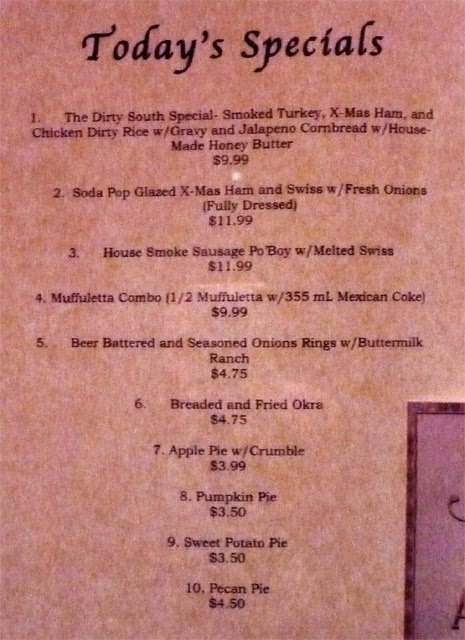 But, it's really all about authentic Cajun food here. Marcus concentrates on over-stuffed Po' boy Sandwiches, but he's expanding the menu with daily specials that include: Gumbo, Jambalaya, and other Cajun delicacies. He also cures and smokes sausages over pecan wood, in the back, like: Boudin, Andouille, Chaurice, Hot Sausage and Tasso.

The Po' boy menu is expansive with fried Oysters, Shrimp, slow-cooked Pork and Beef with Debris Gravy. Chef Marcus is Italian, so, of course, he makes a mean Muffuletta Sandwich, which is a stacked Cajun/Italian coldcut deli sandwich smeared with a house-made olive salad. He uses Leidenheimer, a New Orleans French bread, for his sandwiches. To quote Marcus: "And quite honestly, I would not have done this place if I couldn't have got that bread." 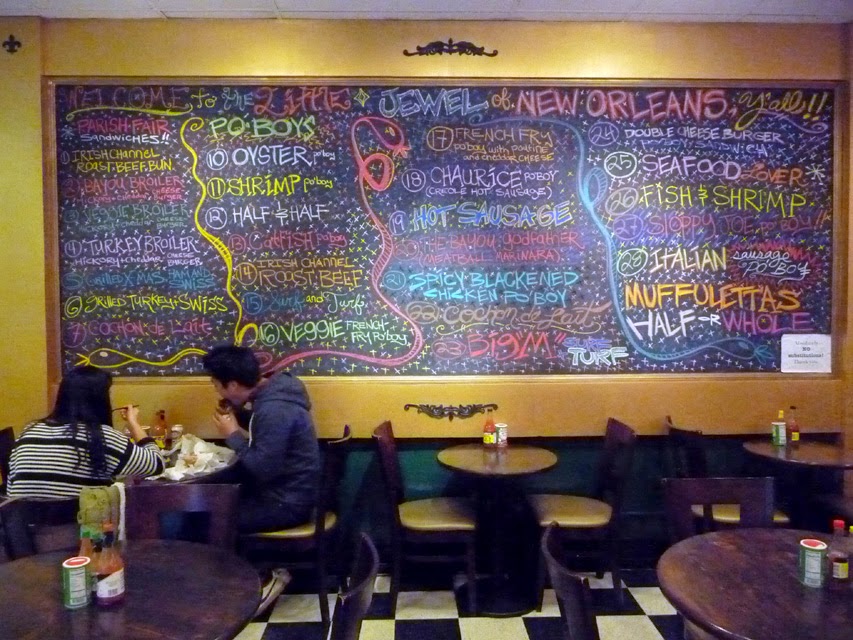 Be sure to listen to our colorfully profane, wacky chat, while I was shooting Little Jewel in Chinatown. Marcus drops a few f-bombs, but it's all in good humor.

Well, that's enough blathering, so check out my informative, fun, and coolly shot Restaurant Nocturne XIV. (I have a list of the restaurants with a link, after the video; just click on a name to see their website, with all the menu details and updates, their address, and contact info.)

To see more Restaurant Nocturnes, just click on any name below: