Wake up and smell the mimosas and cereal at the monthly Saturday Morning Cartoon screenings from Cinefamily Jr. that's compiled and presented by Simon Oré and James Fino. Just check out my video below to see all the delicious details, that include a Cereal and Mimosa Bar in the patio out back - and yes, you can bring your full bowl of cereal into the movie theater and watch cartoons!

Located in Los Angeles right across from the Fairfax High School parking lot, the refurbished Silent Movie Theater presents the most prolific and varied cinema experience in town (click here to check out the movie schedule for this month.) And you can get your fill of cereal goodness and cartoons the first Saturday of every month at 11am. 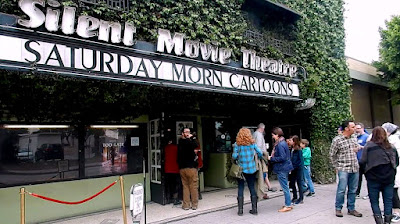 But be sure to get to their back patio early to satiate your sweet tooth. Just passing the one year mark, this cartoon fest has been slowly building their audience by selecting primo cartoons -- from roaring 1920's flapper Betty Boop, to the present day surreal Adventure Time cartoon characters. There's never a dull moment on the big screen. The next show this Saturday is themed Space and Science, so expect Dexter's Lab and hopefully Looney Tune spaceman Marvin the Martian.

I go for the cartoons, but a mid-morning Mimosa from the back patio bar sets the mood perfectly. And for the kids (or the young at heart) you can get your fill of sugary cereal from the Cereal Bar table, that features a special cartoon themed Mix of the Day. 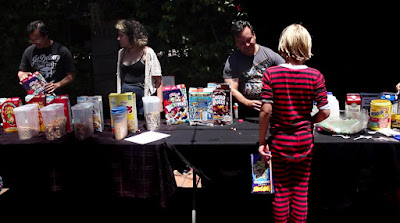 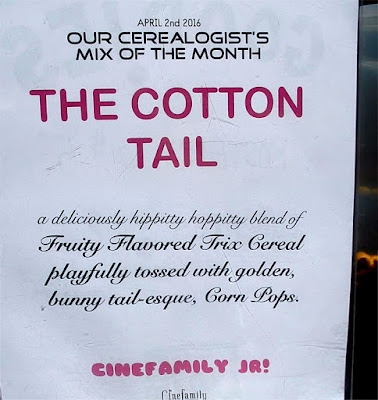 It's an indulgence I know, and not for the faint of palate, but I try to stick to a buttery croissant or two, or a bland cereal with plain soy or almond milk...yea, right, a chocolate donut has been known to end up on my paper plate. Did I mention the Cereal Bar is gratis? You do have to purchase a movie ticket and the Mimosa Bar accepts donations. But the price is still right for this Cheap$kate Cinefile.

Under the banner of Animation Breakdown, the cartoon programmers Simon Oré and James Fino are animation veterans, co-founding Starburns Industries. Just click here to see their bios, that include the stop motion feature Anomalisa. Their animation programming runs the gamut and I have not had a disappointing Saturday matinee yet (click here to see all the fun times you've missed.)

My own animation background is mainly in stop motion. Just check out many of my recipe videos on YouTube to see what I'm up to. And like any red-blooded Baby Boomer, I grew up pinned to the boob tube during the Golden Era of Saturday morning cartoons. Favorites included: Bugs Bunny, The Rocky and Bullwinkle Show, Mr. Magoo, Felix the Cat, The Jetsons, The Flintstones, Johnny Quest, and on and on.

So if you're a local, rub the sleep from your eyes this Saturday morning and don't even change out of your PJ's. Just grab a blankie or your fav stuffed animal and head right to Cinefamily Jr's. cartoon fest to fill up on vitamins C and M, that is, Cereal, Cartoons and Mimosas!

Hindsight
A couple of notes on my video above. The audio clips under the patio footage are from old television cereal commercials, mainly from the 1960's.

Since the Saturday Morning Cartoon show happens once a month, my footage of  Simon Oré and James Fino is culled from several of their intros, so their pj's may change from shot to shot. I tried to get an overall feeling, so footage appears mismatched, but what they have to say is more important than shot continuity.
Posted by 99 Cent Chef at 6:25 PM