Except for the missing sausage part, Larry The Cable Guy Biscuits & Sausage Gravy frozen breakfast side is a decent Deal of the Day. I was ready to make joke that Larry should stick to comedy, but his cable reception for food is okay, at least for a blue collar breakfast.

The gravy part is creamy and flavorful, with a little black pepper heat. There is even a little bit of green bite from parsley. While the gravy is too salty, that's normal for most frozen fare, so I'm not that shocked. 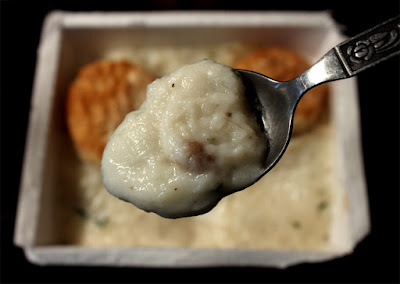 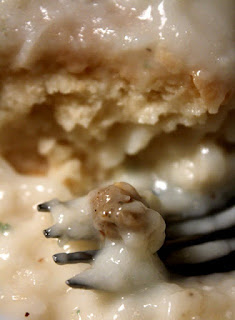 The gravy had a nice cream consistency with a little bit of cooked sausage flavor. And they give you plenty of gravy to spoon over the biscuits.

As often the case, the box photo showed the gravy studded with sausage - well, not in this particular meal. I did detect a couple tiny scraps of sausage, but nothing near what the box illustrated. Hmmm, could just be my bad luck of the draw? Since I only got one meal, it's possible that others may have more sausage. 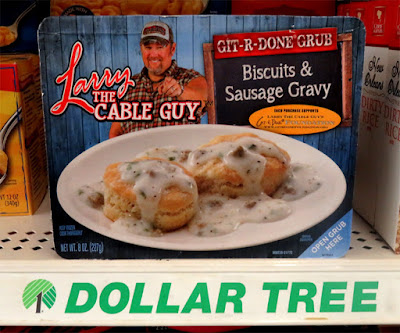 It is hard to review the sausage part of this meal when I could could not find enough to analyze. So I can't complain or praise something that is barely there.

I was pleasantly surprised how the biscuits microwaved. They held up quite well, still dry even floating in gravy, and tender too. I did have one small biscuit corner that was slightly tough - microwaving can cause hot spots. 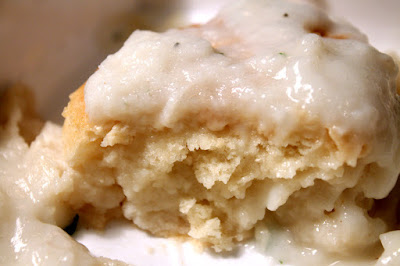 While the biscuits were not flaky fresh they had some springiness left. It did not have that crisp shell top that fresh from the oven biscuits have.

We all have our favorite type of breakfast biscuit. These turned out somewhere in the middle, for me. The biscuit flavor was fine and mixed well with the creamy gravy.

The ingredients list is not too long either, which is a relief. Can't say the same with a lot of Deal of the Days I've tried. 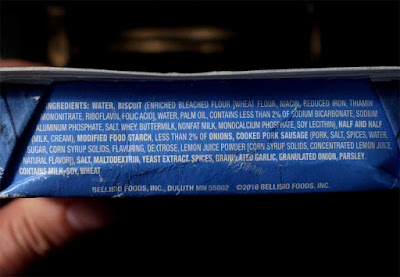 So on my Cheap$kate Scale of 1 to 9, 9 being best, I give Larry The Cable Guy Biscuits & Sausage Gravy a 6 ! I had to take off a few points for lack of sausage and over-saltiness.

This Deal of the Day would compliment a regular plate of scramble or fried eggs quite nicely. It is always better to have fresh baked biscuits for breakfast, but Larry The Cable Guy Biscuits & Sausage Gravy is not a bad way to start the day. 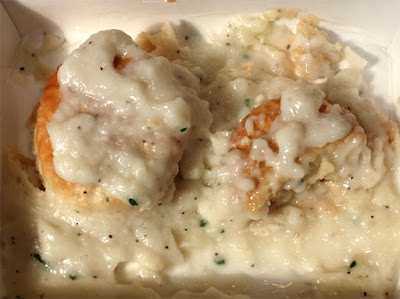 Tried a couple and I just got back with 6 more tasty treats. They used to have frozen White Castle but no longer. They did have non-dimmable LED bulbs 2 for a buck. Outstanding!

hi Howard, what I like about these are the biscuit texture, really close to homemade, not like those refrigerated flaky versions that most places stock. Yeah, I just picked up a 2 pack of White Castles yesterday - they come and go here, so I usually get a few to keep in the freezer, when they come back ;-p

It looks so cheesy but yummy as well. Thanks for sharing.