What dessert do I bring to a patio BBQ? Well, I took a chance with Dolce Tuscano Miini Vanilla Cream Puffs that I bought for $1 at the Dollar Tree, down the street from my place. These confections reside in the frozen deli case, along with ice creams and frozen dinners. They are described as "Delicious creamy filling inside a flaky European-style pastry" - hey, they gotta be good enough for a party, right? 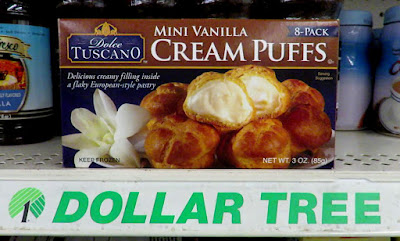 They needed defrosting, first, although I ate one that was semi-frozen, and liked it that way - the outer pastry was soft and the vanilla pudding inside was slightly frozen.

My neighbors were just starting to barbecue when I got there, so there was time for the Cream Puffs to finish defrosting. 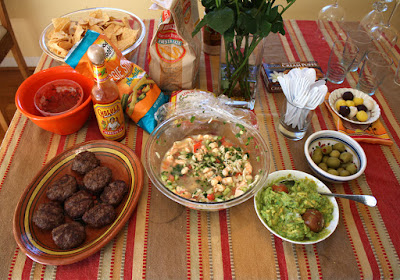 Normally I would not subject friends to my filming (yeah right,) but Bob and Anne were game and I thought it would be a nice change of scenery to let them share screen time with me, plus it's always interesting to show how tastes vary. But overall I was not too surprised at the Cheap$kate Dining rating numbers given in the range of 1 to 9, 9 being best. 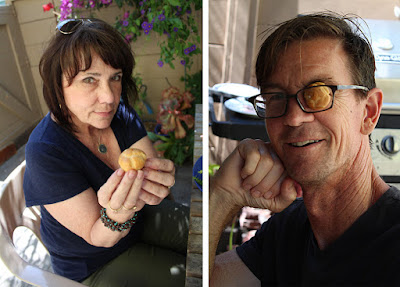 Bob and I were on the same page with an above average rating, while Anne liked the cream but dissed the pastry (see her revised rating* at end of this post,) thus dropping it a few points. I know what she means. The advertised flaky crust was not flaky, but slightly soggy -- that's the problem with frozen pastry desserts.

So I can't really blame purveyor Dolce Tuscano too much for that, they're handicapped right off the bat. 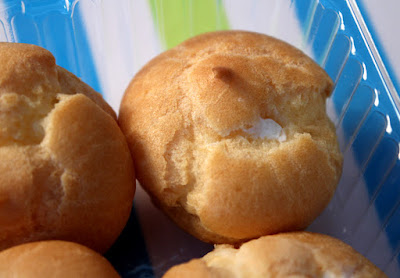 The pastry part was fine with a bread crust texture and taste, although slightly damp from defrosting. Maybe a solution is to make sure the pastries defrost out of the box so the moisture evaporates and the crust dries out.

Everyone agreed that the creamy filling was the best part of this cheap$kate dessert. It's light and fluffy, not too heavy. The filling is very sweet with strong vanilla flavor. And the cream is a nice contrast to the pastry.

You get 8 ping pong ball size pastries, so that's great value for a buck. The ingredient list is heavy on sugar, but it is a dessert. 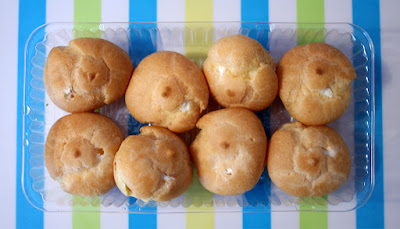 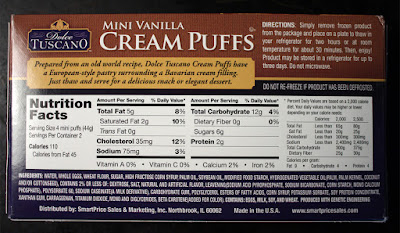 I have a comment on my YouTube channel that states they don't carry food items in their local Dollar Tree. I think for Los Angeles the competition is fierce for 99c and dollar stores, so Dollar Tree has to up it's game here and stock more food items. My local one carries all manner of frozen veggies, chilled eggs and cheese, dried pasta, canned beans and pasta sauce -- all for a buck each.

So how does my latest Deal of the Day rate to my guests, Bob and Anne? Well you will have to watch the video below to get their Cheap$kate Dining rating of 1 to 9, 9 being best.

But I will give you my rating right now. I thought Dolce Tuscano Miini Vanilla Cream Puffs are a decent Deal of the Day and give them a rating of 6! I, too, take of a couple of points for the non-flaky crust, and blandness. Maybe a better defrosting technique is needed to improve the rating? But for a buck this is a good deal and I would serve them again for my next patio BBQ gathering.

*Anne and I have exchanged a few Facebook posts and she actually has upped her Cheap$kate rating by a couple of points when I mentioned the pastries are kept fresh frozen in the deli case - not just set out on the grocery shelf forever, jacked up on preservatives.

Will have to try them !
Say hi to your participants.