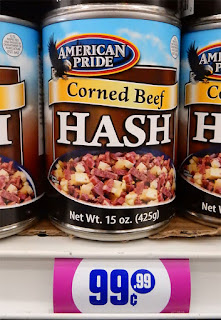 I am a fan of Corned Beef Hash and my latest Deal of the Day is quite tasty, even from a can. What makes it a hash is the addition of cooked diced potatoes. There are a lot of purveyers of canned Corned Beef Hash out there, and as for this one, American Pride, it does the job fine.

The can instructions says this Hash is already cooked and ready to eat - well, I would give it a seared caramelized crust first, then serve. It's too much like a greasy and meaty potato salad texture, kinda off-putting to me, in it's raw state.

Corned Beef is cured with sugar, salt and coriander spice, so that is a lot of flavor. You can see my recipe here, to make your own Corned Beef, or Pastrami, sometime. 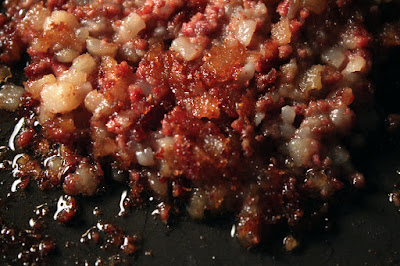 I like my Corned Beef Hash with over-easy eggs for breakfast. I cook the Hash about 5 minutes until it has a crispy crust on one side, then I get the eggs going. It is best to use a non-stick pan so it's easier to turn over crispy Corned Beef Hash. But if you use a regular frying pan, be sure it's well oiled.

As with typical Corned Beef, this version is salty, but not too much to overpower everything, so you don't need to salt the eggs, too. I just add a little pepper to my eggs.

And when the eggs are done, the best part is breaking the yolk and swirling it into the hot Corned Beef Hash. Next cut out a hunk of egg white and scoop it up with a chunk of Hash. Boy is this a tasty mouthful.

I'm sure this Corned Beef Hash would combine with scrambled eggs, too.

I used about a third of this 15 ounce can for one serving. This may seem like a large amount, but once the Hash is heated, it starts to reduce in size, melting out the water and any beef fat. 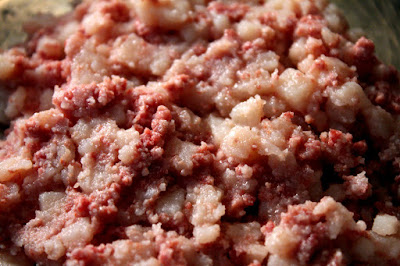 right from the can

Now there are a couple of minor problems that the can cover photo doesn't show. First, it looks like there are large pieces of  corned beef  brisket. The salty and pungent corned beef taste is there in spades, but the meat texture is more ground meat than typical chunky beef. So the potato and meat mush together in flavor.

The potato part is okay though, while the cubes are on the small side, they are big enough to sometimes have a nice plain potato starch taste. 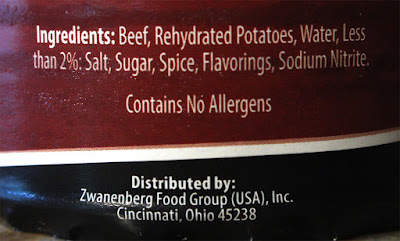 The ingredient list short, mostly corned beef, potatoes, sugar and a little more salt. You don't want to serve this every day as there is a lot of fat and sodium. 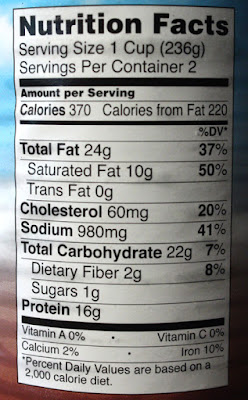 My latest Deal of the Day is a pungent way to start the day. I would give this Hash another try, too. So on my Cheap$kate Dining Scale of 1 to 9, 9 being beast, I give American Pride Corned Beef Hash a satisfying 6! 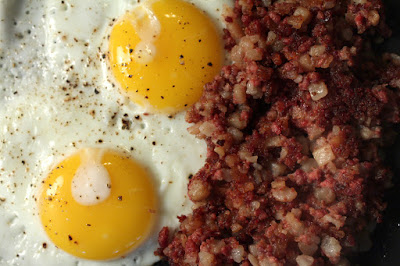 Thank you, 99 Cent Chef for maintaining this blog over the years. I discovered you several years ago, and pop in periodically when I'm tight on cash for ideas on how to creatively stretch my dollars. I love your low budget gourmet ideas, and am a big fan of watching your animated images. It's such a clever and visually interesting way to show the process of your recipes.

I read an article from an airline magazine (Spirit, I believe) a few years back where the article writer had just moved to Los Angeles and challenged herself with the task of throwing a tasteful house party for her new posh, creative-industry friends using food and decor found only at the 99c Only Store. She wrote about making sangria using fresh, seasonal fruit, and cheesy garlic breadstick appetizers, and described her budget friendly tablescape. I think I was trying to search for that article again online when I discovered your blog. So glad I did!

I just recently hosted a gala to raise funds for a mission trip to Ireland, and created our tablescapes using only items from the 99c Store--LED tea light candles nestled in tall glasses filled halfway with split peas atop framed mirror art. The effect was quite charming. It amazes me how much cool stuff (makeup, decor, cooking gear, toiletries, fresh produce, hardware, toys, etc.) can all be found at the 99c Store. I'm so grateful to live in Southern California and have access to this amazing resource.

Thank you so much for your continued blogs, 99 Cent Chef!! Cheers to many more years, and God bless!!

Thanks Brenda for your kind and perceptive prose. Not everyone gets what I do, so it's nice to hear from you. It would be an ideal world if everyone could afford the best and healthiest, but for those who just get by, I speak to them.

Just to piggyback a bit but I too appreciate you keeping up on the blog. I check in from time to time and am always pleasantly surprised, plus your stop-motion work is fun to watch. Great work!