My latest Deal of the Day is a Lobster Egg Roll by Imperial Garden and a Product of the USA. They are showing up in the refrigerated food section of my local Dollar Tree store. 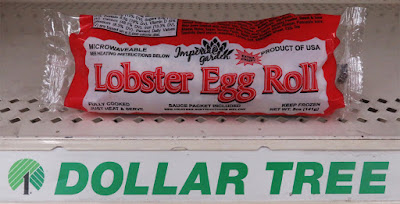 First off, I sought and could not find any lobster. I did run across a little fake crab though. And I mean very little. But there is a subtle seafood flavor to the filling.

The filling is mainly shredded and sauteed cabbage, which is fine really, most egg rolls are. The cabbage is plentiful and quite tasty. It's cooked soft and seasoned well. Other ingredients include: onion, carrot, garlic and celery. Sesame oil and mirin add extra flavors.

But if lobster is listed as the second or third ingredient, then I was hoping (against my better judgment) that there would be a small piece of lobster or two thrown in. All I tasted was a few minuscule flakes of fake krab. And I tested 3 of these Lobster Egg Rolls. 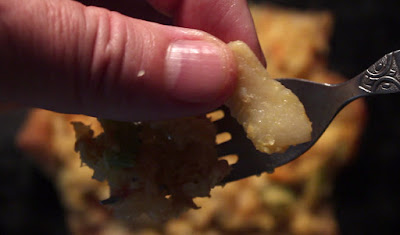 A small flake of fake crab, or krab.

I am a fan of fake Krab and use it in a tasty Mexican-style Black Bean & Seafood Ceviche and a sushi California Roll. Fake crab, or Krab (pictured below,) is ground and processed white fish, made to look and taste like real crab (click here to read about it) and costs just 2 to 4 bucks per pound, compared to expensive real crab prices.

And I did an autopsy on the Lobster Egg Roll, and put on my reading glasses, too, in search of lobster. If it was there I couldn't see any. Maybe it's ground so small that it just blends in with all the sauteed veggies?

What this Egg Roll lacks in Lobster, it at least makes up in quantity. This is an extra large Egg Roll the size of a fast food burrito, at about 6 inches long, so most will be satisfied and stuffed. 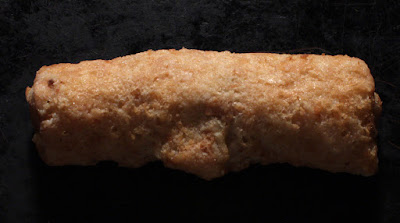 It's a relief that the crunchy wonton skin of the egg roll wrap is tasty - it has that deep-fried-in-oil lusciousness.  Now because I microwaved the Egg Roll the wrap was a little mushy. Next time I would let it reach room temperature and either heat it up in a frying pan or bake it, according to the package directions. 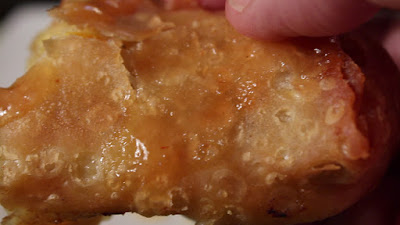 You get a small packet of sweet and sour sauce. It is very good with a mainly pineapple juice flavor with just a little sour vinegar. It goes well with the sauteed veggies and egg roll wrapper. 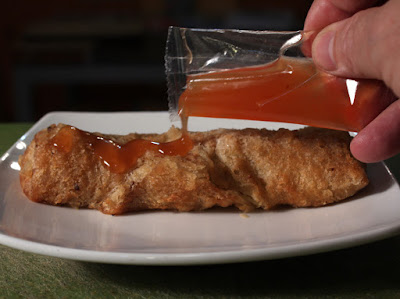 I thought I would take a chance with a Lobster Egg Roll from the Dollar Tree -- oh, well, I should have know better. Next time I'll just stay with regular pork or veggie egg rolls.

As a basic Egg Roll for a buck, this is an okay Deal of the Day. Where it fails is the non-existent lobster and very little fake crab. 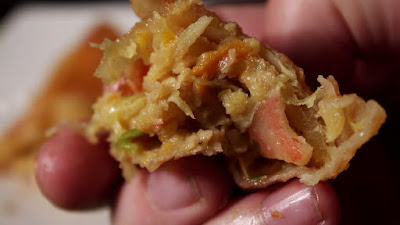 I'm giving this Deal of the Day a double rating. That is, one rating for the seafood filling and another rating for the veggie stuffing - it's a 2fer!

So on the 99 Cent Chef's Cheap$kate Dining Scale of 1 to 9, 9 being best, I give Imperial Garden Lobster Egg Roll a...? Hmmm,just watch the video below to see how it rates!

They are delicious and good for you 😊

"Good for you" is a stretch, much like saying deep-fried zucchini, onion rings, and pizza are health foods. They have a few nutrients, but there are far better options.

Alright calm down this is a blog called the 99 Cent Chef, so take it with a grain of salt, ha!

I got the chicken one. I didn't search for chicken, but it was tasty. Good enough for work meal. Love the sauce.

I tried the chicken one today and it wasn't bad at all, I'd probably get it again!

Tried the chicken one today, made a good lunch for work. Microwave for 45 seconds and then 10 minutes in the toaster oven made it was nice and crispy. Definitely worth a dollar and I would buy it again. My favorite junk food eggroll is still Jack in the Box but these are a close second and a lot cheaper.

I love the shrimp rolls