Fresh from the microwave my latest Deal of the Day is a White Castle Original Slider from my local Dollar Tree. You get 2 tiny dinner roll sized burgers, so you could say I'm living small, not large! 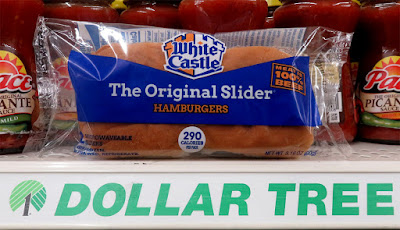 This Cheap$kate Dining Deal is from White Castle, the first hamburger chain in the United States started in 1921. The chain originated in Wichita, Kansas started by Walt A. Anderson. You can read White Castle's interesting history by clicking here.

I never had a White Castle Hamburger until I moved to Los Angeles. And that first bite was over a decade ago when you could get them at a pop-up fast food joint on Hollywood Boulevard, as a promotion for the release of the movie "Harold & Kumar Go to White Castle."

Now I sometimes get them at, of all places, The New Beverly Cinema in West Hollywood where they are sold as a movie concession meal alongside hot dogs, They are heated up in the microwave and sold two at a time for a few bucks. If you are a movie buff then The New Beverly Cinema, that's owned and often programmed by Director Quentin Tarantino, is the place to be. 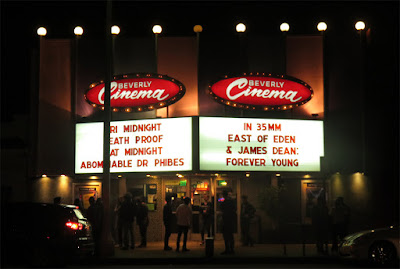 Typical White Castle Burgers are simplicity itself - just a bun, fine-chopped onions, pickle, and a thin hamburger patty (but no pickle in frozen versions like below.)

I see packages of them now in grocery frozen deli cases, and lately, at my local Dollar Tree store - two burgers for a dollar! I immediately grabbed a couple of packages to do a Deal of the Day cheap$kate review for you. 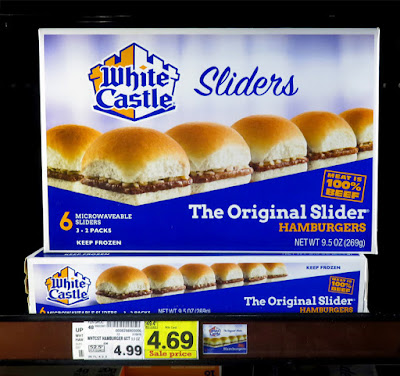 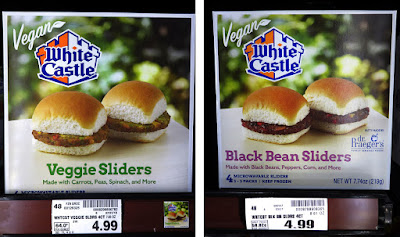 White Castle frozen sliders are the most popular ones on the market. They are sold cooked, frozen, and need to be reheated. These frozen versions do not have pickles since microwaving is involved - pickles and extreme heat are not meant for each other, but you can always add your own gherkin slices when the burger is ready to eat - kick them up a notch with a slice of American cheese.

White Castles are much smaller than I am used too - these burgers are closer to Happy Hour sliders. And that's okay with me.

The buns are actually white bread dinner rolls, and light and springy to the touch, even with microwaving - which only takes a minute or so. The buns hold up quite well and did not get soggy being zapped. 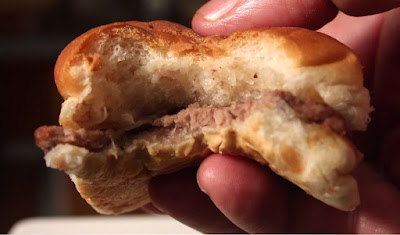 There is a sprinkling of finely chopped onion for a little extra texture. Because of microwaving they lose some crunch, but you can still taste slight onion rawness. It reminds me of a Big Mac's use of minced onion - they are there to compliment, not overpower, like typical thick sliced onion can (In-n-Out burger fans know what I'm talking about.) 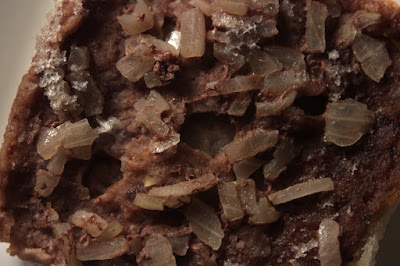 There is no ketchup, mustard or mayo, so add your own if desired.

Since the bun is small, the hamburger patty is too. These hamburgers are meant to be eaten in two or three bites - not enough heft to take the time for savoring too deeply. Most peculiar is 5 holes punched into the beef patty. I Googled to find out and the reason is the meat cooks evenly, yea right, sounds like phony baloney to me, more like it's to use less beef per patty! 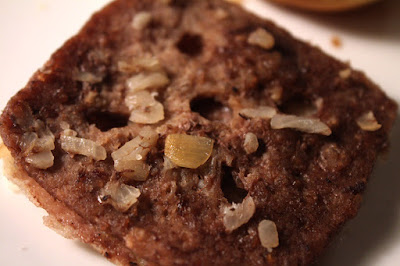 The ground meat is lightly seasoned and has a slight onion powder flavor. The patty is very thin, so don't get these if you are jonesing for a meaty meal. But what is delivered by White Castle is still satisfying - especially for the Dollar Tree price point of $1 for 2 slider/burgers! 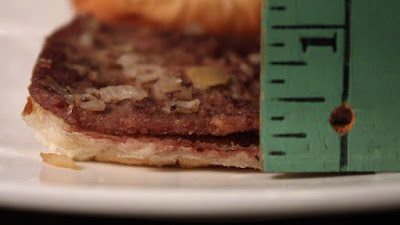 So, on my Cheap$kate Dining Scale of 1 to 9, 9 being best, I give deli case White Castle Hamburgers a solid... well watch the video below for my rating!

White Castle Hamburgers are no competition for LA classics like In-N-Out Burger or Tommy's Burgers, but for a quick bite, they will do the trick, especially when I'm craving a snack at a midnight movie in the New Beverly Cinema.

There is a copy cat recipe. Add some water to your beef, roll thin with small patties, and add the holes. This steam cooks the slider. Caramelize the onions on the side. Toast the rolls. Not bad.