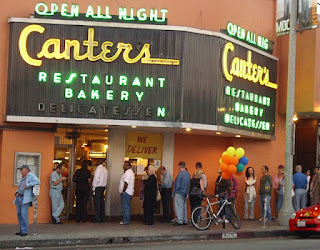 Lately, two L.A. eatery landmarks had anniversaries: Philippe's downtown diner served 10 cent French dip sandwiches for its 100th year last Monday, and yesterday, Canter's Delicatessen sold corned beef on rye for 60 cents, celebrating 60 years in the same location. The Chef missed Philippe's 10 cent French dip but would not be denied 60 cent corned beef on rye. Today the Chef has a delightful deli sandwich hangover. Along with the sandwich was served a small serving of potato salad, pickle and a cookie. After calling his Film Noir, Screwball Comedy, Grindhouse, movie-going buddy, Drew, the Chef headed to the Jewish Fairfax District to rendezvous. Most surprising was snagging a parking spot at Canter's; also, the "to go" line was short, and there were some empty dining room tables - at least at three in the afternoon. The Chef brought along his camera to record this momentous culinary budget happening. 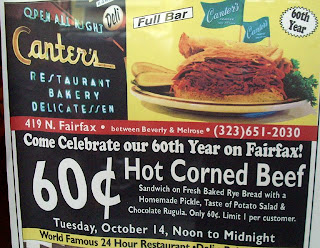 Once we were seated, our cheerful punctual waiter greeted us knowing what we were there for (he suggested the anniversary special). The corned beef arrived before we could get more than a swallow of Heineken (on the way to our table, the Chef noticed a dozen sandwiches prepared in advance at the serving station). The exceptional potato salad amounted to only two bites; the pickle spear was palate cleansing; the corned beef was lean and satisfying, the rye pungent with a hard crust, and the small chocolate rugula cookie a pleasurable denouement. Perfection. The only problem was a limit of one sandwich per customer - will this stop the Chef? Watch the video to find out!

Go here to embed or view video at youtube.

Tasty Sandwiches! Your blog is great.

Yummy! And the price is definitely right!