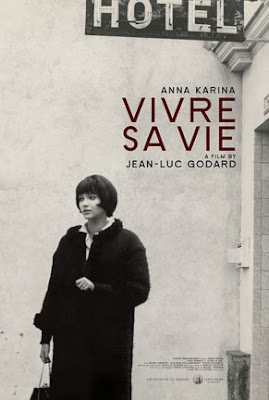 The Nuart movie theatre, in West LA, provides The Chef his fix of Jean-Luc Godard reissues. This week "Vivre Sa Vie" from 1962 is playing through Thursday; shot in black and white and starring La Nouvelle Vague siren Anna Karina. The Chef loves 1960's French New Wave films, especially early Godard -- like The 99 Cent Chef, he tosses all rules out the window. Story, acting, shooting, editing, graphics and music are refreshingly scrambled, stretched and chopped up - unpredictable. Godard on the big screen is a rare treat The Chef will not miss. 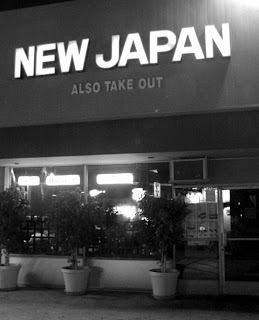 Directly across the street from the Nuart, in a strip mall next to a 7/ll, is the Japanese restaurant New Japan. After ordering, The Chef cradles a brimming sake cup by a window seat and watches in puzzlement as Nuart moviegoers queue up on a chilly Fall night, waiting in line for the movie to start; don't they know just across the street awaits hot sake? The Nuart seldom sells out, so if you are in line for the 7:30 PM showing tonight, please join The Chef across the street instead; where he will be dining on a favorite dish: fried pork cutlet. The panko breadcrumb crust is fried to perfection and the cutlet is presented sliced, served simply with white rice and a green salad. Don't forget to grab the squeeze bottle of Tonkatsu sauce for the cutlet. 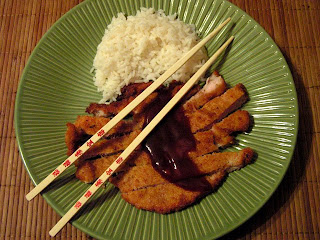 The Chef tried his hand at this dish. The verdict: his 99 cent version is a Palme d'Or winner, if Cannes awarded entrees. The 99c only Store is selling plain bread crumbs; while not panko it works fine. At my local Latin market, pork sirloin end-cut chops were on sale for 89 cents a pound. Roll film, and action! 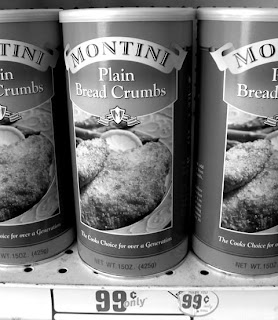 Directions
Whisk one egg in a bowl. Salt and pepper then coat pork loin chops in flour, dip into egg
mixture and finally coat well with bread crumbs. Refrigerate one hour, time permitting
(this makes for an extra crispy cutlet.) Heat oil for frying (hot!) Depending on cutlet's
thickness fry about 5 minutes each side until bread coating is golden brown. Check for doneness with a fork - clear juices. Serve with rice and a simple green salad.

Am I losing my mind, or wasn't there a fish recipe posted somewhere a couple days ago?

Hi Nate's mom, your sanity is not in jeopardy - yes, The Chef took down the fish recipe to make room for Godard & Cutlet. Please check back later in the week for Homemade Canned Fish Fillets.