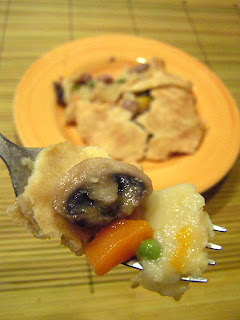 Many years ago in the Chef's bachelor days, a favorite late night winter meal was a couple of frozen pot pies. His frozen pie preference was Swanson. More expensive than Banquet pot pies (Banquet uses processed cubed meat), the extra quarter in price was worth it. After a few years, even pot pies get boring, so the Chef came up with veggie variations - - allow the frozen pot pie to defrost a little, lift off the crust top and add a sauteed sliced mushroom with some chopped onion, garlic, bell pepper and a few frozen peas. Very simple, inexpensive and quick to do, perfect bachelor food for the future chintzy chef. 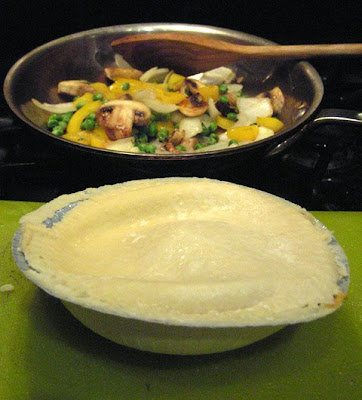 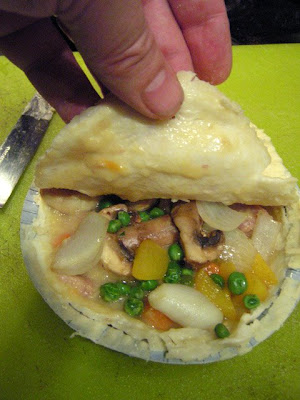 Directions
The Chef prefers oven baking over microwaving (after all a pot pie is all about the flaky brown crust), so preheat oven per box instructions. Remove pot pies from cardboard packaging and allow to defrost for about 10 minutes. Saute veggies. Use a knife and separate the top pot pie crust by prying loose along the outer edge (don't worry if top crust breaks in pieces, it will cook fine). Carefully lift off the top crust and add sauteed veggies. Re-assemble pot pie top crust and bake in oven following box directions (350 degrees for about 45 minutes). With the extra veggies make sure to place pot pies on a cookie sheet or foil -- sauce may overflow. When ready, allow the pot pie to cool for a few minutes, crack open a brewski and plop down on the couch with your bachelor
(or bachelorette) pot pie.
Posted by 99 Cent Chef at 8:29 AM

Is getting potato flakes and adding them to the top of the pot pie after the vegetables are ready, and broiling so the top gets browned?

Very ambitious, but give it a try and let us know how it turns out!
Be sure to watch closely when broiling, you don't want to burn your extra stuffed pot pie!

I like to microwave the pot pie
and then dump is over a bowl of cooked ramen noodles,but only use about half the season packet...
cheap and filling...
Geno!!

Wow!! Geno, your melding of 2 budget staples is an inspiration!