In a bind to get a side dish for the in-laws tout de suite to go with their traditional Christmas roasted orange glazed duck, the Chef whipped up an impromptu tasty yam dish. Trying to find something open on Christmas day is such a hassle, so the Chef dug deep through what was on hand -- a left-over whiskey airline bottle from his "Egg Nog & A Tipsy Tree Trimming" video from last week, a package of pumpkin seeds hidden behind a roll of wax paper, and who knows where and when the jumbo can of yams was bought. 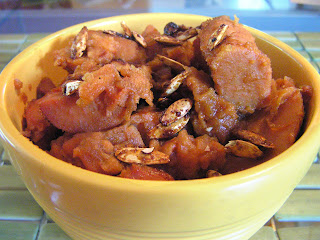 To rescue bland canned yams, the Chef mixed a flavorful sauce of whiskey, cinnamon and nutmeg, then oven baked for half an hour. A crunchy contrast in flavor is provided with the addition of pumpkin seeds sauteed with brown sugar. For the holidays, canned yams are a quick (no potato peeling) and tasty budget side. 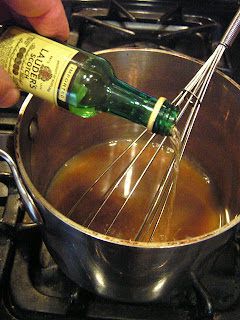 Ingredients
99 cent airline bottle of whiskey (bourbon, scotch or rum are substitutes)
1 can (29 oz.) of yams (keep liquid for whiskey sauce)
1/4 cup of roasted pumpkin seeds (or almonds)
1 tbsp. of brown sugar
1/4 tsp. each of cinnamon and nutmeg 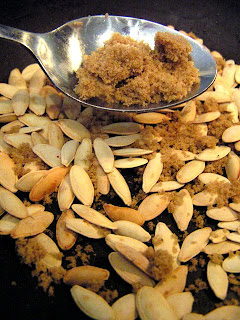 Directions
Heat liquid from the can of yams and mix cinnamon, nutmeg and an airline bottle of whiskey. Pour liquid over yams and bake in an oven-proof dish for half an hour at 375 degrees. In a skillet, mix pumpkin seeds with a heaping tbsp. of brown sugar over a low to medium heat. Stir and cook until sugar melts and seeds begin to brown, about 10 minutes. Place seeds in a shallow bowl to cool. Sprinkle a few pumpkin seeds over each serving of yams.

I'm new to your Blog!

New, with an airline-bottle of scotch someone gave me (I do not drink) & 3 pounds of fresh yams at home!

Good Timing!!! Thanks for the recipe.