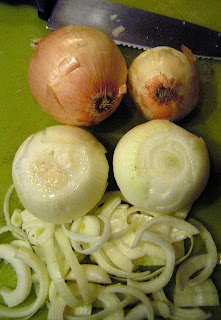 The Chef's French Onion Soup recipe is simple to make -- although you will be cooking onions for a half hour, so tune in your favorite radio program and start sauteing; time will fly. 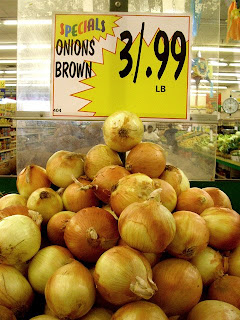 My local Latin market practically gives brown onions away, and all you need for this dish is a measly half dozen. The other main ingredients are French bread and cheese. Less expensive day old bread is perfect to toast, melt cheese onto, then float in the finished French onion soup. For this recipe the Chef used a six ounce block of white cheddar from the 99c only Store; try out your favorite cheese, or even leave it out to cut calories.

Onions are sauteed in half a stick of butter or olive oil. I also used beef bouillon cubes, but you can use vegetable broth to keep it vegetarian; it will taste delicious either way. 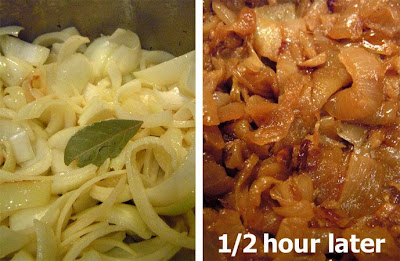 Directions
Start heating water with bouillon cubes over low temperature. Melt butter and add chopped onion and a bay leaf over medium heat in a large soup pot. This is the long part so put on the tunes, or, if you're like me, NPR radio. 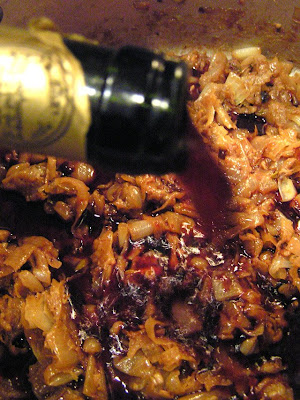 Stir onions so they don't stick to the pot and burn too much. After about a half hour the onions should be medium to dark brown and taste deliciously sweet. At this point you can set a little aside for your future grilled cheese burger!

Finally add broth to onions and cook for half hour to an hour at a low simmer - the longer the better as the flavor will intensify when soup is reduced by about a third. 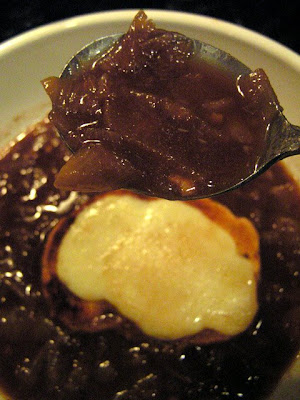 You can serve French onion soup with a thick slice of toasted French bread topped with melted cheese floating on top, or not. Toast French bread in a pan or your broiler. Flip toast when brown and add sliced cheese to toasted side.

For the broiler, toast one side, flip and add cheese, cooking until melted.

Hey, go crazy and add sliced hunks of cheese to piping hot French onion soup; the bread just gets in the way! As this recipe is so cheap, you may as well use a time-honored French Gruyere cheese from your local favorite deli.

We love food, especially cheap food. We too have a lots of free and cheap recipe that user can
make at home. Visit us at cheap-recipe.com

Great concept, and nice to know you're really not spending that much to make delicious food.

Thanks for adding us as a friend on Foodbuzz. We welcome you to come visit our site!

Love your soup. I haven't had it for ages.