Calling all donut lovers! Imagine my feelings when I was called up on to be an "expert donut judge" at the second annual Donut Summit of  Los Angeles. My mouth watered, my stomach rumbled, and I though, do I have the chops? And do I know enough about glazed or cream-filled treats to fill those shoes? It seemed like an overwhelming responsibility. But I did create a Krispy Kreme Doughnut Recipe video (click here - it's my most popular post), and I've sampled my share of crullers and dunkers, so I concluded that I do know something about the art of dough punching. 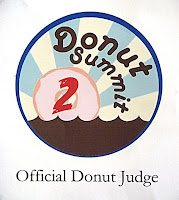 I set off accompanied by my neighbor and frequent collaborator, comedian Pete (to see some of his on-camera hijinx, click on Hitting Veggies or Pedro Pe's Shrimp Quesadilla Recipe). With camera batteries charged and a bottle of chewable antacids, we hit the freeway for a sugar-coated adventure.

Arriving at Elysian Park, near Dodger Stadium, we were greeted with the smells of cinnamon, coconut flake, chocolate glazes and vanilla cream filling.  All manner of donuts brought from every corner of our metropolis, and loads of people -- from hungry tykes to diet-breaking adults -- were hunched over picnic tables to sample them all. 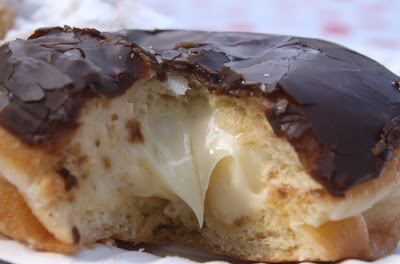 I was presented with my judge's crown -- a white hat with half a dozen donuts threaded and hot-glued onto the brim. Then a clipboard was placed in my hands, presenting a bakers' dozen of "Best" categories, including: Raised (yeast), Frosting, Fritter, Chocolate, Donut Filling, Cake, Visually Appealing, Roundest, Unconventional, Overall, Worst, Judges Choice Award, and Best Vegan. 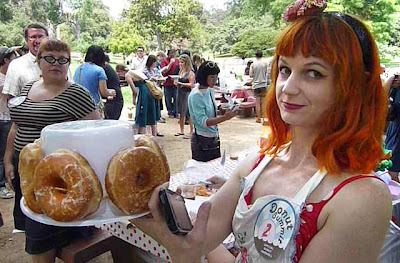 I dove in and got to work - quickly discovering some donut highlights, such as the Peach Donut from The Donut Man, the Chocolate Chip Bar from California Donuts, and the Peanut Butter Donut topped with chocolate from Stan's Donuts. The coffee house Intelligentsia supplied iced coffee -- a perfect accompaniment on this warm summer afternoon. 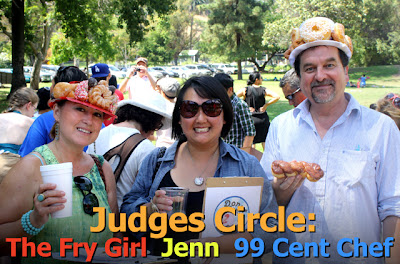 This being a park, the Blogging LA crew took full advantage, setting up games of Donut Croquet, a "fill the hole" Donut Hole Toss, and a Donut Poetry Slam, all caught on my video. Check out the winning limerick, called "The Babysitter" -- it's hilarious. 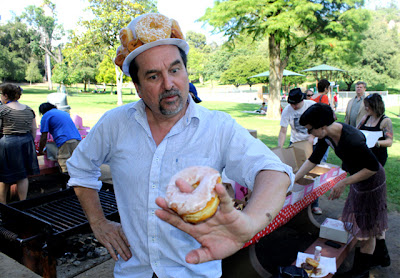 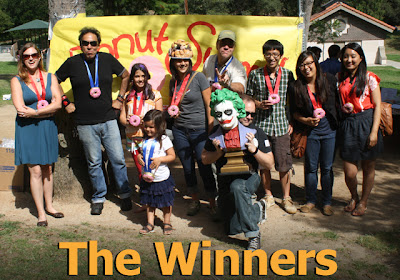 Best of all were the prizes for the winners - 'Golden Donut' medallions topped with pink frosting that the beaming winners wore draped around their necks! Click here to see Blogging LA's list of donut champs. 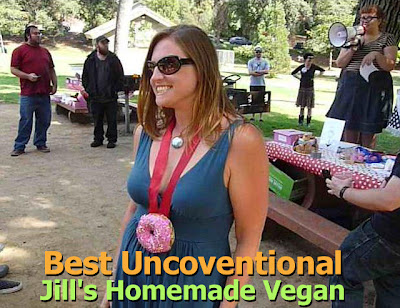 The crew of bloggers at Blogging LA were definitely fun and creative hosts.  Chef hats off to Frazgo and Alexandra Apolloni, who called me in to judge the fried batter bash. 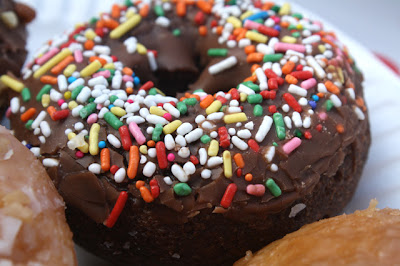 So check out the Culinary Cutup's latest video - Judging the Donut Summit 2 - your sweet tooth will be satiated. After you view the footage of kaleidoscopic confections, you may need to break out a shot of Pepto-Bismol spiked with Bourbon, to come down from the contact sugar high!


Play it here. The video runs about 5 minutes 30 seconds.

99 thanks to Frazgo, Alexandria, and all the Donut Summit 2 creative crew from Blogging LA. And bonus thanks to all the participants who brought such delicious donuts.

Fellow Judges (click on names for links): Jenn of Just Jenn Recipes (her post here) and Shelly The Fry Girl.

Also, 99 thanks to neighbor Pete for extra camerawork and comedy contributions.
To view or embed from YouTube, click here.
Posted by 99 Cent Chef at 8:31 AM

The first picture looks so delicious,so yummy..I love donuts!:-) Thank you for sharing..