It's really good! I just noticed this Soy Chorizo one day at the 99c only Store in Hollywood. I did a double take and thought, "why not try it?" When I first spied it next to the Beef and Pork Chorizo, I read "Soy" as the Mexican word for "I am," as in "Soy Mexican" (I'm Mexican), not "Soy" as in vegetarian.

For 99.99 cents, it 's the right price for this Chintz Chef, so I thought this would make an interesting Deal of the Day. I was not disappointed. 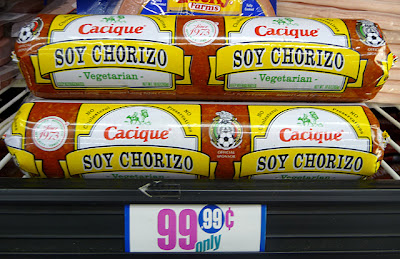 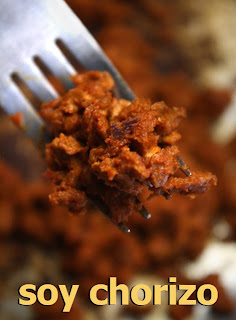 Normally Mexican style chorizo is soft like raw ground meat. This Soy Chorizo, by Cacique, is similar, but with a cooked ground beef crumbly texture, too.

Spice-wise you would be hard pressed to tell the difference to regular chorizo - it's still chile flavored and spicy hot. Since there is no meat, or fat, you may want to add a splash of oil if you are using a regular pan.

I guess what I miss the most is the grease that is rendered when a meat chorizo is browned -- it's so pungent and very flavorful. But, for calorie watchers, this is a great alternative.

The ingredient list is short, unlike real chorizo that has a long list of organ meats. Read the package to see for yourself, or go to Cacique's website here. 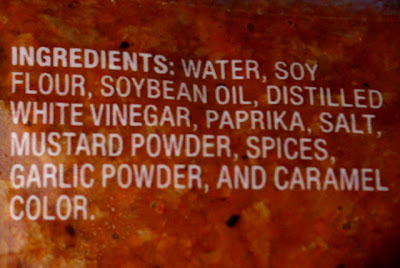 The best way to try out a new food product, I've found, is to use it in an egg scramble. This also works well if you don't know a spice and want to try it out in a recipe, cheaply and quickly.

The Soy Chorizo squeezes out of the plastic skin easily. I used about a third of the 8 ounces, and added a tablespoon of oil, as soy chorizo sticks to the pan, unlike meat chorizo which has some fat and greasy bits in the mixture.

This Soy Chorizo is already cooked, so you just need to heat it through to bring out the flavors in the chile and spice paste. After about three minutes of stirring, I added two eggs to scramble. 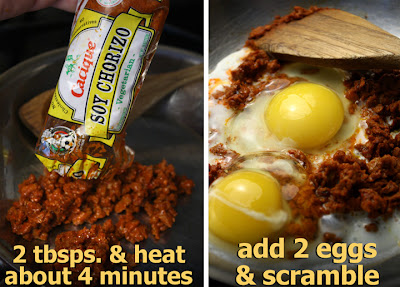 The chorizo flavors mix well with scrambled eggs -- savory and spicy. It's a light breakfast, and a tasty change of pace. You would not eat it by itself from the package, but you could add Cacique Soy Chorizo to many dishes as a flavoring. I have several Mexican Chorizo dishes I've already made, just click on a name to see my recipe: Chorizo & Eggs Breakfast Tacos, Stuffed Bell Peppers, Mexi/Turkey Burger and Seafood Paella.

So on a scale of 1 to 9, nine being best, I give this Deal of the Day, Cacique Soy Chorizo, a tasty 9! I will definitely be using this product again -- especially as a light, spicy, breakfast taco start to my day. And check back next week for another Mexican Chorizo recipe: Sauteed Chicken and Chorizo.
Posted by 99 Cent Chef at 1:08 AM

Ha, very nice with the Soy confusion. I would've been confused by it too. (By the way, in the first paragraph, you wrote "For 99.99 cents". I did do a double take at that. Ha.)

A soy chorizo sounds perfect for a vegetarian,and I loved the tip of trying new spices in scrambled eggs!
Thank you for sharing.:-)

hi TJ, yeah, our 99 cent Only Store raised prices to 99.99 cents. Maybe I should change my blog to The 99.99 Cent Chef -- although I get 99 cent ingredients from many different stores ;-p

hi Fahad, I was pleasantly surprised how tasty Soy Chorizo is -- and an egg scramble with something new is a great way to start the day!

I agree wholeheartedly. I use the soy chorizo often.

I loved the Soyrizo find at my local 99cent store but recently have only found beef and pork. I wish it was in stock more often.

Getting ready to heat the soy chorizo in a few minutes to put in low-carb tortilla wraps, add some spiced-up refried beans, some Velveeta-type low-fat cheese roll up then place in a glass baking dish and cover with diced tomatoes and some picante sauce.

Plop into the oven and heat 'em up then give them a try.

If not what I am seeking will add other spices then heat the left-overs and taste them again.

Hoping for the best!!!

First off, I'm not a vegan or a vegetarian, but I've had soy products that were passable. This soy chorizo, however, hit it out of the ball park! I bought it on a lark, and I've never regretted it! It's amazingly good and spicy, and perfect with eggs. And unlike regular chorizo, which gives me indigestion, this stuff is good all the way down. A must-buy!