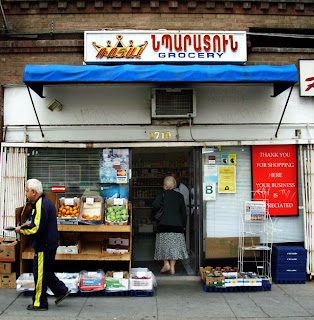 I'm not a falafel expert, even though I lived in the Little Armenia enclave of East Hollywood, and visited my share of their eateries and Mom and Pop grocery deli counters. I usually kept my menu selections of  Middle Eastern fare to kebobs, shawarmas, gyros and roasted chicken from Zankou's. Maybe it was spying those dried-looking fried spheres of ground chickpeas under heat lamps that made me skittish to place an order for falafel?

But after trying this recipe, I am a convert. For this second entree in my February Month of Sandwiches series, I made a vegetarian sammy of homemade Falafel. Man, it turned out great -- so soft and tender on the inside, yet crunchy on the outside - these fried discs of nutty ground garbanzos, flecked with green parsley and pungent onion, garlic and cumin will be in a starring role at our next gathering (Oscar party?) for sure! 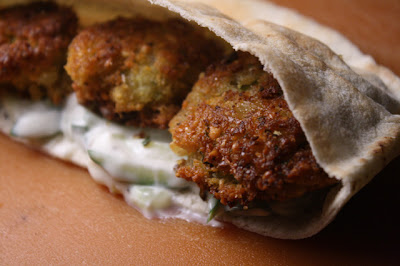 You can cook them ahead of time - it only takes 10-15 seconds of microwaving to bring them back steaming (although they are perfectly good at room temperature.) But hot off the stove top and stuffed into a pita - along with my creamy, chunky Cucumber, Yogurt and Honey Relish - is the best way to go. 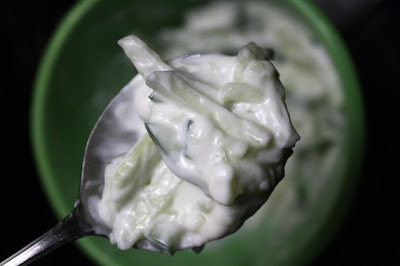 And of course, all the falafel ingredients are inexpensive -- just the way this Cheapie de Cuisine likes it. I go to a Persian market (Payless International Market) a couple of miles away on Venice Boulevard that stocks dried garbanzo (chickpeas) for $1.29 per pound. I got 2 cups of dried beans for less than a dollar -- and for some reason, checkout only charged me 99 cents per pound - score! You could always use cheap canned (and drained) garbanzo beans or chickpeas. One of my commenters roasted canned cooked garbanzos to firm them up (about 15 minutes at 350 degrees?) 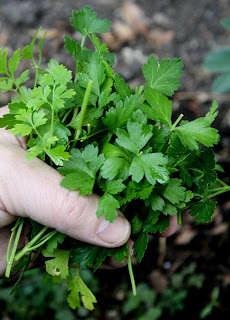 I have a parsley bush that is producing overtime, and my local Latin market also sells one bunch for less than a dollar. Onions and garlic are cheap, and a small jar of ground cumin is always in my pantry ready to be used for my forays into Western Asian cuisine.

The Falafel directions below seem long, but this entree is simple to make, once the garbanzos are soaked overnight. All you are doing is some rough veggie chopping; a quick blending of the beans and veggies; and frying the falafel patties for 2 minutes on each side. Because the falafel orbs are small, a little extra time is needed to cook them all up (about 20 balls) -- it may take 3 or 4 frying batches, depending how big the pan you use is.

A Falafel Pita Sandwich can be dressed with lettuce and tomato. Middle Eastern eateries often serve Falafel with hummus (my recipe here) or a tahini (mild peanut butter tasting) sauce. I thought a cool and creamy Cucumber, Yogurt and Honey Relish would contrast nicely with hot and crunchy fried orbs of falafel. 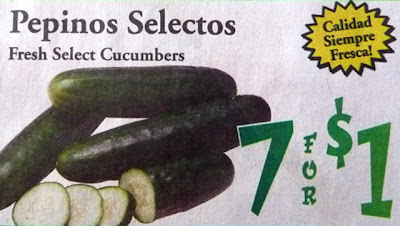 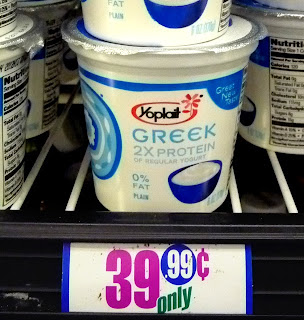 Cucumbers and yogurt are cheap, of course, and I always have a half dried-out jar of honey laying around. The relish ingredients combine deliciously -- creamy plain yogurt is very sour, but a tablespoon of microwave-reconstituted honey (or your favorite sweetener) dulls that too-sharp edge. This relish couldn't be easier to make: just julienne half a cucumber and mix it all together. Sweet, crunchy, creamy and fresh.

Because I made a double-sized quantity of falafel, I'm taking some into work today. I'll let you know how they go over (who am I kidding? They're sure to be a hit!) If you want to lower the carb count, leave out the pita -- a plate of falafels with my Cucumber, Yogurt and Honey Relish is good on its own. 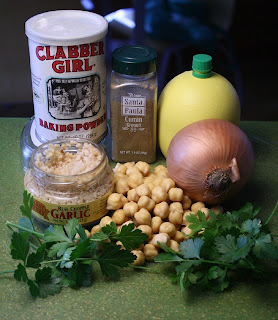 Ingredients for Falafel (about 20 small falafel balls, enough for 4-5 sandwiches)

Ingredients for Cucumber, Yogurt and Honey Relish (or dip) 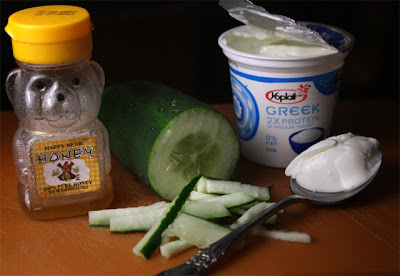 Directions for Cucumber, Yogurt and Honey Relish
Slice 1/2 of a cucumber into thin coins. Stack a few coins at a time then slice them into thin strips. Repeat stacking and slicing cucumber coins until done. 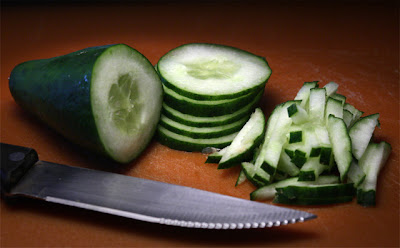 Add yogurt, julienned cucumber and one tablespoon of honey (or favorite sweetener) into a bowl. Mix well and set in refrigerator until falafels are cooked. Cucumbers tend to sweat out some liquid - so just before serving you may have to pour out the liquid that settles into pockets across the top of the dip. Give it quick stir and serve. 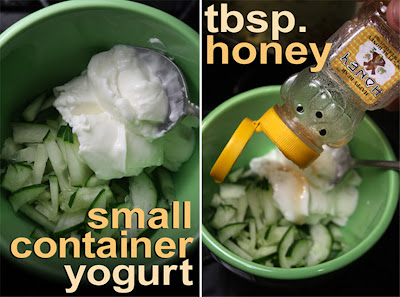 Directions for Falafel
Soak 1 cup of dried garbanzo beans in about 3 cups of water overnight (about 8 - 12 hours). Chickpeas should double in size when ready - so you get about 2 cups of soft beans when plumped up. Drain and add to a large bowl. 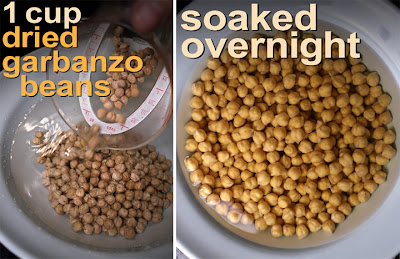 Roughly chop 1/2 bunch of parsley. You have leeway here. I've seen recipes range from calling for at least few sprigs, to much more. Chop onion into small enough chunks to fit into a blender or food processor. 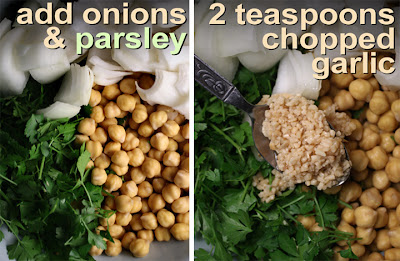 Add parsley, onions and chopped garlic to the bowl of drained garbanzo beans. Next, pour in a tablespoon of lemon juice, and sprinkle on a tablespoon of baking powder. Salt and pepper to taste - optional. Mix ingredients well.

Into a blender or food processor, add falafel mixture in small batches. Pulse the mixer until you get the consistency of damp oatmeal -- roughly chopped, but not pureed like peanut butter.

Empty processed falafel mixture to a bowl and repeat until all the garbanzo bean mixture is finely chopped. (You can make the mixture ahead of time and keep it in the refrigerator, until you are ready to form the falafel balls for frying.) 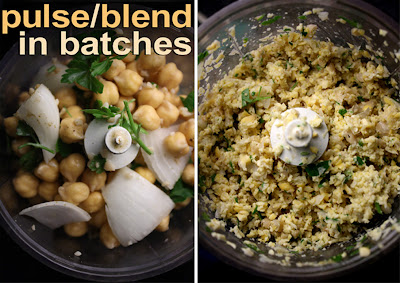 Now it's time to fry the falafel balls. Add 2 cups of oil to a pan or pot over a medium heat. If you have a deep fryer you can use that. You will fry them in batches, depending how large your pan is. I make the falafels tablespoon-sized. Just scoop up a heaping spoonful and pat it lightly on the tablespoon -- to form a roundish disc. Using your fingers, gently slide off falafel ball into the oil. Be careful adding the first falafel balls, as oil may splatter. 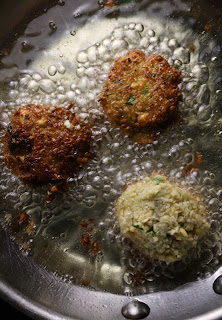 Some of the falafel balls may break, but that's okay, you will get better at it the more times you slide them into the oil. They are delicate, but will hold together fine once one side browns. Watch the falafel edges along the bottom and look for a nice brown crust edge to form. It only takes a couple of minutes for each side to brown. (If you are having too much trouble with breaking falafel balls, try refrigerating the falafel mixture for a few hours first, to firm it all up.)

Gently turn falafel ball over. I used a fork (or thin spatula) to loosen the falafel from the pan, and a butter knife, or spoon, to help flip them over. At this point you can let the falafel ball stay round for a moist and soft center, or you can press them down a little bit, to cook them all the way through. It's up to you how well done you like them. 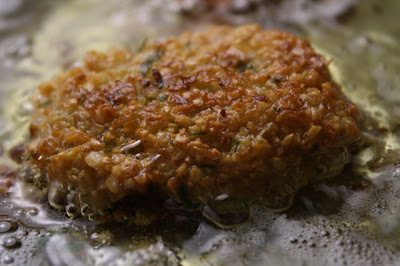 Brown each side. You are looking for a dark, almost chocolate brown, but be careful not to burn them. Once they are browning you can turn them over a few times to reach desired color. When done, set aside on a rack with paper towels to drain.

Now you're ready to assemble a Falafel Pita Sandwich. I like to microwave a round of pita bread for a few seconds, so it slices and opens easily (you can also heat it in a toaster for a minute.) Slice a pita bread in half and scoop in some Cucumber, Yogurt and Honey Relish, then load in some falafel balls - I got about three falafels per pita. Be careful with the first bite, as the falafel balls retain their heat! 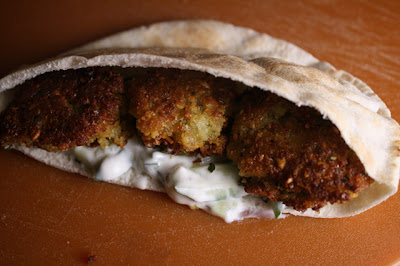 Hindsight
For my recipe research, I noticed that a couple of teaspoons of flour is a common ingredient, but I left it out. Maybe it helps hold the orbs together, but I didn't want the flour flavor this time  -- you could add it to help bind the falafels and keep them from breaking up, if you want to. Another interesting ingredient left out was the minty cool herb, cilantro. I would definitely try this next time, but thought, for my first foray, it might overpower the lighter parsley taste.

You could also make the falafel orbs larger than a tablespoon; say twice as big -- golf ball sized. Use an ice cream scooper to size them, or a large serving spoon. Refrigerating the falafel mix for a few hours first, will help hold them together when forming larger balls for frying.

For convenience, a couple of cups of drained canned garbanzo, or chickpeas, can be used in this recipe. But you'll lose some of the nutty texture and flavor of more solid, fresh soaked, garbanzo beans. Canned beans are mushier, but almost taste the same. It also takes less blending time, as canned beans are fully cooked through. As mentioned above, one of my commenters roasted canned cooked garbanzos to firm them up (about 15 minutes at 350 degrees?) 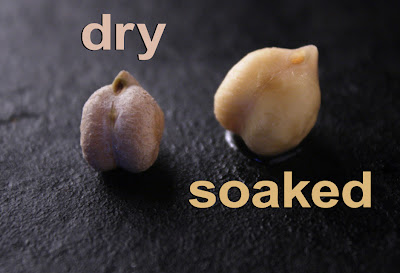 When frying the falafels some ground garbanzo pieces will break off into the oil, so have a spoon (slotted is best) to fish out the blackening pieces each time you add a new batch of falafel discs. Add frying oil as needed. You won't need to add extra if you have a deep fryer -- I kept the oil about an inch deep during the cooking. 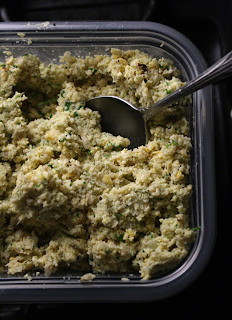 You could try a less oily version by baking the formed falafels in the oven -- 350 degrees until browned and done, about 20 - 30 minutes. But, of course, frying is the best way to go -- it's like comparing French fries to baked fries.

I originally made this recipe with 2 cups of dried garbanzo beans and ended up with a large tubful of ground falafel mixture -- enough to feed a party! So the recipe above is half of my original tryout. I'm sure you could freeze any leftover mixture, or just keep it in the refrigerator for a few days to cook up later.

A great thing about fried falafels is they heat up in the microwave quickly. It only takes 10 - 15 seconds to bring them back to steaming hot. But do be careful with your first bite -- as these orbs are excellent heat conductors. To keep the extra crunchy exterior you can bake at 350 degrees for about 5 minutes to reheat.
Posted by 99 Cent Chef at 12:54 AM

looks delicious! question - where WOULD you recommend getting falafel in little armenia? i'm closeby but never go b/c my husband's vegetarian...

hi Lynn, have you been to Falafel Arax on Santa Monica, east of Hwy. Fwy? I have a link of J. Gold's review -- Arax is featured in my latest Restaurant Nocturnes, Sandwich Edition, from last week. It's just a mini-mall joint, but well liked. The review link is after the video.

I made these tonight and they were very good. I only had canned chickpeas, so I roasted them until they were some what dried out and chewy. When I ground them they almost had a flour like consistency...were nut like and what I'd expect the soaked dry peas to be. I made the yogurt relish too, so delicious with falafel.

I like your roasting (or drying) of canned chickpeas, Dinahsoar, otherwise they would be very mushy ;-p

This sounds delicious and thanks Dinahsoar for posting about using canned chickpeas as I don't know of any local business that has dried ones.

Falafel sandwich is a popular recipe from Middle East, consists of chickpeas that are shaped into patties.

Do you think these could be frozen after being cooked?

hi Shara, I'm sure they would freeze fine and reheat...maybe not as cruchy?