These are cartoons made way before the computer generated style came into favor. Jerry Beck, who put together the show, is the most knowledgeable cartoon scholar around (yeah, imagine that - what a talent, huh?) Here's his website called Cartoon Research, and click here to read a bit about him. He's asked to put together cartoon screenings all the time around LA and I try to see them all.

I worked with animators a lot and have picked up a few tricks, as you can see by my stop motion animated recipe videos. Even some big name film directors have come from animation, like Frank Tashlin, who directed some early Jerry Lewis and Dean Martin films, and Tashlin even mentored Jerry Lewis on how to direct movies during their multi-film collaboration.(Presently, there's Pixar's Brad Bird with Ratatouille and The Incredibles under his belt, who directed Mission Impossible - Ghost Protocol.)

As you can see I like the offbeat movie experience. I don't see many new ones, but fortunately Los Angeles has a handful of movie screens that show my type of film. If there is a Film Noir double bill, I'm there. I like a 1920's creepy flick with Lon Chaney, or even the original Wolf Man with Lon Chaney Jr. I could go on and on listing my type of flick - just click on the following theater names to see their film listings: The Bing Theater at LACMA, Billy Wilder Theater at the Hammer Museum, American Cinematheque at the Aero and the Egyptian, and perhaps my favorite and certainly the most eclectically programmed, Cinefamily at the Silent Movie Theater.

On Sunday I started a stop motion version of my Mom's Jambalaya recipe. I got most of it shot and am now making all the video clips for final assembly. You can click here to see the original video that features my Mom. She's turning 80 in a couple of weeks - and she's still cooking!

Right after I finished animating the food, I went to the New Beverly theater (schedule here) in Hollywood. It was taken over a few years ago by always controversial movie Director Quentin Tarantino. The theater runs older films, everything from 1940's Screwball comedies by Preston Sturges to Stanley Kubrick films, and classic French New Wave to Grindhouse exploitation.

While Tarantino ownes the theater, he hasn't programmed the film schedule, until this month. I wanted to see what he would come up with so I've gone a couple of times so far. And I haven't been disappointed.

Quentin is quite the film scholar who's taste runs the gamut. And because he worked in a video rental store, his taste is high to lowbrow, from Kung Fu flicks to old school cowboy Westerns, and to the most obscure Italian crime drama. 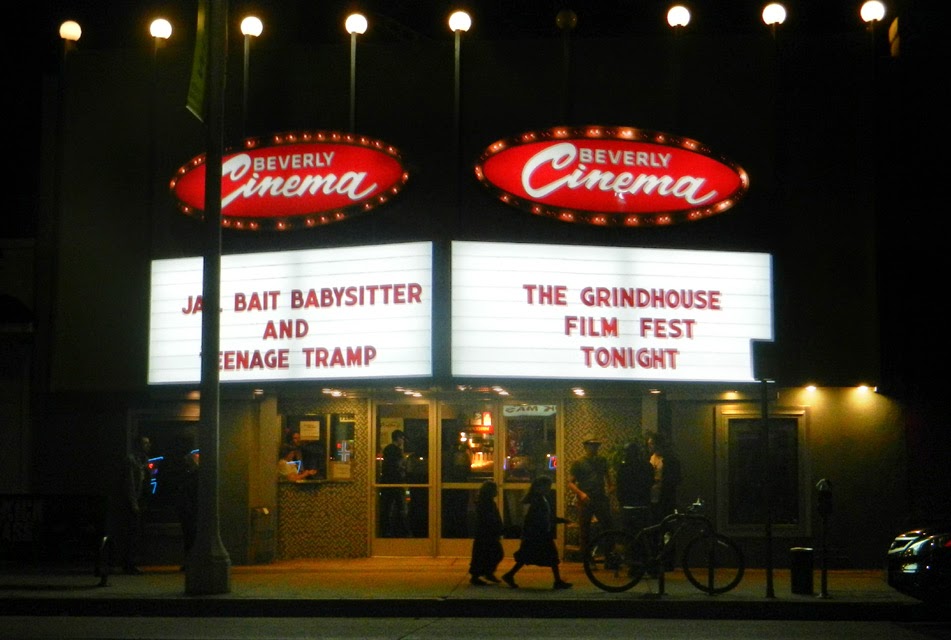 I've always enjoyed the New Beverly theater (here is an interesting historical timeline.) But a bit of controversy is surrounding the rechristening of the place since Quentin has taken over the programming. First he got rid of a new digital projector - only film will be show now. And there have been unfortunate personnel changes, read about some of it here.

But it should be an interesting next few months of film programs. Next up for me is the weekly Tuesday night Grindhouse with a Kung Fu double bill featuring a very young Jackie Chan: Snake in Monkey's Shadow and Snake in Eagle's Shadow.

Oh, and Mom's Jambalaya turned out great, and the stop motion animated footage I shot looks delicious.
Posted by 99 Cent Chef at 9:26 PM

Billy! I LOVE your blog soooo much. The recipes are fabulous and I also love reading about the places you visit in our L.A. Keep up the great work! Hugs!