This Nocturnal Nosher is back to his old street photography habits. For the last month I've been revisiting past Nocturne videos, as well as shooting new footage for another Restaurant Nocturnes. 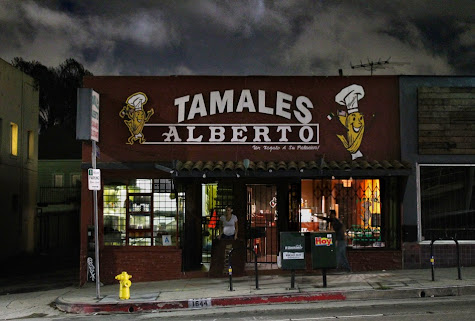 The tamales here are fantastic, so moist and loaded with filling, cheap too.

It's been over a year since I've assembled a fresh one. If you are unfamiliar with my photo/video series, it's basically a short video of a restaurant facade taken at night (when everything looks cool and mysterious,) that I then add audio of some menu highlights. Just click here to see the last one I created, Restaurant Nocturnes XIII.

Some new Restaurant Nocturnes are coming soon, including 2 from ABC host of The Taste, Ludo Lefebvre: Trois Mec and Petite Trois. For being a sex symbol to all the female foodies out there (and some males, too) Top Chef Ludo's restaurant exteriors are decidedly unromantic. Trois Mec has no up-to-date billboard; only the original Raffallo's Pzza (sic) signage and an "OPEN" arrow. Just go to the address and walk in, that is, if you have a reservation that must be made two weeks ahead! And you cannot cancel the reservation either, not that you want to bailout of the hottest restaurant destination in town.

When I first started the series 6 years ago, I really crammed-in too much, almost 25 eateries per video! To keep the video around 7 minutes, I barely had 15 seconds to spend on each one. That meant a truncated audio of the menu selects. Well those days are over. Now, I'm dedicating plenty of time for you to hear the luscious entrees of each restaurant. What's the rush anyway? I think it had to do with being too attached to the photo/video side of this series, and giving the audio short shrift.

Well, it exciting getting back into nighttime photography. There has been a lot of new dining destinations over the last year. I don't know how the average foodie blogger and newspaper restaurant reviewer keeps up with the LA food scene. I manage to keep my whisk in it - not too deep, but if you hang out here, you'll get a nice thumbnail of night noshing around town.

Of course, it's not all about the latest, hippest, or most talked about hot spot. A Top 9 Nocturne for me is not even open any more; it was called Soul Burgers.

Located right across from the Hollywood Park Racetrack (also since closed) in an Inglewood strip mall. These really were some of the best burgers in town. So unusual too -- who would believe you could dress a burger with cooked collard greens, pureed yams and turkey dressing, and it would be that dang good. But tasting is believing. When you bite into a James Brown Soul Burger your taste buds will shout and do the splits! Just listen in as Chef Toni testifies (she's the owner and a former Barry White backup singer) -- you'll become a turkey burger believer. What I like most about this Restaurant Nocturne is Chef Toni's enthusiastically entertaining menu description - just watch it below, with your computer speaker volume turned way up.

I'm working on Restaurant Nocturne XIV over the Christmas holidays, so do check back for the most unique and cool nighttime food series around.