"Spam, spam, spam, spam...."and repeat, so goes the Monty Python song. I was a big fan of Monty Python as a teen, not so of canned meat Spam. But I'm willing to change my mind. So read on to see what I rate a Spam Musubi from a 7-Eleven market on the island of Oahu, for my latest Cheap$kate Dining Review, Hawaiian-style.

Spam Musubi is a Hawaiian mashup of Japanese cuisine and American canned meat, shaped into a fast food origami. There is nothing like it. Typical Japanese Musubi is any meat or veggie on a Twinkie-shaped mound of steamed sticky white rice and wrapped in a black band of dried seaweed (called Nori.) 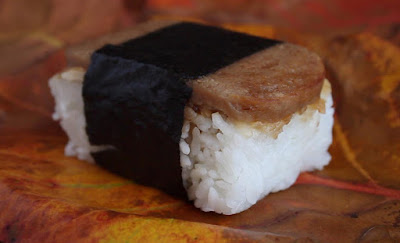 Hawaiians of Japanese descent quickly took to Spam. It was a WWII necessity when meat and other rations were scarce. But with the import of American GI's to Pearl Harbor, Spam was the most available meat product on the island. Back in the day it was a necessary novelty, and was quickly adapted by the locals. 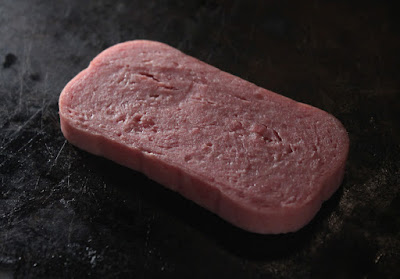 They say our military travels on it's stomach, well just go around the world and you will find Spam integrated into many foreign cuisines, like: British, German, Japanese and Korean. 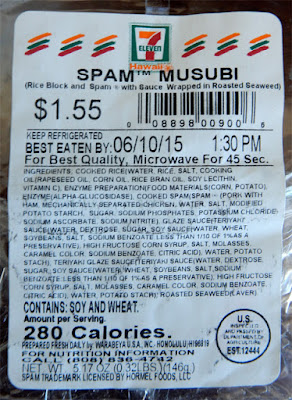 Spam is made with very few ingredients really, mainly ground pork shoulder, ham,  salt, water, potato starch (to keep the meat moist), sugar and sodium nitrite (a  preservative). And now you can buy it with many flavors, and even Lite (which has chicken,) that's low fat and sodium. However, now they doctor it up with marinades and extra flavors, so the ingredient list can be quite long.

The name's origin remains a mystery, but it's thought to be an abbreviation of 'spiced ham,' or maybe acronym for 'shoulders of pork and ham.'"

If you have been here before then you know I'm in the middle of a Hawaiian Travelogue series, that started last month. So I had to eventually get to a cheap fast food Deal of the Day.

Go to any grocery or liquor store with a deli station and you'll find a row of plastic wrapped Spam Musubi under a heating lamp. And they are cheap, just the way I like it. They cost anywhere from just under $2 and more, mine was $1.55 at the 7-Eleven Store.

The locals go for Spam Musubi like Mainlanders getting a hot dog at the local gas station/market. It's a perfect few bites when you want a quick snack for the road. You can even find Spam integrated into McDonald's menu. 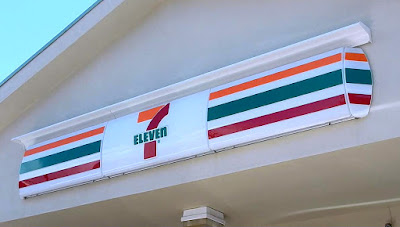 They sell many types of Spam Musubi, some flavored with teriyaki sauce. I got a regular one. 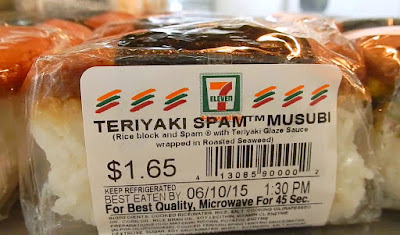 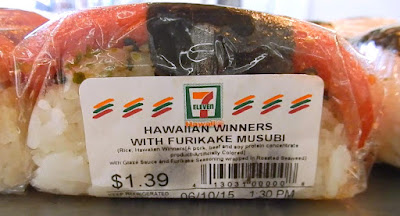 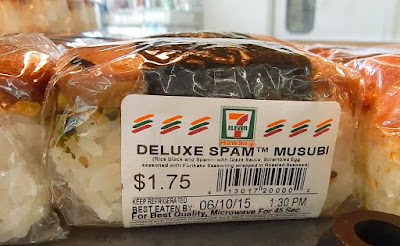 What is unpredictable is how long they have been sitting under the heating lamp, so that can affect the texture of cooked Spam and the moisture of sticky rice. So my rating may be off a couple of points either way -- so take it with a grain of salt.

I unwrapped the Spam Musubi and could tell it had been under the heating lamp for quite a while. But Spam was made to stand up to any cooking abuse.

It was warm to the bite and the Spam was very salty (as it should be.) The meat texture was a little rubbery, but still flavorful. It's like eating a thick piece of heated luncheon meat. Not something I would eat very often, but okay.

The rice held together fine. It's just plain steamed white rice, mainly for extra carbs. The band of dried seaweed had a slight ocean seafood flavor. 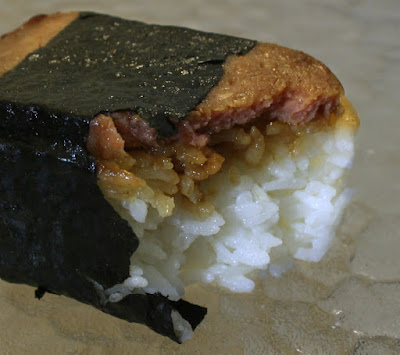 Overall it is a good mix of blandness and meaty flavor. I finished the Spam Musubi in just a few bites.

So on my Cheap$kate Dining Scale of 1 to 9, 9 being best, I give 7-Eleven's plain Spam Musubi a....6! This Deal of the Day may not be for everyone, but if you've been booggie boarding in the ocean all morning this will satisfy until you get a real meal.

Very good write-up. I certainly love this website. Thanks!
Does 7 11 Sell Stamps

Pretty good review, the way I see it. As a writer, I found it interesting.