The reviews are in! In my last Hawai'i Travelogue it's a 2fer, not only does the cheapest restaurant reviewer put his 2 cents worth in, but the wife gives a review as well. You don't want to scroll past this video.

And along with cheap$kate eatery reviewing, I assemble a bunch of scenic shots of Waikiki Beach to close out our Hawai'i travels. It's a feast for the eyes and taste buds. 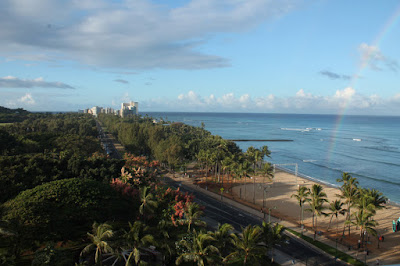 If you have been following us on this trip then you were exposed to Spam Musubi in an earlier video (a click away here.) Well, I kick it up a notch with a couple of Breakfast Musubi. 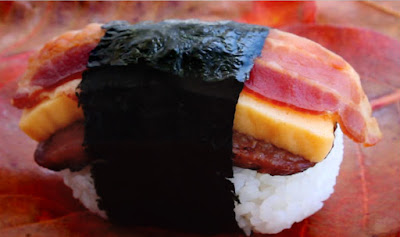 The addition of Spam to Japanese musubi is unique to Hawai'i. It came about during WWII when meat was scarce and canned Spam was abundant. Locals adapted and created recipes for this military tinned processed meat. 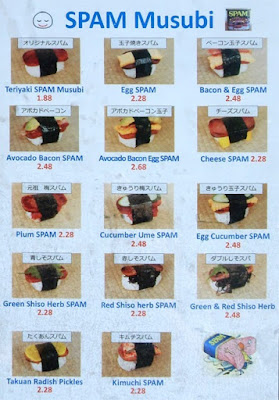 Spam Musubi is just Japanese-style sticky rice with a slab of fried marinated spam on top, wrapped with a band of dried seaweed; and about the size of a Twinkie. I know, not appetizing sounding. But don't knock it until you've tried it. This is what the locals get when they are on the run looking for a quick bite. Spam Musubi is carried in grocery stores with a heated deli case, liquor stores, and 7 Elevens.

I know Japanese musubi has many more topping than just Spam (I've visited Little Tokyo many times, here in Los Angeles.) Well, about 4 short blocks away from our Waikiki hotel was one of the most well known eateries serving musubi on the island, called Musubi Cafe Iyasume. 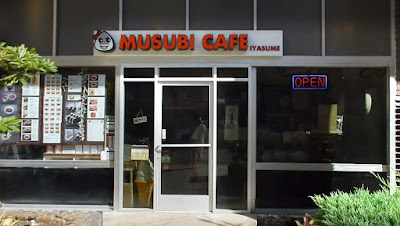 It's a bright and a well laid out petit restaurant. While they serve all types of toppings for musubi, they also have prepared bento box lunches to go for the locals, like: Curry Bowls, Pork Katsu and Shrimp Doria for $5.

And the variety of musubi are almost endless: avocado, cucumber, plum, herb, pickled radish, teriyaki, cheese, bacon, and an egg omelet. You will get an eyeful of musubi in the video at the end of this blog post. 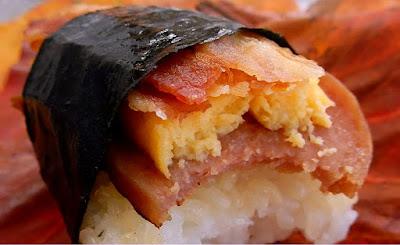 You never know what you'll run across on an oceanside stroll. One eventful late afternoon we (along with our friend Sandra) ran into a music and dance performance of classic Hawaiian songs and Hula dancing. Just a lei toss away from the crashing surf, we found a grassy spot and fell under the sway, rhythm and melody of this beautify island.

It gets crowded along the main drag of Kalakaua Avenue that follows the coastline. It's best to make reservations to eat on a night out, as we found out one evening. Being bumped from one eatery to the next, we finally lucked out and landed in Duke's Restaurant.

While it's a popular tourist type place, with tiki designed trappings, it turned out being a great find. Duke's is named after the surfing legend Duke Kahanamoku. You can read some highlights of his storied life by clicking here. 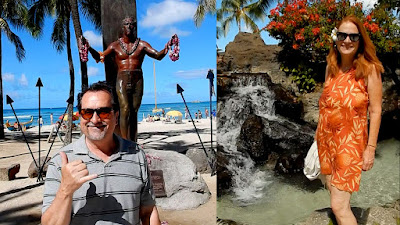 While it's a chain restaurant, it manages to hit a sweet spot with a large tropical drink selection and Hawaiian influenced cuisine. We were ushered to a small table with a sliver-view of the beach. We ordered drinks and settled on Fried Calamari and Ahi Poke appetizers for a light meal. 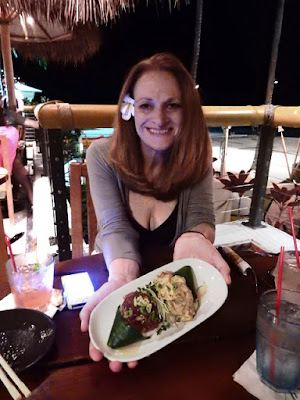 The Poke was bright dice-sized cubes of marinated raw fish, while the Fried Calamari was tender and crunchy at the same time. It was a good seafood combination. I had a drink called Hawaiian Time made with Absolut Mandarin, Kai Lemongrass, Ginger Shochu, basil strawberry, lemonade and club soda - whew, that was a refreshing mouthful.

Amy was on a ginger kick and ordered the Maui Mule, made with Pau Vodka, simple syrup, lime and ginger beer.

As we sipped libations, right next to us a troubadour took a stool at the microphone and began strumming tunes. He had a high sweet voice and was a genial host, taking requests during his set. Amy fell under his spell when he played Van Morrison's song, Moondance, one of her favorites. Of course, he also plucked out a few Hawaiian melodies. I can never get enough of this style of music (I always try to find a local radio station that plays traditional Hawaiian music.) It creates the right mood for long drives between scenic stops.

We couldn't have asked for a better date night out: music, tasty treats and being in the company of someone you love. We had one last moonlight stroll before heading back to our hotel. 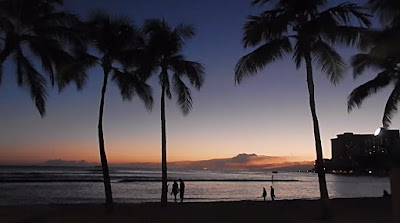 So thanks for hanging out these last two months on the island of O'ahu with Amy and I. I feel lucky to have such a fun and lively companion to share vacation time with. So do check out my last Hawai'i Travelogue Video below -- aloha and bon appetit to all.

99 thanks to:
Musubi Cafe Iyasume (There are several locations, this is the one I went to.)
2427 Kuhio Avenue,
Pacific Monarch Hotel Ground Floor
Honolulu, HI 96815
Email: www.tonsuke.com/eomusubiya

A great Hawaiian radio station that I dived into to select a few tropical tunes for my Travelogue videos called "Territorial Airwaves - Your Source for the History of Hawaiian Music."
Online at: www.territorialairwaves.com

And, last but not least, 99 Thanks to my lovely travel companion Amy -- we make great memories together ;-p

Great video! You are so blessed to have a travel companion that you love to taste test stuff with you! I would definitely have to have the lowest sodium spam...the saltiness of the regular spam just overpowers everything imo...

This is so tasty. Thanks for share with us recipe. I also like Adobo Fried Rice Spam Musubi. Please try it.