You never know what edibles you'll find at the local 99c only Store - everything from a package of Chia Seeds to a large container of frozen Chicken Livers. And here are some of the best, or at least, the most unusual Food Finds of 2015 that I've run across. 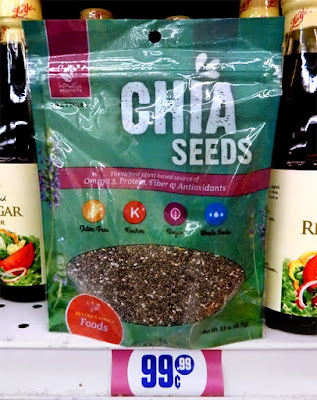 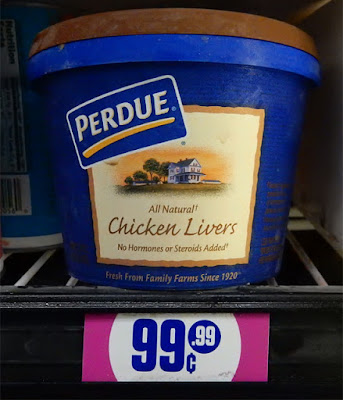 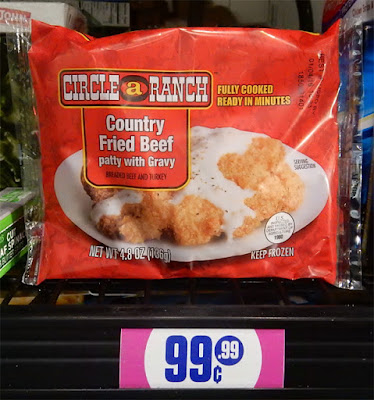 Even seaweed snacks have made an appearance. You know what they are right? They are super thin sheets of dried seaweed - they dissolve in your mouth like  the host given to Catholics during the Eucharist - or those sheets of breath mints. 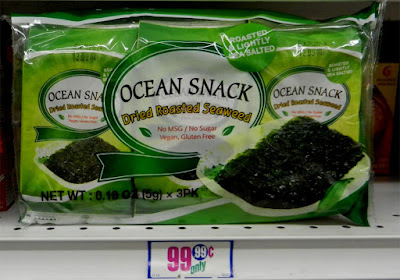 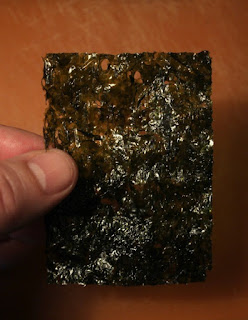 As a joke I gave out some to Halloween trick or treaters. Well, I had a fight on my hands when a group of teenage tricksters actually shoved at each other to get a package! I guess dried seaweed snacks have been discovered by the next generation, and good for them.

While this Mole may not taste like homemade to transplanted Oaxacans, you can't beat the price. Mole is a complex blend of spices and chilies, really too complex for the average cook to make. I found small boxes of it, and it tastes fine, especially paired with a nice fillet of chicken. 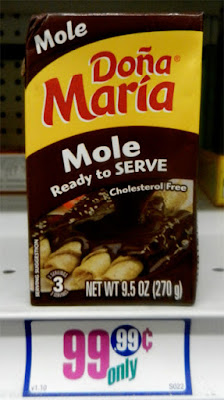 They also sell plantains ready to ripen for sweet fried bananas. I've made them to accompany my Cuban recipes, like tender Roast Pork and Black Beans. I also see peeled and frozen packages of Yucca, a potato-like starch that Central Americans go for.

Whole pomegranates appeal to Middle Eastern tastes buds. I like the sour/sweet pulp. Inside the cardboard hard shells there are tiny fruit lozenges with seeds, and you eat the bright red flesh with seeds - quite tasty. I made an cute video with my neighbor Bob's 4 year old daughter, Lola, where we try to get her to eat some. You can see it here. 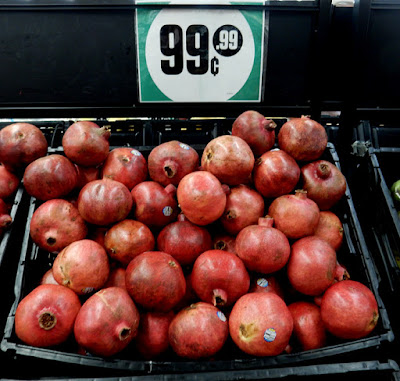 My go-to drink of choice is Diet Cran-Pomegranate by Ocean Spray made with real fruit juice. They have carried it here for the last few years. After work I sometimes add it to a shot of gin over ice. 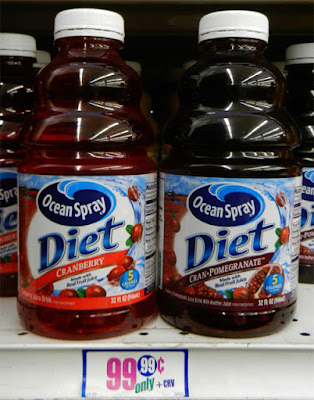 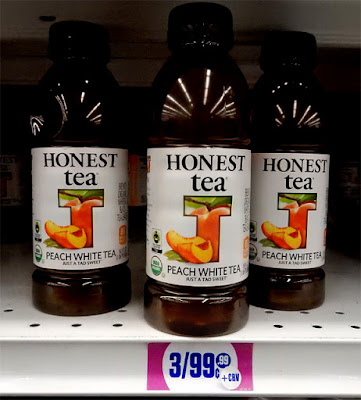 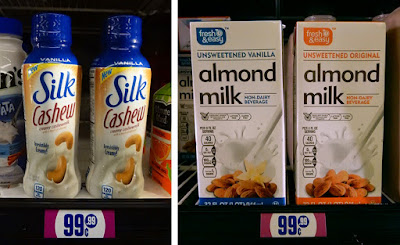 My beer of choice are 16 ounce cans of Henninger Beer from Germany. They don't carry it all the time and I always stock up when they do. It's a light crisp pale lager that goes down easy. I found another refreshing beer on sale once called Chang, from Thailand. 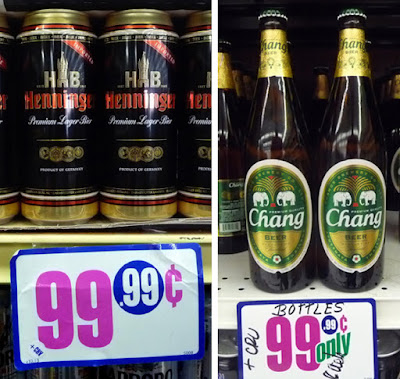 I've lucked out a few times with the frozen fare that comes in. I liked the Veggie Lasagna from Stouffer's and a Whole Grain Pilaf from Luvo. While the servings are small, the quality and taste are superior. 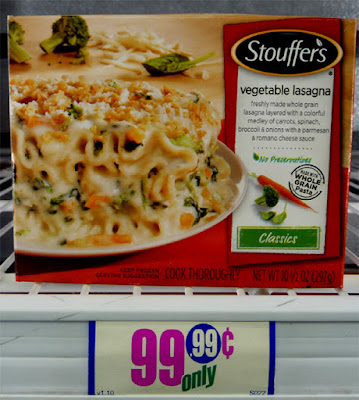 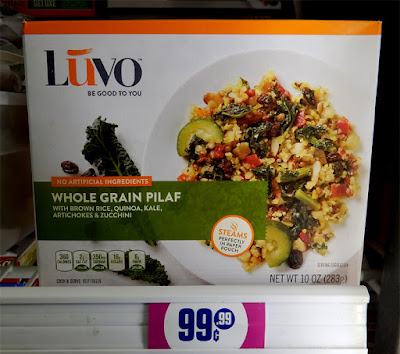 And there are always cans and jars of premade pasta sauce. 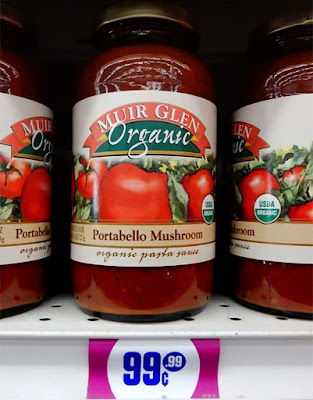 The hot sauce du jour is Sriracha, originally bottled in nearby Irwindale. Huy Fong Foods did not copyright the name so the Sriracha lable and flavor is turning up everywhere, like in ketchup and mayo. 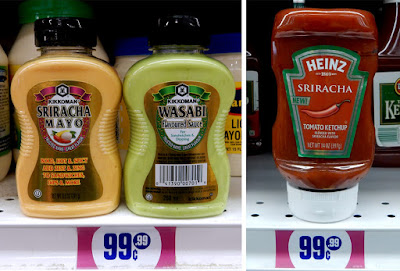 99c only Stores offer a wide variety of fresh fruit and veggies, sometimes it's even organic. You can pick up packages of tomatoes, potatoes, mushrooms, lettuce and onions. 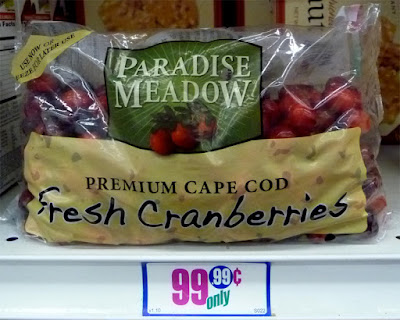 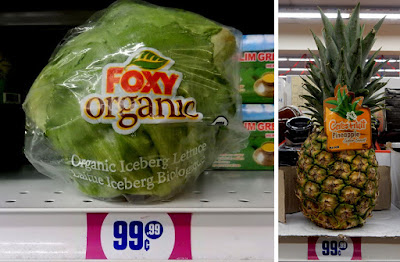 As for fruit, how about whole pineapples for 99.99 cents! They even carry coconuts - good luck cracking them, though. I usually settle for Coconut Chips. 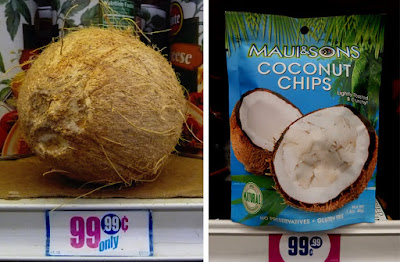 Now don't rush out to your local 99c only Stores hoping to find all of the above. The preferred stock that comes through, often goes right out the door quickly, so that's it. When I find a great deal I stock up -- shopping there keeps you on your toes!

I hope you have had a year of bargains, too. Just stick with me and I'll keep pointing out all the money saving food items, that make up my cheap$kate recipes, I find this coming New Year!

hi 0623 when you are in a 99c only Store you have to do impulse shopping, as many items disappear by the end of the day!