Unfortunately this Deal of the Day is bleh. I mean it's not bad, just mediocre. And that goes for both Atkins Stone Fired Pepperoni and Cheese Pizza. 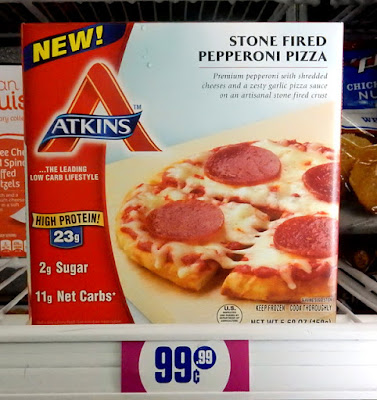 I know it's hard to find a tasty frozen pizza for a buck. One day I'll find what I'm looking for, just not yet.

I first tried the Stone Fired Pepperoni Pizza. This one had 3 slices of pepperoni, not four slices shown on the box cover - better supervision is needed at the Atkins pizza plant. 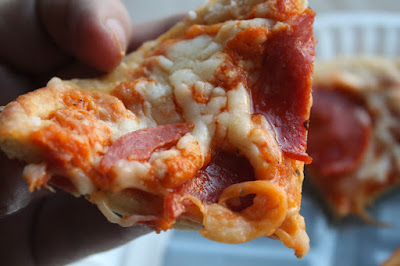 I thought the pepperoni slices were fine. Thin but spicy and pungent just like pepperoni should be. 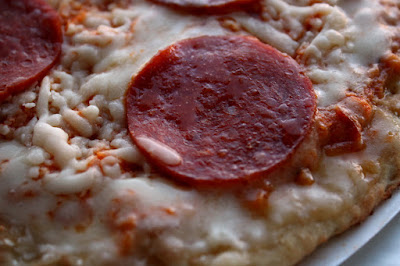 And the cheese was flavorful with mozzarella and parmesan. Like I said earlier, it could have used more.

And finally, the pizza crust is medium thick and blistered. I prefer thin, but the dough is tasty enough -- Chicago and New York-style crusts have nothing to worry about here. 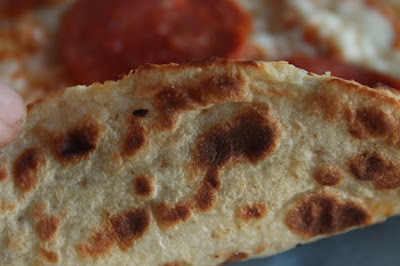 So on the 99 Cent Chef's Cheap$kate Dining Scale of 1 to 9, 9 being best, I give Atkins Stone Fired Pepperoni Pizza a 4!

So on to the next Deal of the Day, Atkins Stone Fired Cheese Pizza.

Now, this is more like it. This pizza has plenty of melty, gooey cheese, just the way I like it! It still has too little sauce, but the cheese amount almost makes up for it. 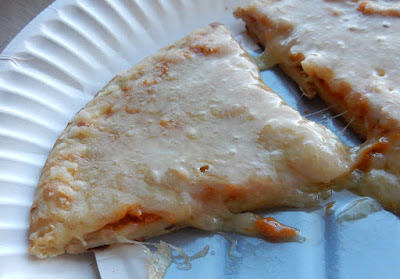 While not the most flavorful mozzarella and parmesan, it's fine.  I think an extra shaving or two of parmesan cheese would do the trick.

And it has the same crust. I tried frying this frozen pizza on a George Forman-like grill for a better crust, but due to the thick dough it still did not crisp up enough, before the cheese started melting all over the place, and the too little tomato sauce almost evaporated away. 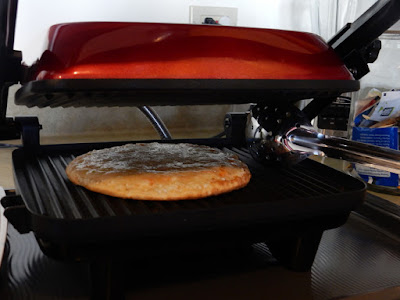 The ingredient list is too long for both pizzas, but that could be preservatives in the pepperoni and cheeses. 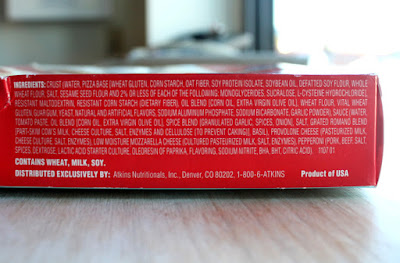 So on the 99 Cent Chef's Cheap$kate Dining Scale of 1 to 9, 9 being best, I give Atkins Stone Fired Cheese Pizza a 6 ! It's a little better than bleh.

While I shouldn't complain too much for single serving pizzas for a buck, I would recommend the Cheese Pizza over the Pepperoni.

Overall these are not bad Deals of the Day, just a bit underwhelming. Oh well, you can't have it all.
Posted by 99 Cent Chef at 1:02 AM