I've died and gone to Donut Heaven this summer. From the Donut Man to my local donut shop, DK's, in Santa Monica, I've been indulging a lot lately.

For a couple of summer months my fave donut is from Donut Man, and my kind neighbor drives out to Glendora once a year to bring back a few boxes. I always get 3 Peach Donuts.

And each donut is huge, loaded with fresh peeled and sliced peaches. At $4.50 per donut, these are not cheap, but each one weights 3/4 of a pound and last time I counted there were 10 peach slices per donut. And the pastry donut part is humongous as well.

The pastry is a yeast-style, so it's light, airy and has a sweet sugar glaze.

For a neighborhood dunker I've been going to DK's Donuts in Santa Monica lately. It's on the way to my favorite movie house, the Aero, so I've been known to make a late night stop.

They are located in a mini-mall of course, and in the alley behind the store is an angel wings/donut halo mural pictured at top of this blog post. So go there for your own halo selfie. 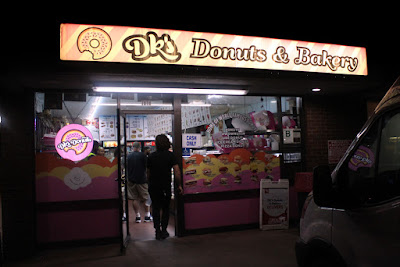 And they have the most unique donut around, the Original Ube Purple Yam Donut. It looks unusual, but really tastes like any regular donut.

It's a heavy cake donut and sweet. The purple color is from a Japanese yam, but the donut doesn't taste like a yam, really. Most of DK's donuts are about $3 each.

But the prettiest donut in town is right there as well, an Edible Flower Donut, made with an orchid flower. 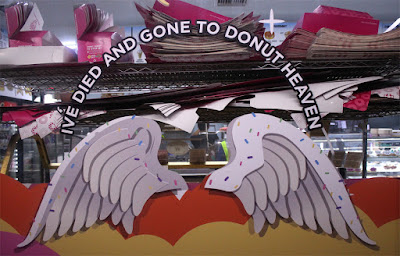