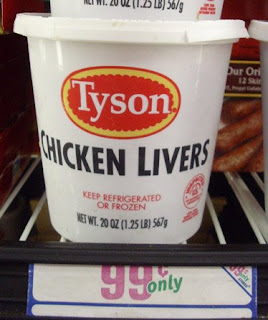 1 1/2 pound frozen containers of Tyson Chicken Livers are showing up at the 99c only Stores.
One of the first jobs the Chef had in Hollywood was video editing. The owner was from Japan, so the Chef was lucky to be squired around to every Japanese dining establishment in town; from highend sushi bars to yakitori hideaways in Little Tokyo. Walking into a yakitori room is similar to entering a South Central bbq joint, you are hit with the smell of smoke -- you are in the presence of grill masters. 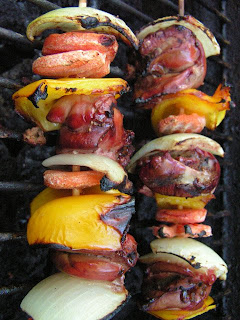 While southern bbq is slow cooked, yakitori is quickly grilled over an open flame. Like a sushi bar, you order individual skewers of chicken offal or meat and vegetables, which quickly arrive lightly charred and perfectly done. In the Chef's version he uses his handy outdoor bbq gas grill. The chicken livers are combined with vegetables like a shish kebab and basted with an oriental sauce. 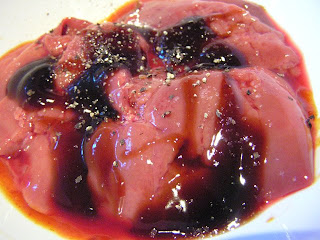 Ingredients for 2 skewers
8 chicken livers (about 4 per skewer.)
Chopped vegetables: onion, bell pepper, carrots or whatever you have on hand, salt & pepper to taste.
Sauce
3/4 cup total of oyster sauce, sweet & sour, plum sauce or any combination. 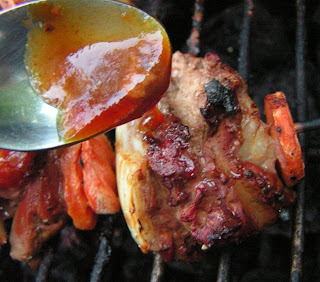 Directions
Drain the chicken livers and mix with1/4 cup of your favorite oriental sauce. Chop vegetables in large chunks. Skewer alternately, veggies then chicken livers, making sure both parts of the chicken liver are piecered (the liver is delicate so try not to rip.) Salt and pepper to taste. Place skewers on a hot grill. Because the liver flavor is so intense, use plenty of sauce on the liver during cooking. The trickiest part of grilling liver yakitori is it may stick to the grill; use a knife between the grill and liver to gently loosen before turning.
Posted by 99 Cent Chef at 1:10 AM

I'd love to know which of the many 99 cent stores in our great city are your favorites. I live by, and frequent, the Sunset Blvd. location in Silver Lake, and although I love it, I can't imagine it's the best.
Cheers!

Wow, a favorite 99 Cent Store,it's like choosing a favorite child, Georgia; but top on the list is the Wilshire/Fairfax and the La Tijera Blvd.(near the 405)stores - honorable mention goes to the LaBrea/Wiloughby. They get extra points for selling alcohol, I think your store does not carry booze, right? When I lived in Los Feliz I would go to that store all the time, it is a good one! There are a few 99 Cent Stores I have not tried , believe it or not, like the one on Alvarado, near Wilshire...one day.