Dumplings & Chicken - Deal of the Day 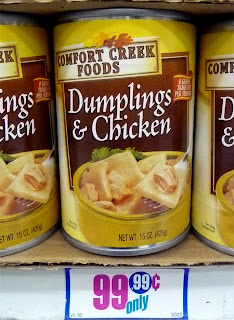 Southern comfort in a can is the latest Deal of the Day's offering. In the manner of Jewish Matzo Balls or Chinese Won Tons, Dumplings & Chicken by Comfort Creek Foods are tender dough slabs in a flavorful broth. At just 15 ounces, it's a hearty meal in a tin.

I'm always a bit wary of canned meals -- chile with beans is about the only canned dish that sometimes works. Soups are always lacking in veggies, meat and noddles (or rice.) I'll give Comfort Creek Foods credit for loading the can with fat dumplings and tender white meat chicken chunks.

I think the last time I had Chicken and Dumplings was sitting on my grandmothers lap and being spoon-fed as a 4 year old! And after putting away this loaded Deal of the Day you'll be ready for your nap. 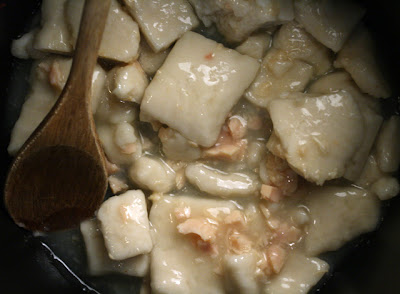 The dumplings are as large as poker chips and the chicken pieces actually match the size of the label photo. I could not detect any veggies in the gravy; some pieces of celery and onion would've been nice. And more chicken would have been even better -- I guess that's why it's labeled as "Dumplings & Chicken" not the more traditional "Chicken & Dumplings." 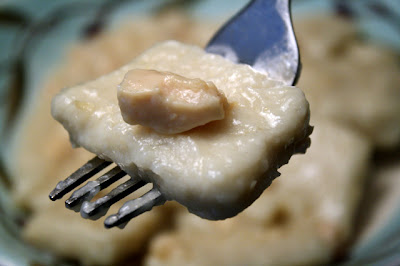 As for the gravy, it's awfully salty; while not quite a salt lick in a canister, it is a common problem with canned foodstuffs, so I'm not too surprised. And I would have liked more liquid or broth mixed into the gravy. When I heated it in a pot on the stove top, what little liquid there was almost cooked away. Maybe they should put somewhere on the label "add 1/4 cup of water". 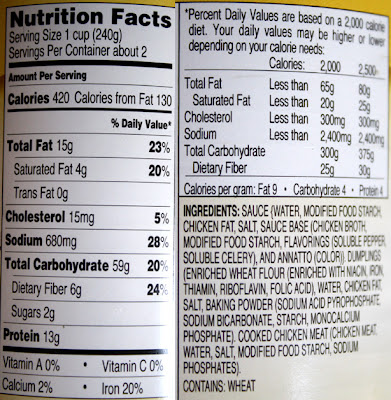 The dumplings themselves are firm but not too much so, and the taste is light and doughy, flavored by the chicken gravy.

I am currently a college student and I am constantly looking for great ways to save money while eating out. I found this awesome web and mobile site called SpecialsAgent that pulls together all the great offers, deals, new menu items, coupons... everything I need to save money. For all kinds of meal and occasions I've been able to save money with specialsagent.com. Check it out! :)