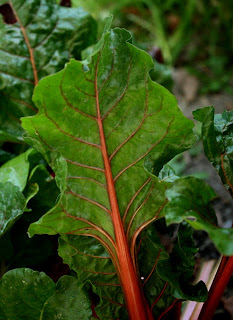 My garden Swiss chard plant is prolific this spring, and since it's colorful and nutrition loaded leaves are free for the picking, I'm adding it to my breakfast menu with a Swiss Chard and Cheese Omelet.

Swiss chard is milder than collard greens and cooks in a fraction of the time. It's not as delicate in flavor as spinach, and not as soggy -- so you get some texture in each bite. Even the brightly colored stems are tender and edible. Chard comes in a variety of colors, from all green to red stemmed, and even a red wine color for the whole plant.


I made a Breakfast Frittata (click here for recipe) last weekend and added a handful of sauteed chard. I've even added chard to my cheesy Baked Pasta with Cauliflower entree (video recipe, click here.) I usually roughly chop the leaves and give it a quick 2 minute saute in a teaspoon of olive oil to soften. You can substitute oil with a couple tablespoons of water and just cook a few minutes until leaves wilt and water cooks out. 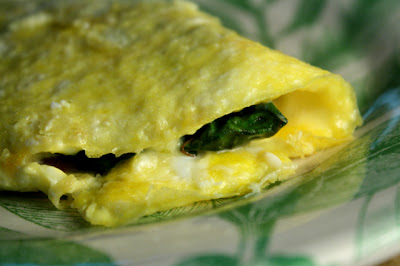 You could add the sauteed Swiss chard to a simple egg scramble, but I think it pairs with cheese for an interesting spin on the typical Diner breakfast Spinach Omelet. For this omelet I used 99c only Store shredded mozzarella cheese, but you could use any favorite. 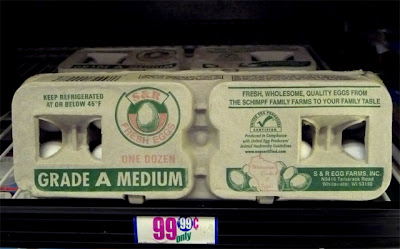 You can't get much cheaper than eggs as a main recipe ingredient. And you will use very little of more expensive cheese.

You can follow this recipe and make a regular spinach omelet -- or, to add some extra fresh flavor to your morning omelet, give The 99 Cent Chef's Swiss Chard and Cheese Omelet a go. 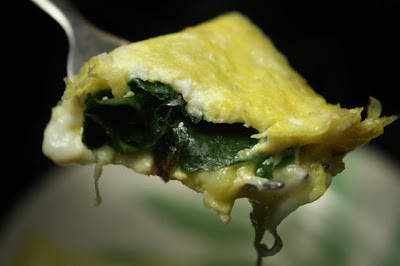 Ingredients (one omelet)
Directions
Wash and rinse a handful of Swiss Chard, then chop. Heat one teaspoon of oil in a pan and add chopped Swiss chard (or spinach.) Saute 2-3 minutes until soft and wilted. 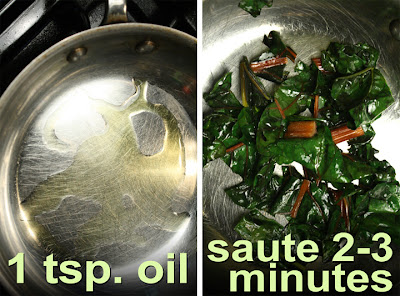 Meanwhile, whisk 2 eggs together in a small bowl for your omelet. I like to add a teaspoon of milk into the eggs -- make your egg omelet base any way you like it. 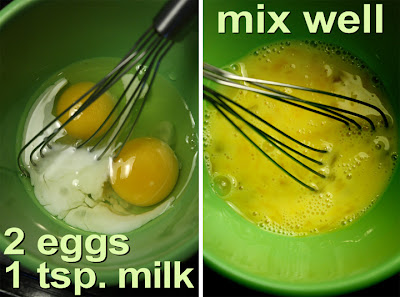 There are several ways to make an omelet. I've seen the fancy chef way: it's almost like making a soft egg scramble and rolling the egg over the filling, like you would fold a burrito. I do mine simple, just pour in the egg and let it cook a minute; add the fillings; cook until egg liquid it almost gone, then fold it in half. Sometimes it sticks and breaks and leaks -- most of the time it doesn't.

So first, into your favorite egg frying pan over a medium heat, add a teaspoon of oil. Swish oil around to coat the pan. Add egg mixture and allow to cook a minute. Next add the Swiss chard on one half of the omelet and cheese on the other side.

Let the egg cook until almost all the egg liquid is gone -- the omelet surface is glistening but still slightly damp, about 3 minutes. With a spatula loosen 1/2 of the omelet, then lift and fold -- cheese onto the chard side. Season with salt and pepper to taste (you can season anytime during cooking process.) Cook the omelet for another minute or so. You can make a small slice into the omelet to check for desired doneness.
Posted by 99 Cent Chef at 1:03 AM

We had chard frittatas just this morning. Buttery smooth and quite easy to grow in the garden. Keep up the good work!