The Frugal Fotog once again delves into nighttime noshing throughout L.A.in his new video, Restaurant Nocturnes X -- just a click away at the end of this post.

Via 13 carefully curated culinary stops, you'll be given a magic window into what happens every night in L.A. when night falls and the denizens come out to eat.  From au courant to old school, eateries from all over town are presented in short (15-second to 1-minute) video clips; while the restaurant folks themselves describe some of their preferred menu selects. But beware -- these intriguing descriptions may have you calling for a reservation before the video ends.

First up is Chez Jay, a T-Bone toss  from the beach in Santa Monica. For more than 50 years, this classic steak and seafood dive has invited locals to rub elbows with the elite. Everyone from Rat Packer Frank Sinatra and Beach Boy Dennis Wilson, to Sean Penn and Drew Barrymore, have whet their whistles here. Just squint your eyes in the late-night ambiance, and there's no telling who you may spy.

Next up is the latest from the Umami hamburger empire, Umamicatessan. A temple to bovine, poultry and swine, this downtown eatery serves everything from slices of ham imported from Italy and Spain to good old-fashioned Kentucky hams, along with their lauded hamburgers. They've come up with some of the most unusual uses of offal, too - how about Crispy Pig Ears with Brainaise? Yep - you read right, Brainaise is an aoli made with blended pig brains. In the mood for a luscious jelly doughnut filled with foie gras called a FG & J? You only have a few more days to try it, as California's ban on the selling and production of foie gras kicks in this Sunday.

If you're not in the market for a tossed brain salad, check out my clip of the classic burger joint Tommy's Hamburgers. There are many imitators (Tammy's, Tom's, Tomi's, et al.) but none hold a patty to the original. This was a royal pain in the arse to shoot, as the perfect angle is right in the middle of their parking lot -- and I was shooed away a half-dozen times before I got enough footage to make a decent video clip. Not much fun playing cat-and-mouse with security, but the reward is their $2.32 burger with chili, onion, mustard and the biggest, fattest tomato slice of any burger. 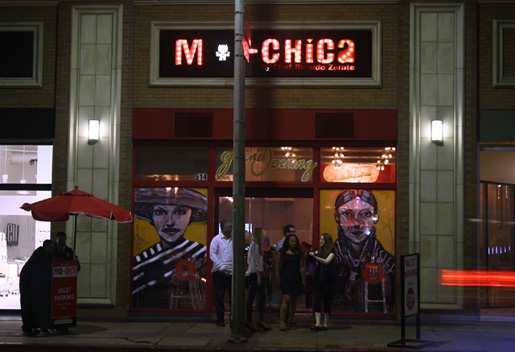 To keep you current with the latest in happening dining destinations, I present some opened in recent months: Mo-Chica is now downtown on 7th Street serving Peruvian comfort food by Chef Ricardo Zarate; and in Silver Lake on Sunset Boulevard, Black Hogg serves a "buttery" lamb burger to the local hipsterati. 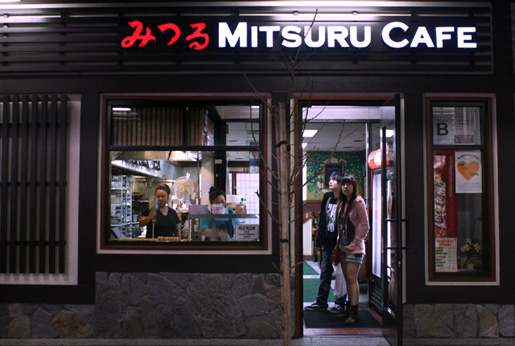 I also include a few of the tried-and-true local favorites. When I'm downtown checking out the art at the Geffen Contemporary Museum on Central Avenue and 1st Street, I always make it a point to go across the street to get a couple of hot-off-the-griddle $1.25 Red Bean Cakes from the Mitsuru Cafe in the Little Tokyo Japanese Village Plaza. The bean cakes (called Imagawayaki) are hockey puck size pancakes filled with sweet bean jam -- best eaten when first served, hot and scrumptious. 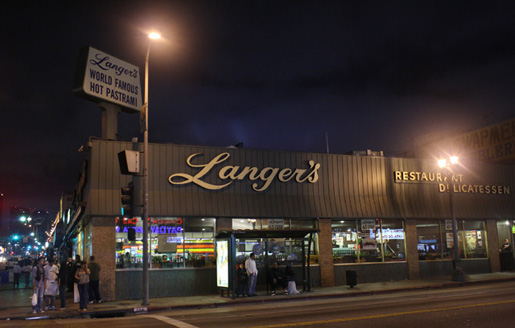 And Langer's Delicatessen, which serves the best pastrami anywhere (James Beard America's Classic awarded,) closes down at 4pm every day. That leaves them out of my Restaurant Nocturnes series -- but wait, they had a 65th Anniversary a couple of weeks ago and stayed open until 9pm. So I shot them open at night! This is footage you'll want to see, as you are more likely to see a total eclipse of the sun than to witness Langer's open after dark any time soon.

I saved the best for last: Soul Burgers, located right across from the Hollywood Park Racetrack in an Inglewood strip mall. These really are some of the best burgers in town. So unusual too -- who would believe you could dress a burger with cooked collard greens, pureed yams and turkey dressing, and it would be so dang good. But tasting is believing. When you bite into a James Brown Soul Burger your taste buds will shout and do the splits! Just listen in as chef Toni testifies (she's the owner and a former Barry White backup singer) -- you'll become a turkey burger believer.

So, savor the ride through my latest compilation, Restaurant Nocturnes X -- and don't forget that after the video, I provide a website link for each restaurant in order of appearance; to learn more, just click on any name.