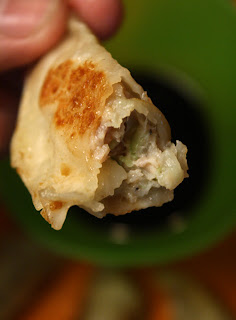 Trader Joe's has some serious competition in the frozen party food department! I've been to many gatherings where the baked samosas, meatballs, or dips and chips come from there; and they will always have the most interesting and varied selections. But for my latest Deal of the Day I would like to introduce you to an appetizer that is cheaper and as tasty as any Trader Joe party platter treat. (Trader Joe's is a L.A. grocery market curating unique and healthy fare, often at a great price.)

I've seen these packages of Gyoza in the 99c only Store frozen deli case for some time now, but was wary to give them a try, until now. Boy, am I glad I finally broke down and shelled out 99.99 cents for this 7 ounce package of Vegetable & Chicken Potsticker/Gyoza by Tasty Select. This is a fantastic Deal of the Day -- no sense wasting time here with my rating. On a scale of 1-9, 9 being best, these Japanese style dumplings get a perfect 9 !

And they're wife tested and approved (she requested I pickup more packages on my next 99c only Store trek.) 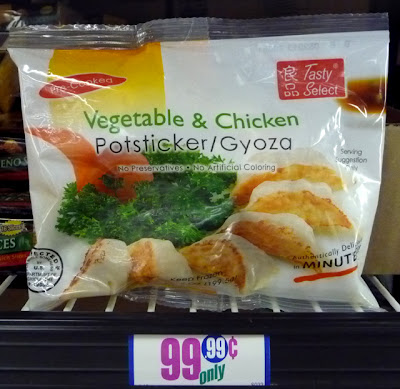 The Gyoza are plump, tender, and very flavorful. Strands of sliced cabbage are threaded through ground chicken to add crunchy texture. I guess if I wanted to complain, that is the only vegetable I could discern. On the package the vegetable ingredient list includes onion, garlic and soy bean -- I could taste a little garlic. Since "vegetable" is listed first on the package, I was expecting more of a balance. 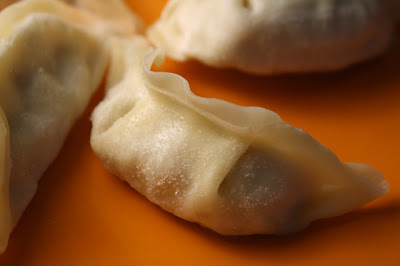 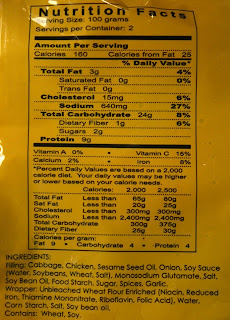 No big deal really, because the Gyozas are fat with ground chicken -- that's what I'm after. Japanese restaurant Gyoza is typically filled with ground pork, so this is a lighter take, and it's good. I got 10 plump Gyozas from the package. The label also points out that there are no preservatives or artificial coloring.

I do have a quibble with the cooking directions though. It calls for steaming them in water so they don't stick to the pot or pan. This defeats what makes Japanese potstickers different from Chinese dim sum dumplings: for Gyoza you want to lightly brown the tender wheat flour wrappers for the extra caramelized color and flavor. (And obviously, as the package photo shows, the Gyoza are mainly sauteed to get that color.) 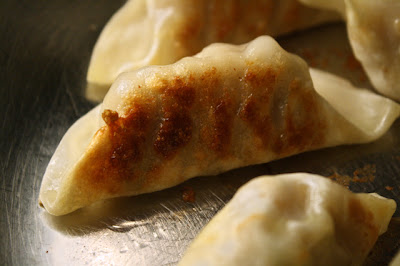 Since it takes about 10 minutes to brown them on a couple of sides, that is plenty of time to heat them through, even when added to the pan fully frozen. The main thing is to add a tablespoon of oil (or cooking spray) to the pan so they do not stick. (There may be some wrapper tearing, but it's not too much -- the chicken and veggie stuffing is not mushy, so it won't spill out.) They just taste so much better sauteed than steamed -- just my preference. Of course, you can follow the package directions for steaming. 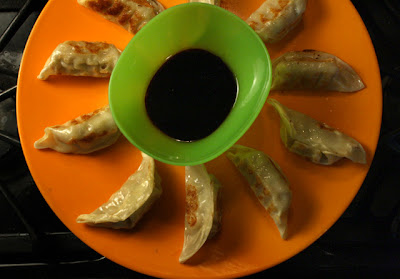 This is a great Deal of the Day, and when you serve them at you next cocktail party you can say you got them from Trader Joe's -- go ahead, I won't tell anyone.

And as a bonus, here is a Gyoza dipping sauce (it's a delish all-around sauce) recipe for you. 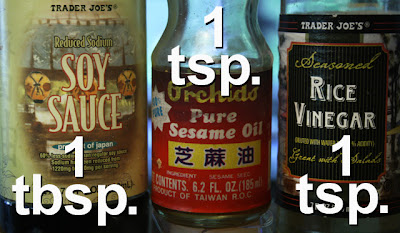 Gyoza Dipping Sauce (for about 10 Gyozas - double amounts if needed) 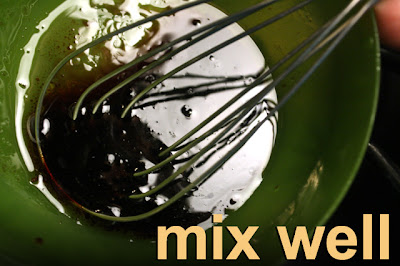 Directions
Just whisk it all together in a small bowl, just before serving Gyoza (oil and vinegar tends to separate when left alone for a while -- or keep dipping sauce in a container with a top, so you can shake it up.). Once Gyoza are bitten open they will soak up the dipping sauce much better. 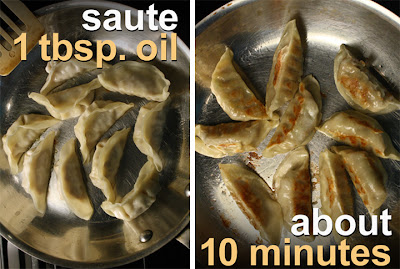 I just made these and they were "AWESOME"!!! About 10 came in the pack. I chose to deep fry mine and ate them with sweet chili sauce. I am definitely running back in the morning to purchase more.

I discovered these about 9 months ago and they are the 1 st thing we check for in the frozen section of our Dollar Tree. They are perfect like you suggested brown on 2 sides. We also stock up on the 10 Pak of Spring Rolls which are a 10 also. The 2 together with some hot wings make great party appetisers along with teriyaki and sweet chili sauce. Yummy...

Hola! I like potstickers put don't like to tear them. To avoid the tears, during last two minutes of cooking add 1/4 cup chicken stock to pan and cover with a lid. Steam loosens potstickers enough for removal without tearing the wrapper. I learned that from watching Good Eats.

I swear by these!!! My boyfriend also loved them! (He usually is a plain eater). They are so flavorful and well-balanced! I get at least 2 packs whenever I go to the 99 ��

.... Or just add them to chicken broth or bullion for a quick lunch

So take your 6 dollars and get 60 potstickers instead. 😊

Will look for the spring rolls next time. 😊

I first tried these in this post years ago -- and they are still a great tasty deal ;-p