If you've lived in or visited the South you were exposed to bags of  fried Pork Cracklins found in the liquor store potato chips rack. Over-salted and dried out, those deep fried pork rinds are okay, but nothing like the recipe I have for you. 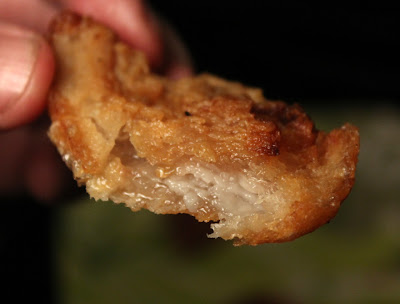 Mexicans have their own version called Chiccarones. And if you don't have a neighborhood street taco stand or taqueria with a vat of lard slow frying slabs of pork skin, then you should try out The 99 Cent Chef version. Fresh or homemade fried pork skin is so much tastier than packaged. First there are several textures: from egg shell shattering skin to a creamy rendered fat layer. The Italians also know how to handle pork skin by wrapping pork loin with it and oven roasting, for a Porchetta. This is something you may not eat often, but it's a real treat to try instead of throwing the extra skin away. And I always find packaged pork rinds way too salty, so now I can control that with homemade Chiccarones.

If you read my recipe earlier this month for Carnitas (Mexican slow cooked pork) you will have noticed the hunk of skin I removed from the large pork shoulder. I stewed the meat with a small piece of it and deep fried the rest to make Chiccoron Tacos. Pig skin is also sold at some ethnic markets like my local Superior Groceries for $1.19 per pound. 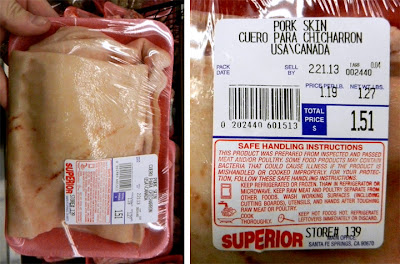 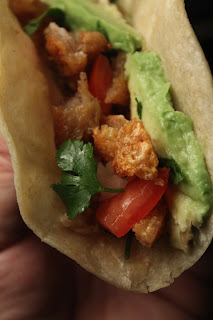 If you have never tasted deep fried pig skin tacos, then you are in for a treat. I know it sounds gross, but trust me -- crispy Chiccarones with chopped onion, tomato, cilantro and a wedge of avocado, all wrapped in a warm corn tortilla, is taco nirvana. The rich crunch of fatty fried pig skin pairs perfectly with cool chopped cilantro, tomato and creamy avocado.

Directions
You need a sharp knife to slice along the meat and fat line under the pork skin. Some recipes call for removing the white fat just under the rubbery skin, but when cooked this fat turns creamy and soft (a delicious contrast to the crunchy skin,) so I like to leave it on. 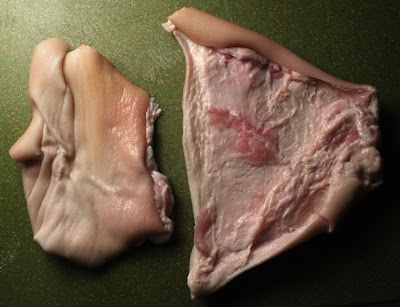 Most of the fat under the skin is not very thick, however there were a couple of areas were the fat was more than an inch thick. You want to cut those chunks into smaller pieces so the fat cooks through and softens. (Even when you are all done there may be a few pieces that seem rubbery and undercooked in the middle, just cut them open and grill the fat side down for 5 minutes, or so, when you make Chiccaron Tacos later - the extra rendered oil will nicely coat the warming corn tortillas.) 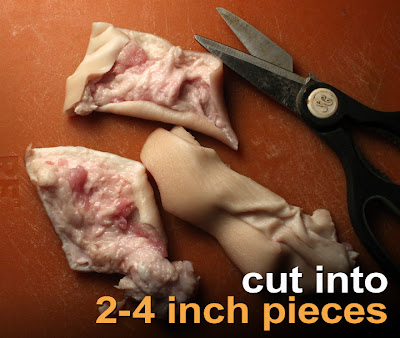 It takes a long time to fry the pork skin over a low/medium heat (you don't want an oil splattered all over the stove top by using a high heat.) There will still be a few splatters, but not too bad. If you have a deep fryer then you can go hotter (and quicker,) or if you have a splatter screen, then use it. A deep pot will make less of a mess. This is what happens when you deep fry fat and skin. 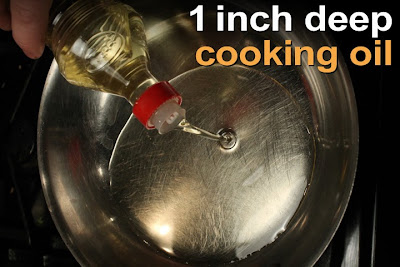 Add oil at least an inch deep in a frying pan. I used a low/medium heat to cook the pork skins. Carefully add pork skins to heating oil. 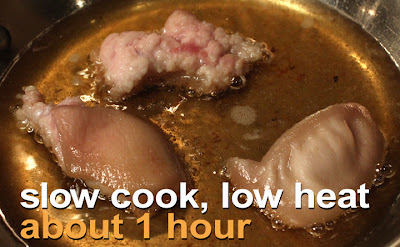 Over a low heat it takes about an hour to cook both sides of the pork skin. You can walk away and check on low-heat frying Chiccarones every 10 minutes or so. (But hang around for the first 10 minutes to make sure the splattering oil is not out of control.) 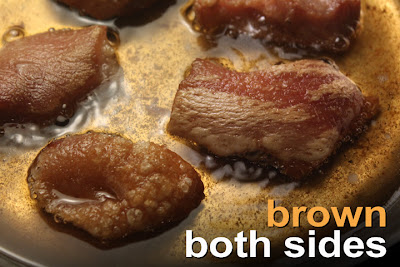 The Chiccarones are ready when the skin side is golden brown and crunchy like an egg shell. (Don't let the skin blacken though.) The outer fatty side will still be soft, but browned, while the middle is white, but creamy soft like warm butter. 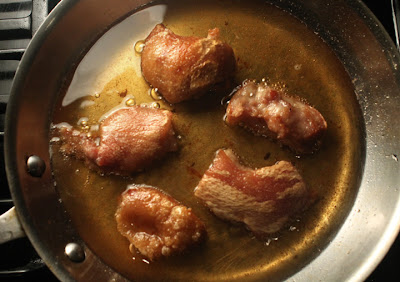 For Chiccaron Tacos just heat up a couple of corn or flour tortillas to soften them (okay to microwave 30 second or so.) Break up Chiccarones into bite size pieces. I like to add chopped onion, tomato, lime juice and cilantro (it's called a Pico de Gallo.) A couple thin slices of avocado are a delicious contrast to crunchy fried skin. If you have a favorite salsa then use that -- hot sauce optional. 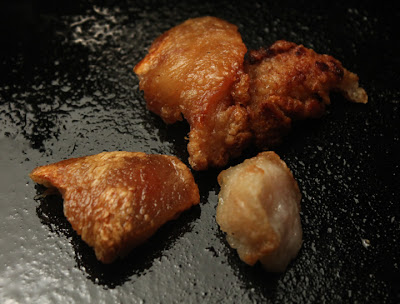 If you are heating up Chiccarones later, then saute in a pan or zap in a microwave until hot. Any rendered fat can be used to grease and flavor a pan for warming corn or flour tortillas.
Posted by 99 Cent Chef at 1:03 AM