The Provocateur d'Epicure is back with another video that's part of my Taco Month series. This is a cautionary taco tale. Yeah, knocking Jack in the Box's 2 Tacos for 99 Cents is too easy, especially living in Los Angeles, the capital of the taco. But I can't allow this fast food joint to soil the reputation of our most humble and quintessential Mexican street food classic. (The Cheap$kate Dining review video is at the bottom of this blogpost, which offers my most outre denouement yet.) 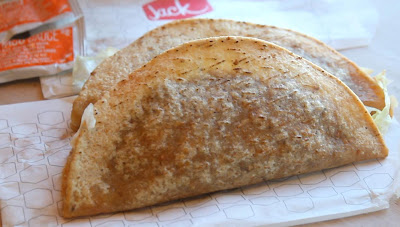 Now, I like gringo-style Mexican tacos. I've had my share of crunchy shelled Taco Bell and Del Taco ones. Their serviceable versions go down fine for drive-thru dining. Mitla Café, in San Bernadino, is believed to have first developed the hard-shell Americanized version: spiced ground beef topped with lettuce, tomato and shredded American cheese. Glen Bell operated a hamburger stand nearby and copied this recipe when he launched Taco Bell in 1962 in Downey, California.

For my own fast food version, using low-fat and cheaper ground poultry, (of course, you can use ground beef,) just click here to see the recipe. 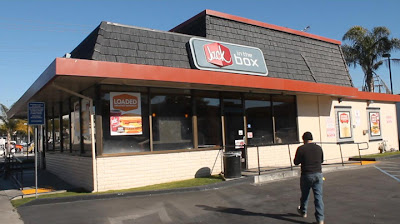 I've been working right around the corner from a Jack in the Box in Santa Monica, and have dined on their 99 cent Chicken Sandwich and Jr Jack (for just over a dollar) every month or so, but I have to draw the line on the 2 Tacos for 99 Cents from their Value Menu. It's been years since I had one and now I remember why.

I guess you could say I really decided to get Jack in the Box's tacos to test the limits of my new video series, Cheap$kate Dining. The rating system is 1 to 9, 9 being best -- with any entree that's rated 5 or higher worth a try. There is an upcoming Cheap$kate Dining episode that will rate a perfect 9, so keep checking back. And now I have one that rates near the bottom. 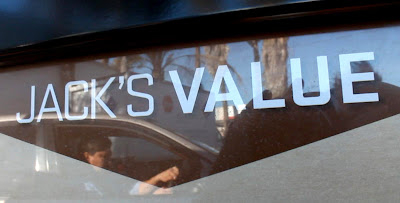 After paying 99 cents (plus tax) I bellied up to the counter and noticed the cook with a fry basket tray holding a row of folded meat-filled tortillas that she dunked into a vat of hot oil -- not a good start.. 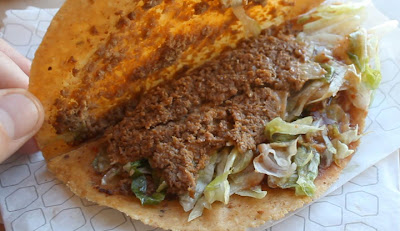 I made sure to load up the to-go bag with taco sauce, just in case. Back in the office dining room I unwrapped one taco and dug in. The first thing you hit is the crunchy shell, then soothing American cheese and shredded lettuce -- not a bad start. With the second bite I got to the meat of the problem. 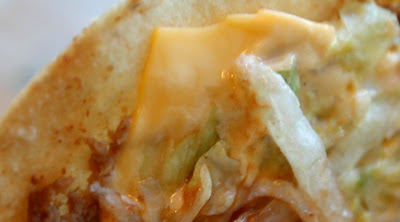 The middle of the taco was soggy from the mushy protein mixture. Unlike other American-style tacos with real gound meat, this version had no textrure - it was just a beef-flavored paste slathered with a bland taco sauce. (I found out later that the 99 Cent Tacos are a mixture of beef and soy - which is fine, expect that the tast is off.) 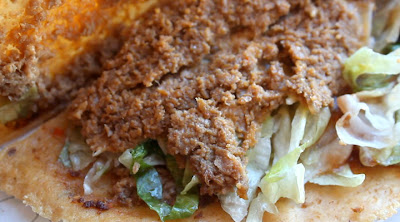 Well, the best thing I can say is you do get 2 Tacos for 99 Cents, but that is also the problem. Now I had to finish the second one -- good thing I packed extra taco sauce! 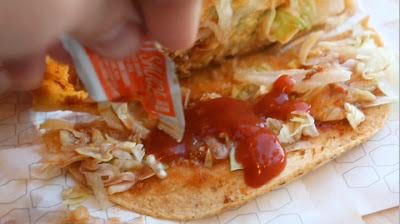 Things did not get better. Compared to Taco Bell or Del Taco, Jack in the Box's are scraping the bottom of the fast food barrel. But perusing some of the comments on my YouTube channel (click here to read them) they are liked. (No problem with that, we all have our guilty pleasures - one of mine is McDonalds Filet-O-Fish sandwiches; especially when they go on sale during File-O-Fish Fridays.)

You can probably guess the number grade I give Jack in the Box's 2 Tacos for 99 Cents. So, on a scale of 1 to 9, 9 being best, the tacos rate a... well, you will have to watch my video below for the rating during the wacky ending -- I think you will get a kick out of it!

99 thanks to Chad Reder for his camerawork.
To view or embed from YouTube, click here.
Posted by 99 Cent Chef at 7:50 PM

Nice review with pleasing pics. However, I must disagree with thee. One buck for two greasy tacos is a great deal for a societal dreg such as I. The Jack in the Box taco is raw, brutal basic eating and hits the spot in my blue-collar working-poor class opinion.

hey Scott, I feel the same, just lucky that here in LA we have a lot of $1 taco joints to choose from ;-p

After reading the authors reviews, got the munchies. So I hitched up the horse and hopped in the old cart and drove to our brand new neighborhood JACK. Ordered 8 tacos. Ate 4 and shared the others. Mmm mmm good!!

Be glad you have a damn JACK to go to! I crave those tacos and have to drive 3 1/2 hrs to get them. Yes,I have done that...a few times. Those tacos are just one of a kind, and I LOVE THEM!

Nigga plz stfu .99 cents and you going to bitch omg tell your mom I want my $10 back as she was sub par and thoes tacos kick ass...get a life quit writing long ass pages on jack tacos loser

Cheap shots on a cheap product. I have eaten many of these and have never gotten indigestion, unless I combined it with greasy fries, greasy hamburgers and etc.
I am grateful to Jacks for offering people on a limited income some hot food. I think the reviewer is unfair. You can easily buy heart attack on a plate somewhere else for 10-20 dollars. Stick to some scientific facts. These small cheap portions can satisfy hunger and be all right, even healthy in small amounts. Healthwise these tacos compare fine to Sizzlers, or other outlets.

Thanks, Jack, keep on, and give us some cheap beans and rice, wouldcha please?

Breezy and Me said...

It is what it is. When I am broke I rotate between these and the McDonald's $1 cheeseburger. I like my tacos straight up - no bagged lettuce or chili powdered ketchup sauce. :)AND if you go on line you can get two more for free.

Horrible review. It's all fine if you don't like the tacos. But the whole bathroom tossing yer cookies thing was just a cheap shot and a failed attempt at humor. I've never gotten sick from eating them. I consider them a miracle of 21st century U.S. society and culture. Two! Yes, that's two tacos for 99cents!! Given the value of a dollar these days that's an amazing price. And while it's true that the meat is "pseudo-meat", so what? That dip into the deep fry delivers all the flavor ya need.

it's an acquired taste I guess... I don't know anyone who doesn't like them, I also don't know anyone who would say they're really good tacos either (compared to other fast food tacos)...& when given a choice we might choose taco bell, their tacos are 6 times as much (about $1.50 per taco)...they are a food experience all their own, & I don't know that I would consider them to be in the same category as other American style crispy she'll tacos...I've never known anyone to get sick on them, but I've known people that have gotten sick on much more high class fare, so I believe that it's all in the digestive system of the beholder...either way, the reviewer didn't care for them, that's cool...the only person I do know that won't eat them (anymore) also won't eat anything that isn't organic, gluten free, fat free, carb free or extremely overpriced...in other words, these tacos are not for the most sophisticated of palates, or for anyone who can't get down with some great cheap grub...either way, I'll still be at Jack in the box at least once a month for my 4 cheap tacos...