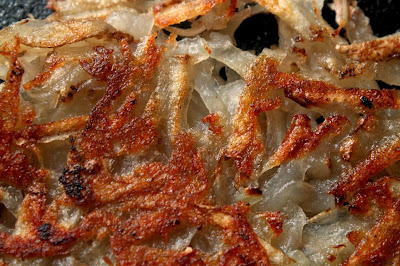 I like them all. With the cubed kind you can add a lot of tasty sauteed veggies like onion, scallion, herbs, and bell pepper (and here's my recipe for that type.) With some fast food types you can eat the large crunchy wafer, dipped in ketchup, with your hands. But there is something about Grated Hash Browns that I like best. 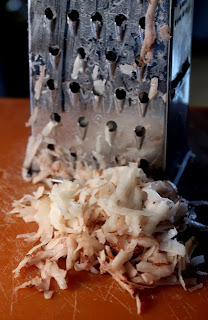 Mainly, it's the crunchy outside and tender-moist inside that work together sublimely. And it's simply done by grating the potato. That makes it easy to spread out on a pan to get even browning and crunch. I guess they are similar to Latkes, except you will use a lot less oil, and no egg -- these Hash Browns are much lighter.

I like to add some grated, or fine-chopped, onion to my Hash Browns, but if you are a purist, it's okay to leave the onion out.

That's it, just one or two ingredients, a little oil, and salt and pepper to taste. 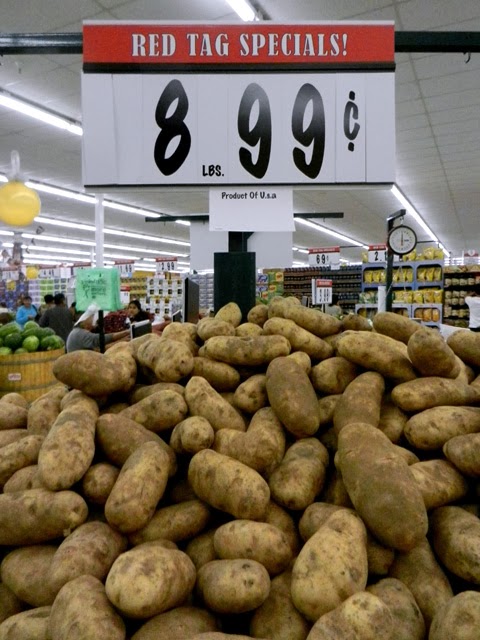 And Spuds are a bargain -- how about 8 pounds of potatoes for 99 cents? Not even yellow onions come this cheap. Of course, I don't get find these prices every day, but I always get them for way less than a dollar per pound. You could use more expensive red and white potatoes if you have them lying around, but I prefer plain old russet potatoes. They brown nicely and develop a crisp exterior.

Also, I like to add a touch of grated (or finely chopped) onion. When caramelized you get a hint of sweetness.

If you have an old beat-up box grater like I do, then fry up some Old School Grated Hash Browns for your next breakfast. (And I don't have to remind you how cheap russet potatoes and brown onions are.) 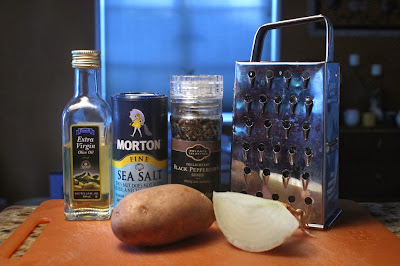 Directions
To prepare potato, use the box grater's largest grate holes. You could also use a food processor. You can remove the potato skin or leave it on (wash off the dirt.) If you are preparing grated potatoes ahead of time then store them submerged in water - this keeps grated potato from turning too brown. Drain when ready to use. (Grated potatoes will turn slightly red/brown anyway, but when cooked, turn lighter again.) 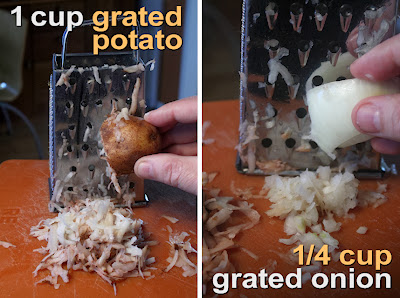 Grate or fine chop 1/4 onion (optional.) Mix grated potato and onion together. Form into a mound and squeeze the onion/potato with a clean hand to get rid of some liquid. This will make less soggy hash browns. 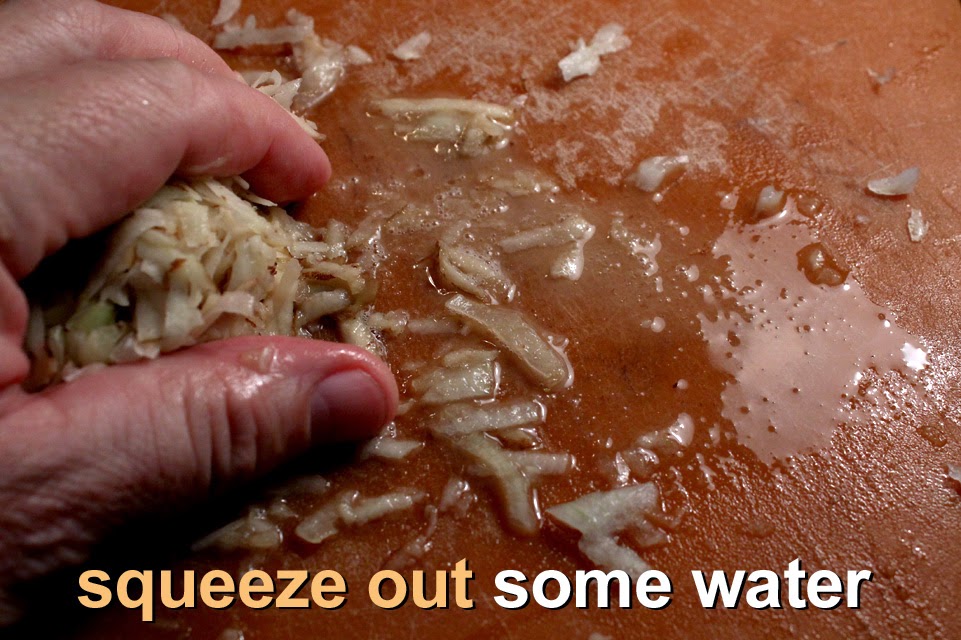 I got one cup total out of the grated potato and onion. (The recipe is easy to double for more servings.)

Add a tablespoon of oil to a medium-hot pan. When the oil is hot, add grated potato and onion. Spread it out to about a 1/4 inch thick. Season with salt and pepper.

You don't want hash browns spread too thin or they will be all crunch, without a soft center. It's really up to you how thick you like your hash brown patty -- try different thicknesses. 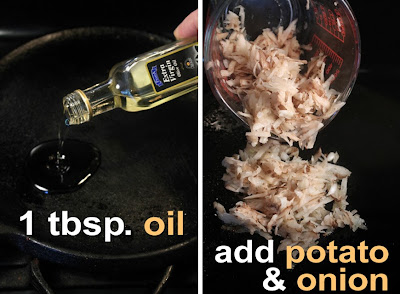 Don't stir or break up the potato and onion patty, let it brown evenly on the bottom. After a few minutes, the edges should start to brown. Mine took about 5 minutes. Loosen with a spatula and peak under the hash browns -- you are looking for a nice brown color. Turn them over when brown enough. 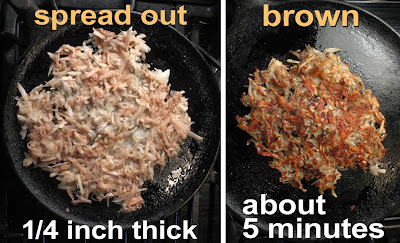 The other side doesn't need to cook as long, just enough to cook through, about 3 more minutes. Of course, if you like your hash browns extra crunchy then cook both sides until brown. Try a small piece of Hash Browns to check for doneness.

Serve with the brownest side up, along with your favorite breakfast. I like sunny side up eggs with whole-grain toast. 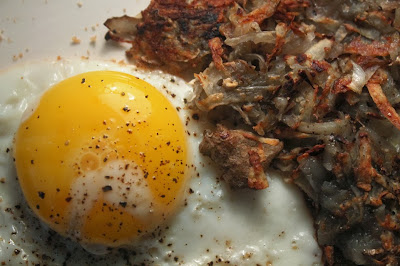